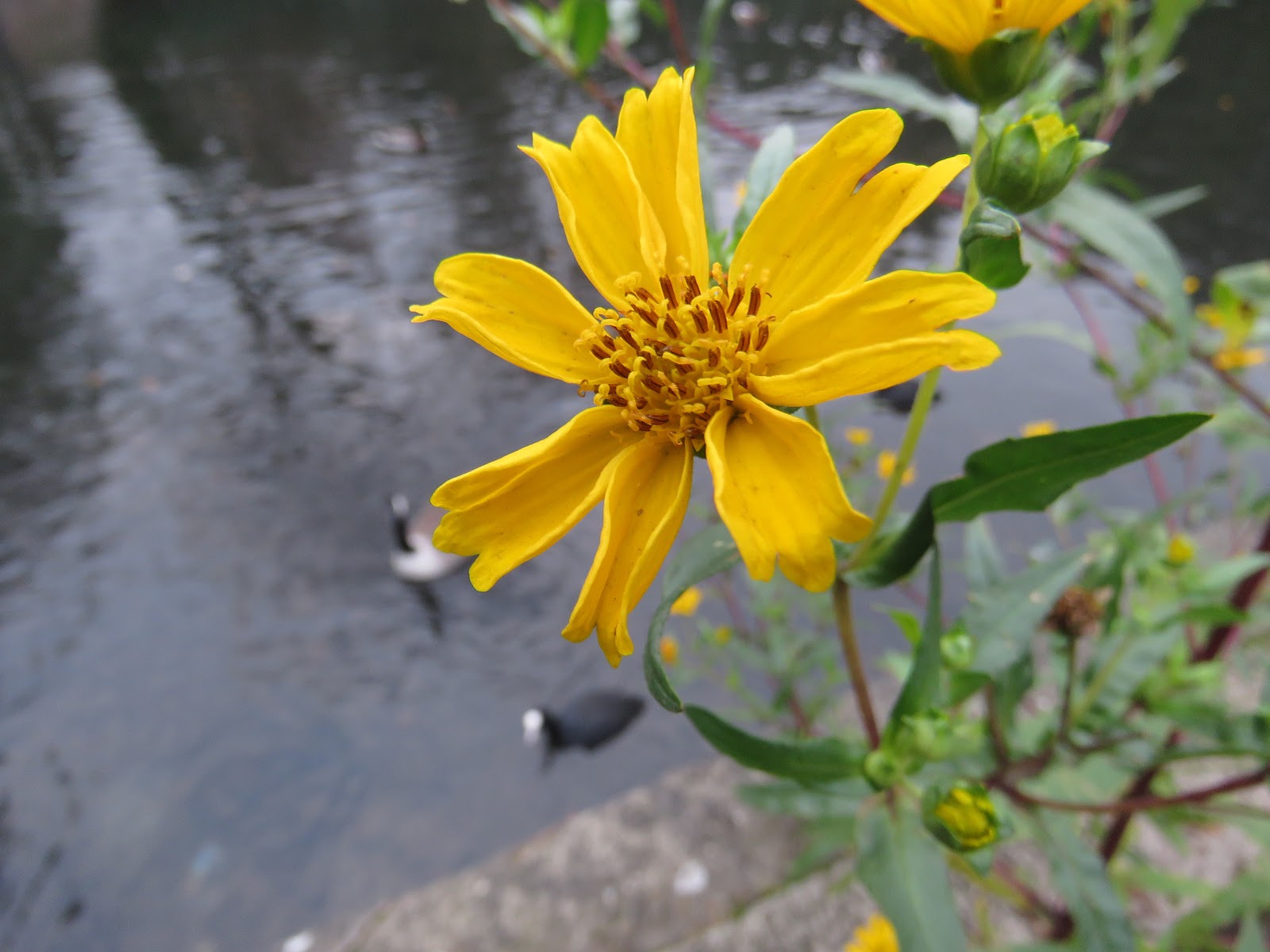 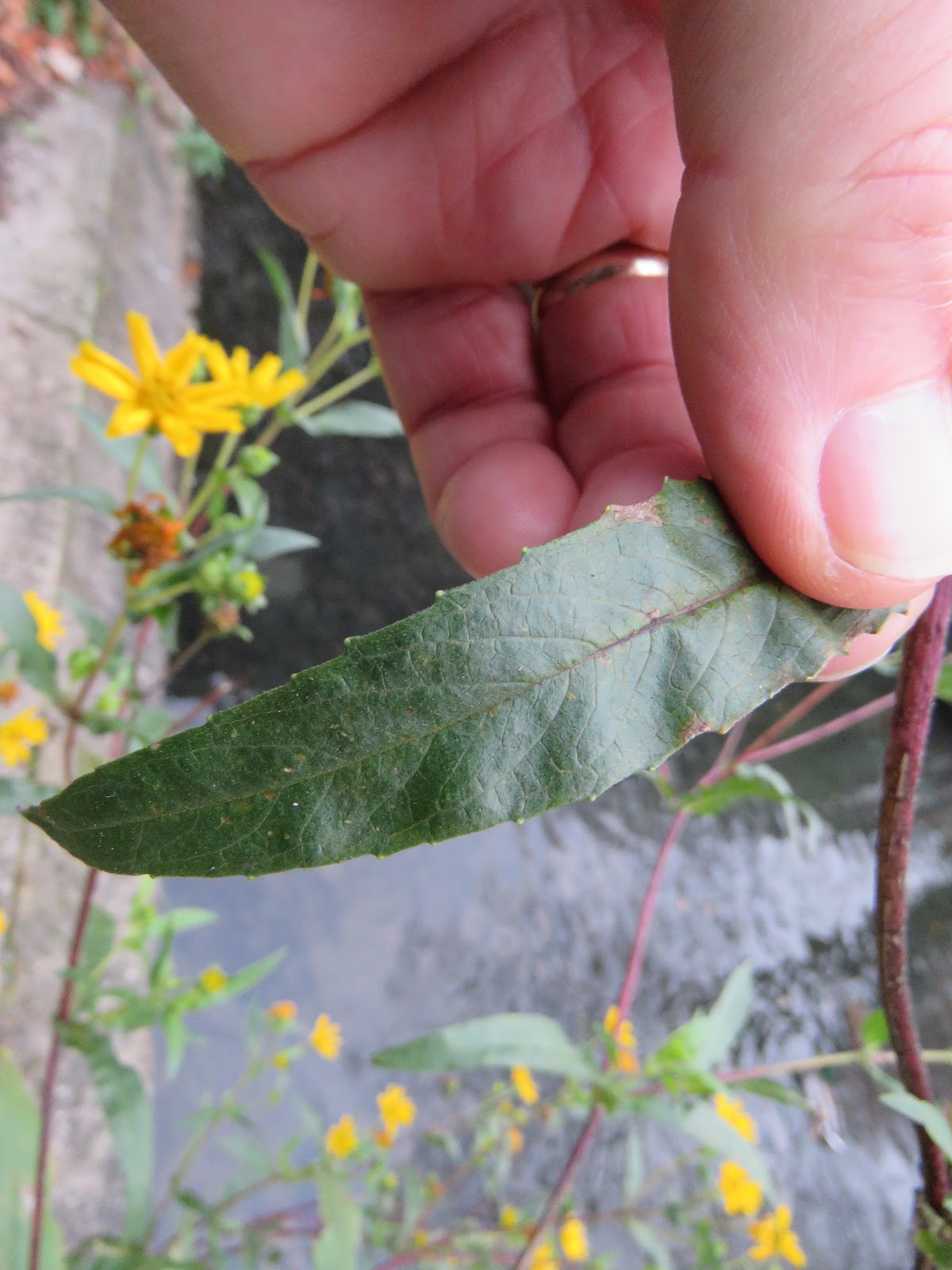 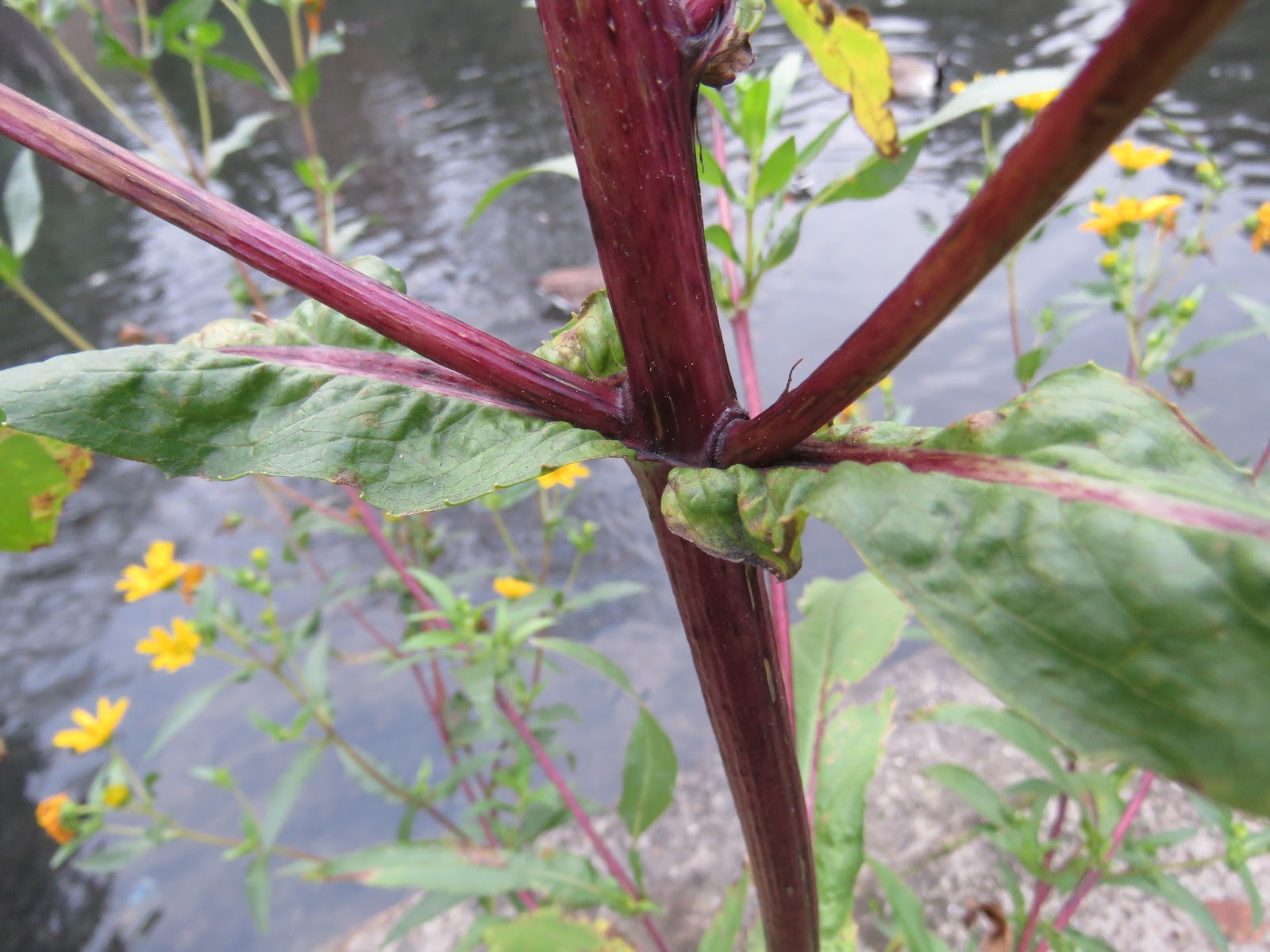 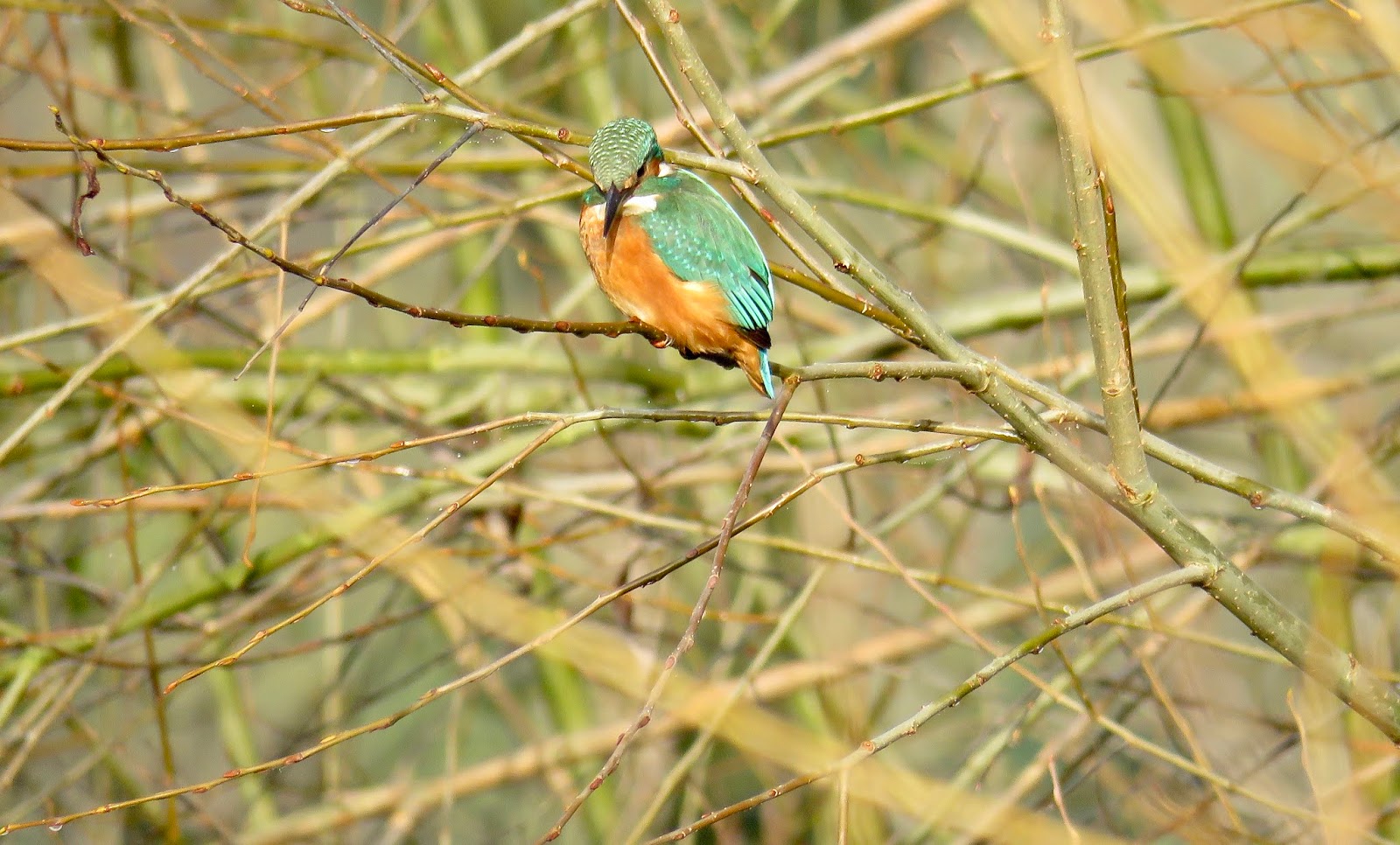 Another expedition along the River Hogsmill towards Old Malden, where I once again paid homage to the Millais painting 'Ophelia'. There is a commemorative plaque on a wall close to the spot where he based the painting (pictured), accompanied here by my picture of what that spot looks like today. The Kingfisher that I saw may have been seen by the great artist as he produced his preliminary sketches, but I doubt that a Little Egret bothered his eye-line as it did mine. 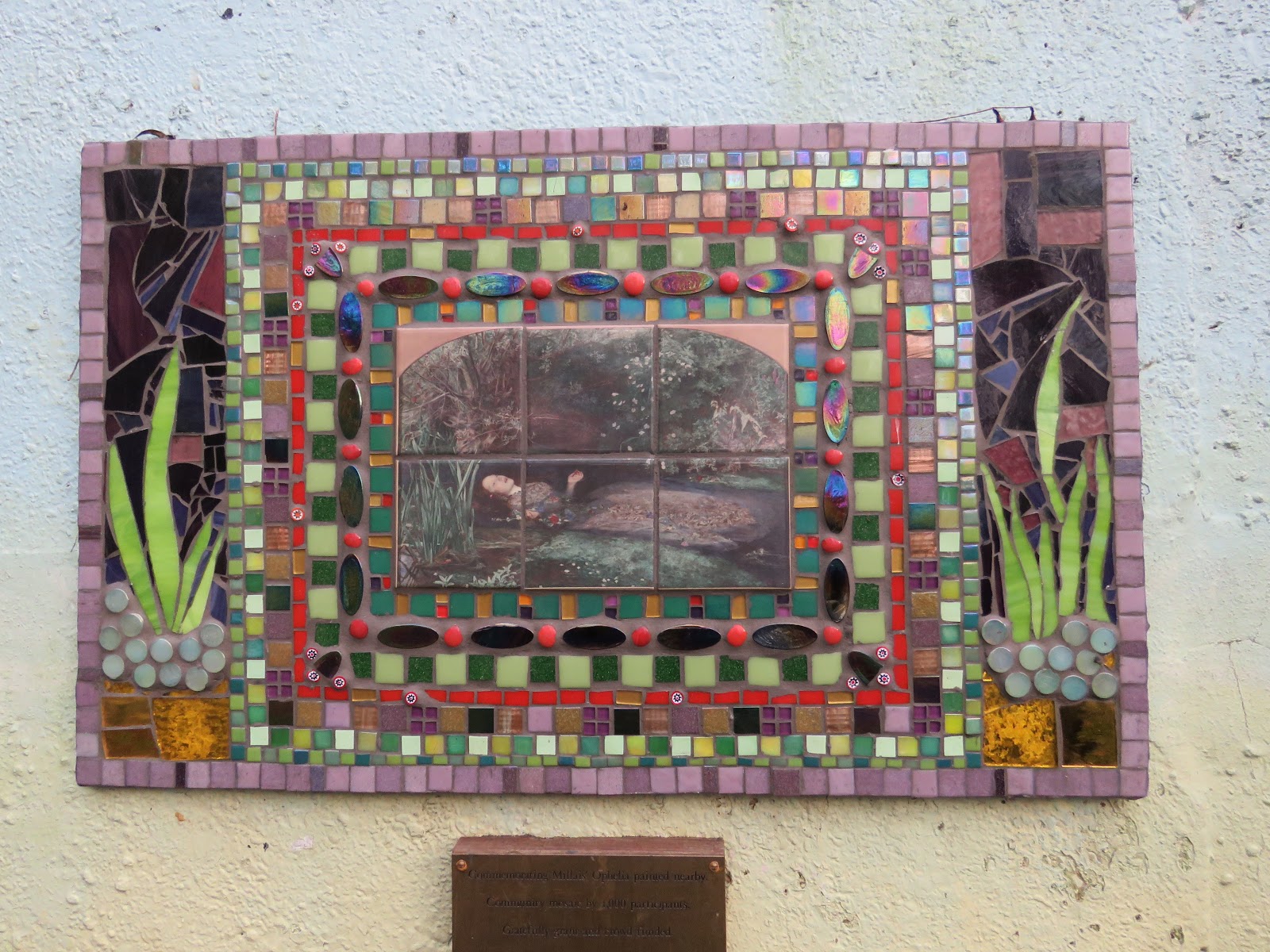 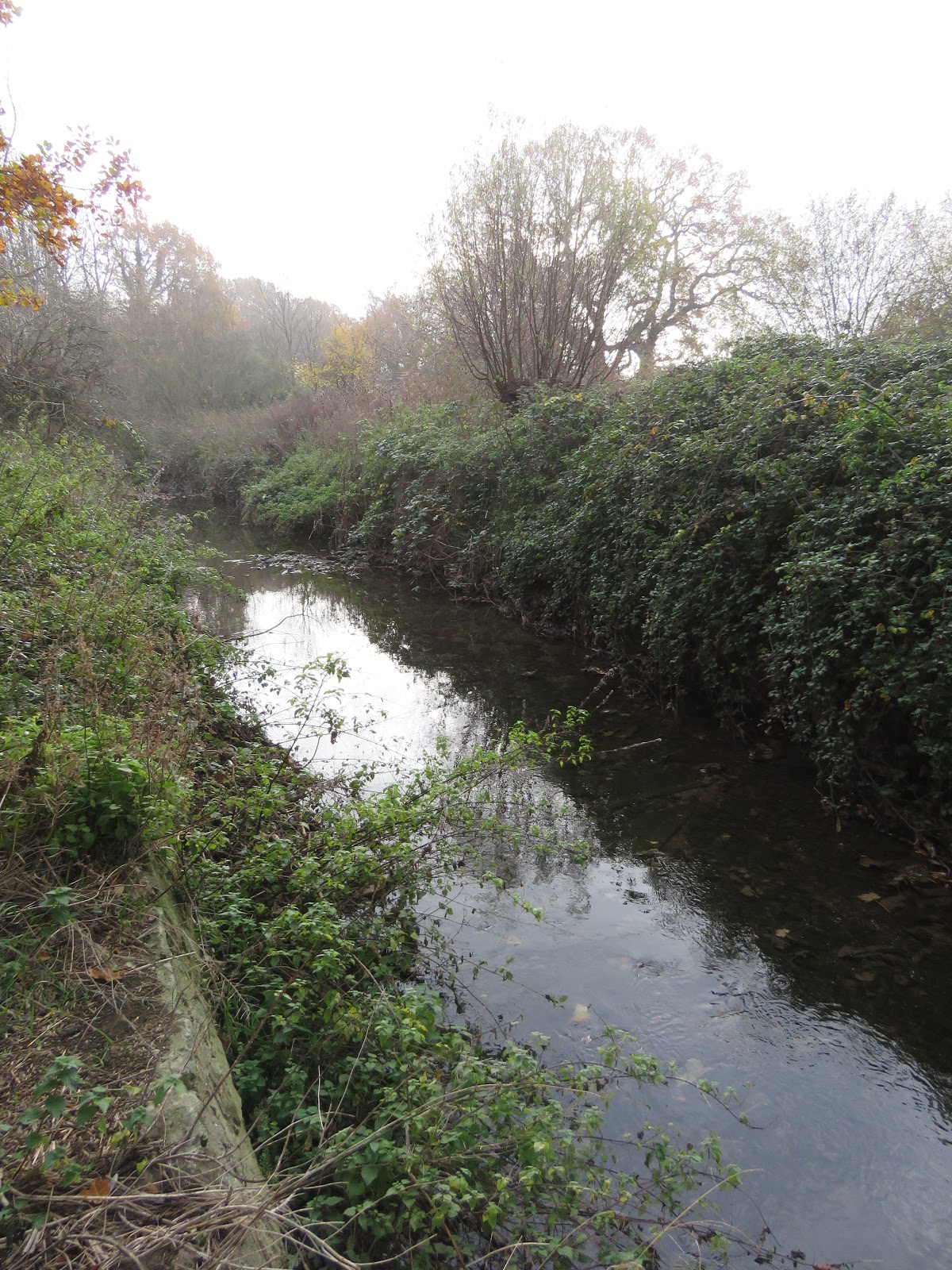 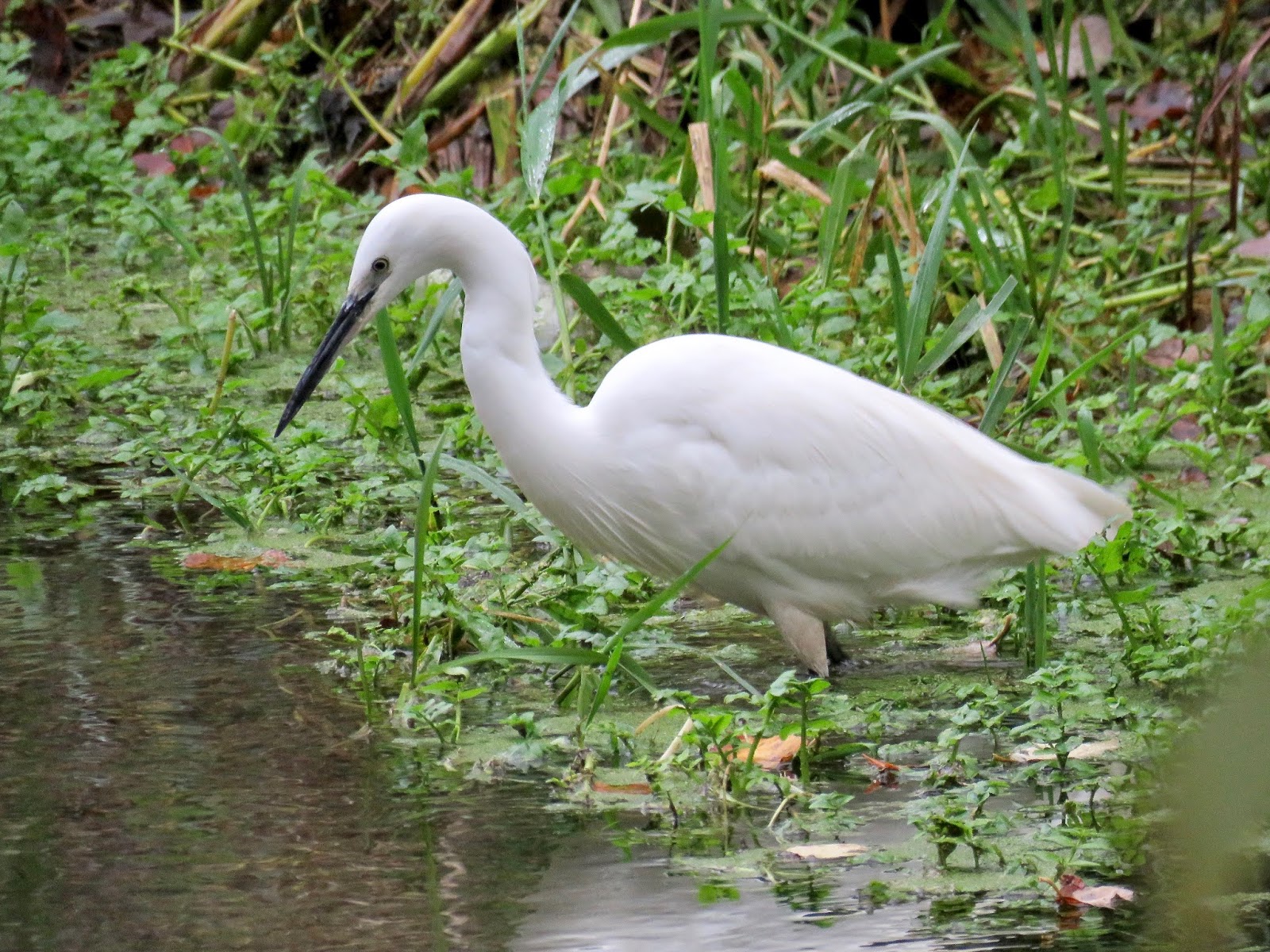 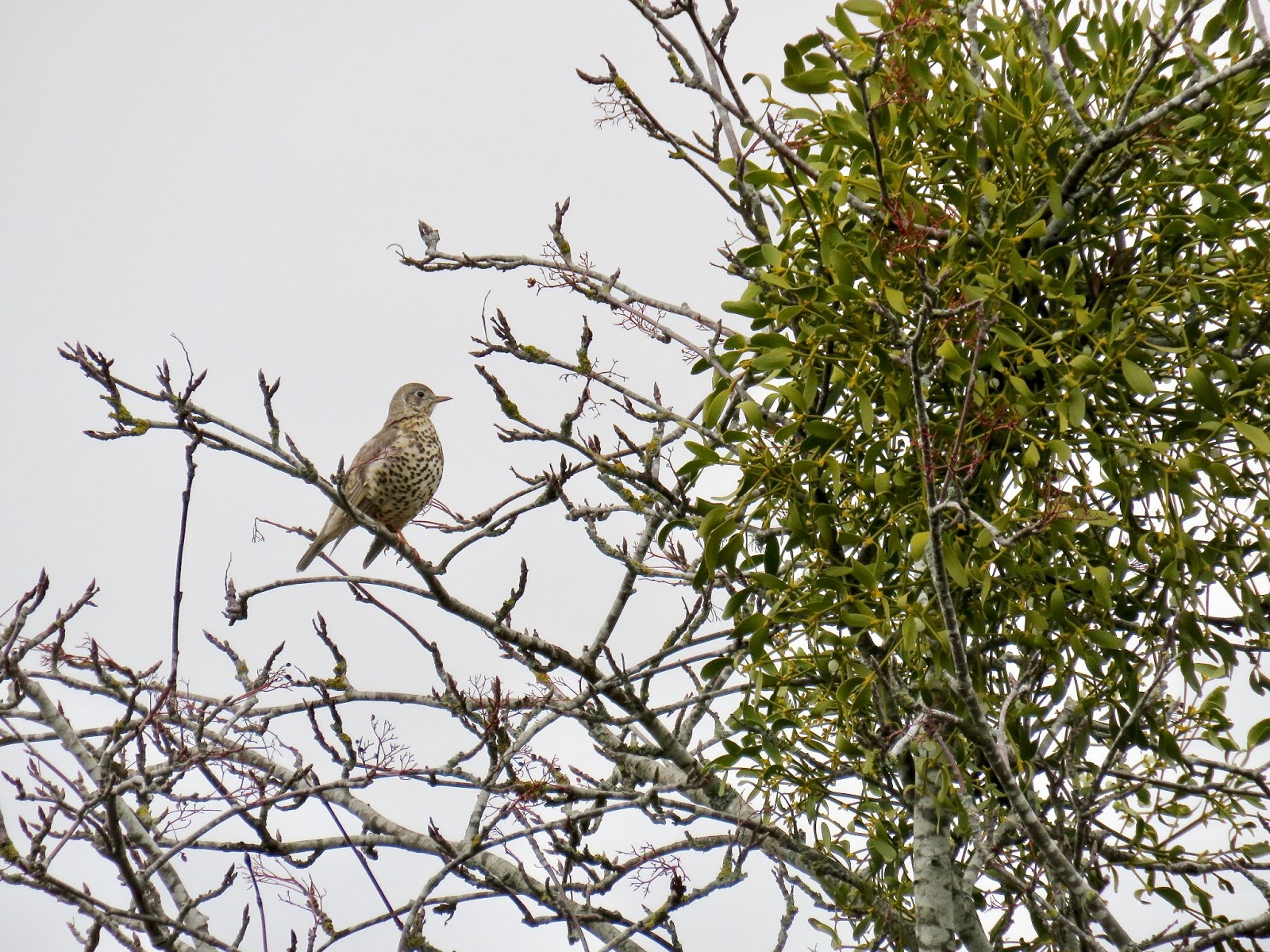 Reigate Heath was the starting point this morning, where the birding quiet was broken by this Mistle Thrush that kept guard over a clump of Mistletoe, feeding on the berries in between bouts of sitting out proud. After meeting up with Brother-in-law Bill, we took a circular walk that included much of Buckland, highlights being 18 Red-legged Partridge, a Little Owl and 150+ Redwing. Further clumps of Mistletoe were seen, including some heavy with fruit. 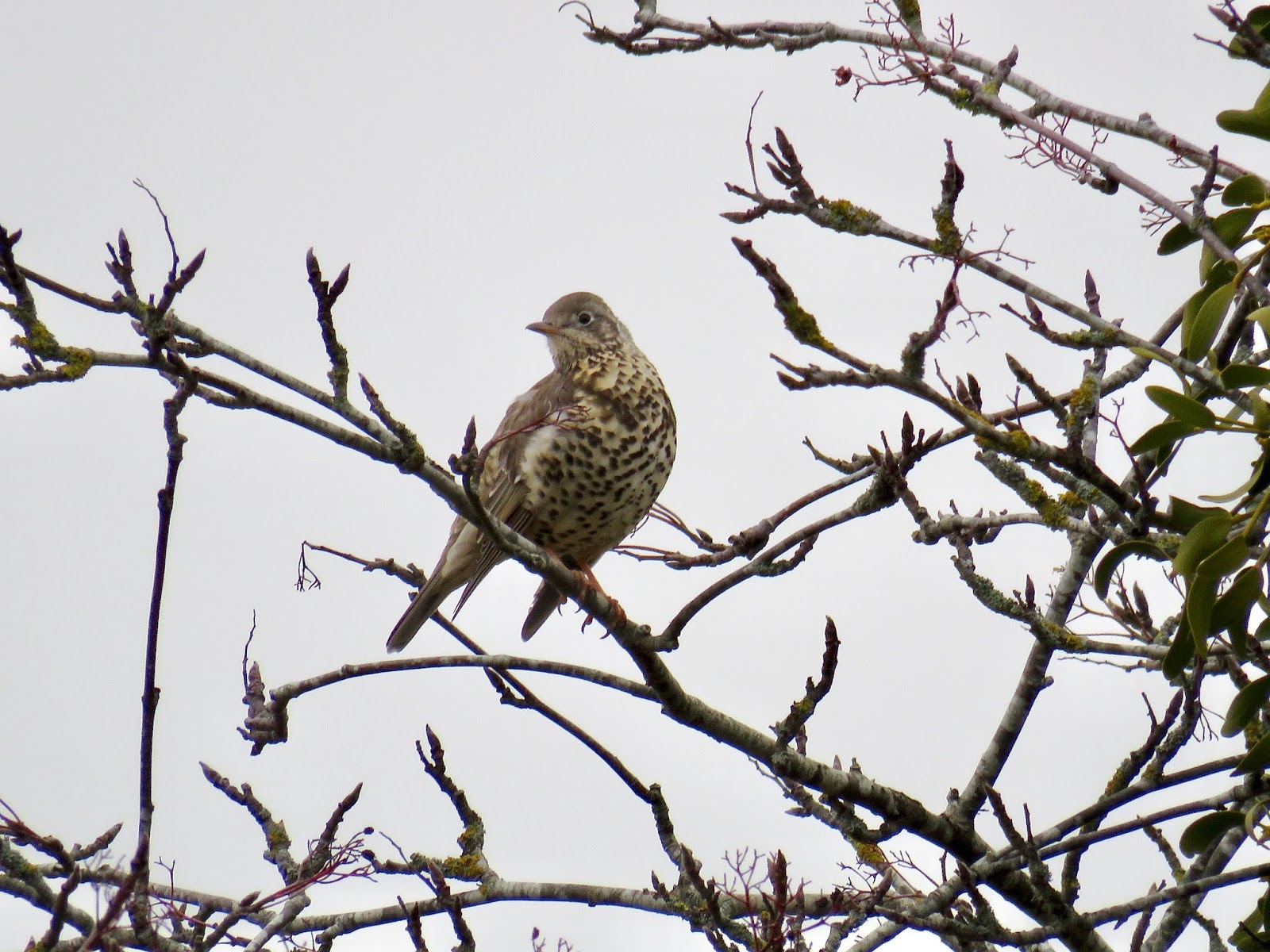 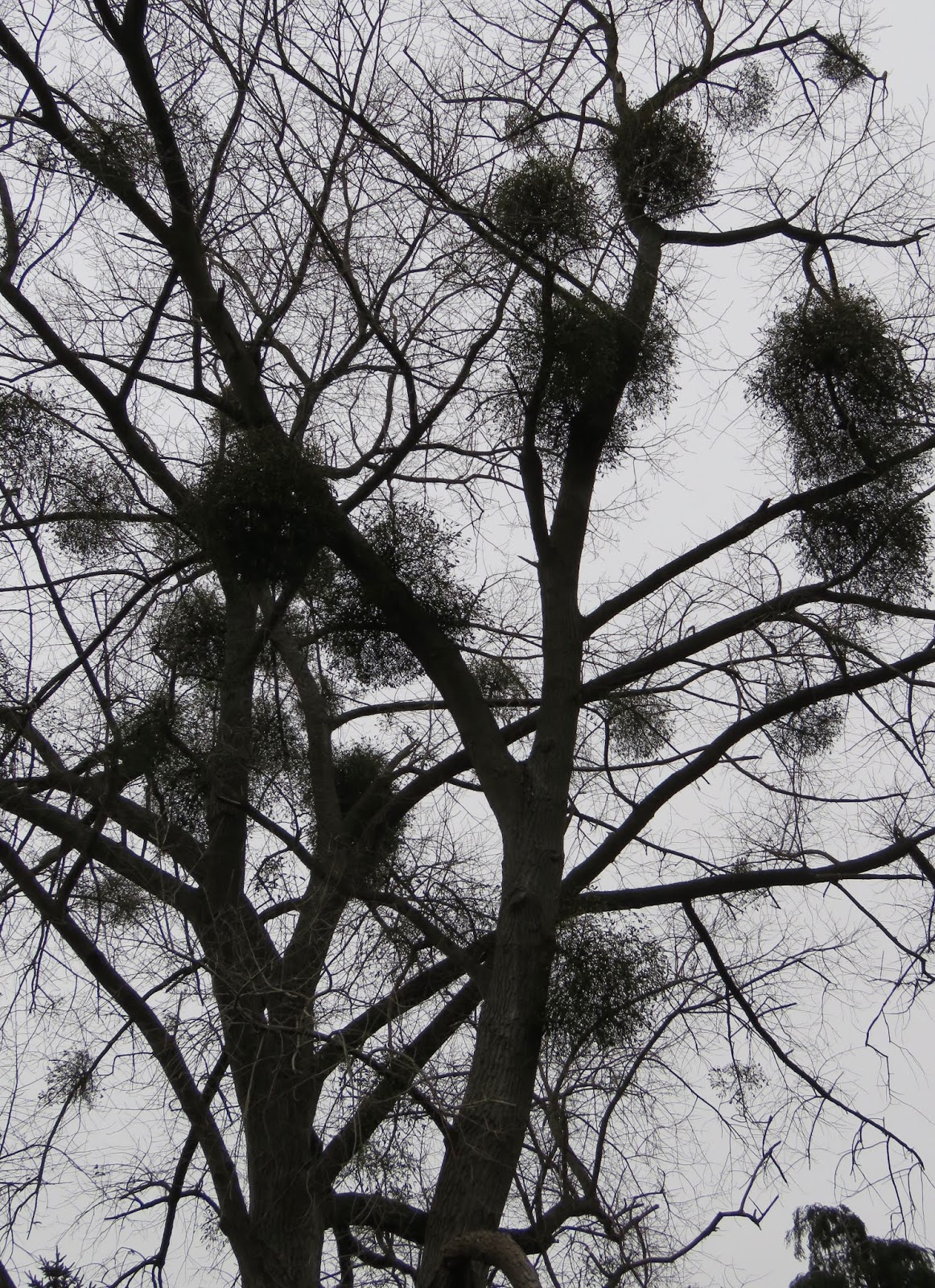 In the murk at Mogador 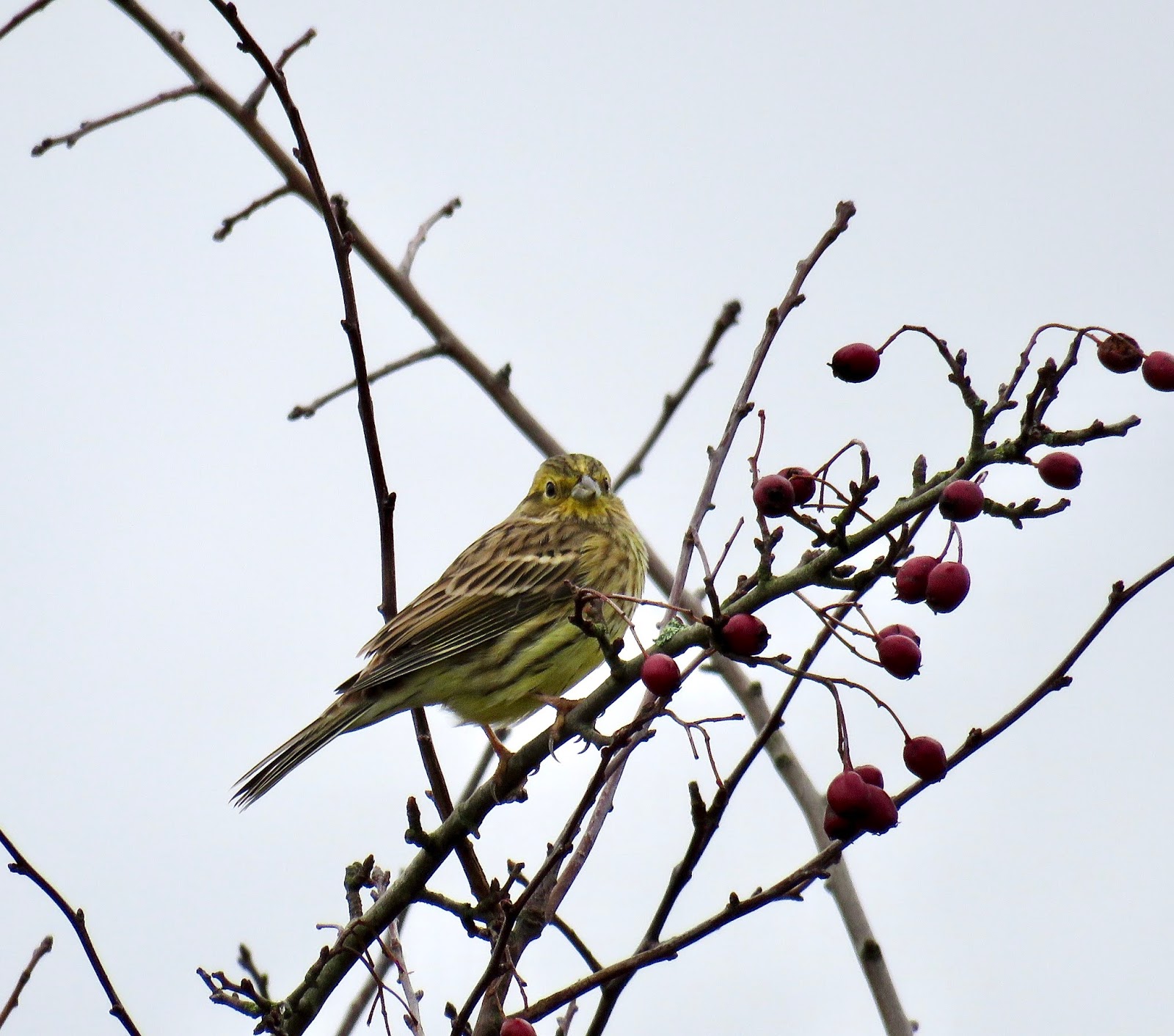 Colley Hill Car Park was a seething mass of metalwork by 11.30hrs - no room to park plus at least another 50 vehicles tucked along the minor road that leads up to it. Fortunately I was leaving the area at the time, having spent the morning birding the farmland at nearby Mogador. Lockdown plays havoc with the human footfall at any of these 'edge of town' beauty spots. With the shops, cinemas, swimming pools and gymnasiums closed, who can blame people for heading out into the countryside. It will be quiet again once the shops and cafes re-open.

Mogador is a relatively small area of mixed arable farmland and pasture, on the edge of Banstead Heath, blessed with big skies and a fair amount of scrub and hedgerow. I have an increasing fondness of the place. Positioned just north of the North Downs scarp at Colley Hill, I have managed to establish a rapport with its birdlife, enjoying spring and autumn migrant action plus a small but select wintering population of thrushes, finches and buntings. It will not be long before something of note appears. It was a pleasure to come across a flock of 30 Yellowhammers (top) this morning, an increasingly scarce bird this far north in the county, although both Holmethorpe and Canons Farm are nearby sites that still maintain decent numbers of this bunting. A single Reed Bunting was with them. Also recorded were 3 Red-legged Partridges, 14 Skylarks, 2 Stonechats, 150 Redwings, 90 Fieldfares and 130 Linnets. It was one of those still, grey and murky mornings that felt as if I were birding indoors. 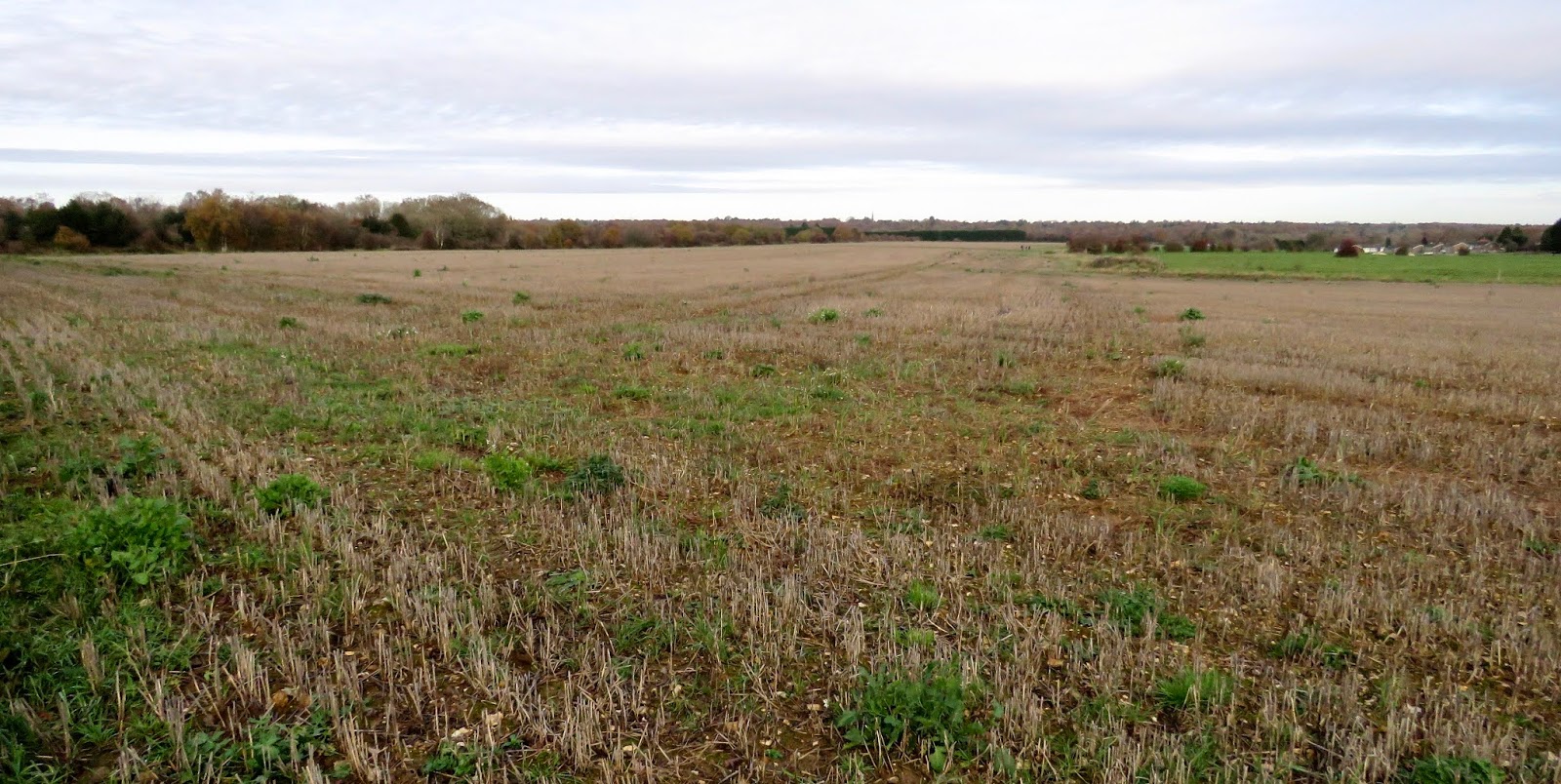 The farmland here floods most winters, sizeable pools more than flashes, and despite thorough checking I've yet to record a wader on them, although I have flushed Common Snipe from the field edges on several occasions and have had Golden Plover fly over. 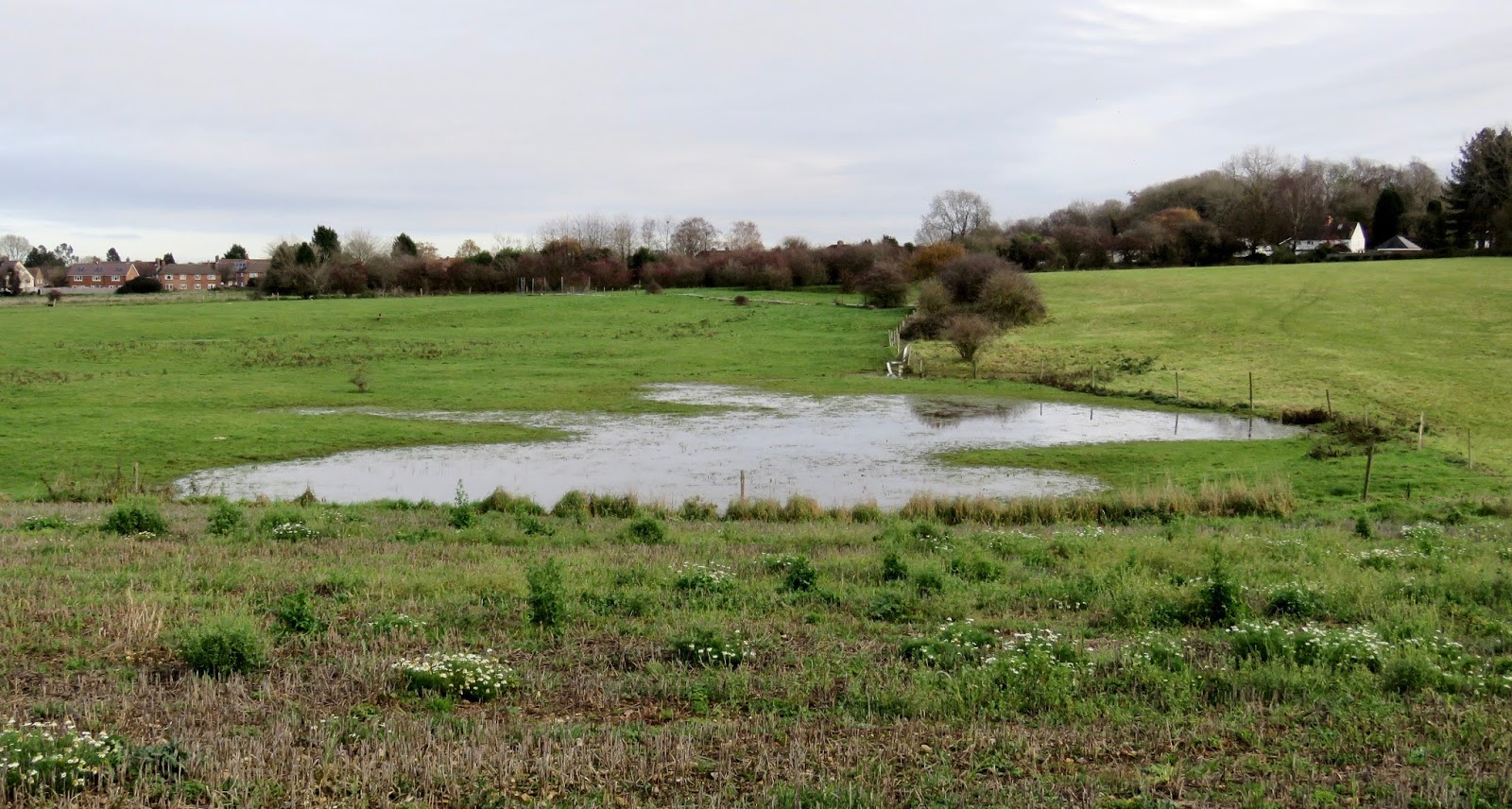 The first time that I knowingly took an interest in moths was during the evening of Saturday August 2nd 1975. I can be that precise as the day had been spent at Lords Cricket Ground, as a spectator watching 'our' boys take on the Aussies in the Ashes test. That Australian team were full of greats - Ian and Greg Chappell, Rod Marsh, Dennis Lillee and Geoff Thomson to name but five. On that particular day though the plaudits went to England batsman John Edrich, who completed a century. But I digress.

That evening I attended a family wedding reception in Tring, Hertfordshire. I had only been birding for a matter of months, and my interests in other aspects of natural history were in their infancy to say the least. But as darkness fell, something happened at the bare windows of the village hall that caught my attention. The black panes of glass were alive with fluttering forms attempting to get inside with us. They were moths.

Moving over to the window it was clear that these moths came in differing sizes, shapes and colours. I stood mesmerised as they came and went, each minute that passed revealing more wonders materialising out of the darkness. A small group of children had seen me looking, and came over, eager to get involved. They, too, were taken aback by the nocturnal show - we all wanted to see more. There then started an early form of citizen science, as we commandeered a number of small glasses from the bar, opened one of the windows, and started to trap the moths within the glass receptacles by using beer mats to usher them in. We couldn’t name them, but that didn’t matter - in fact I think it fair to say that none of us knew that moths had names, beside that of ‘moth’. Each capture was passed around, particularly if it had some sort of wow factor about it. The plain, the brown and the small were quickly released. There was one in particular that captured my imagination. It was fairly large and at first appeared to be dark brown all over, but when disturbed, or in flight, revealed an intense yellow underwing. It appeared to be quite common. After 30 minutes of hunting moths my attendant young gatherers had had enough and moved on to something else. I stayed by the window, ignoring the celebrations alongside me. Another world had been revealed.

The following week I got hold of a copy of the Observer’s Book of Moths. A there, on a plate, was my moth at the window. A Large Yellow Underwing. A species that I would get to see, sometimes in their hundreds, even thousands, over the coming years.

Released from an obligation

Confession time. After 46 years of sending my natural history records into various societies and organisations, I'm getting fed up with it. Bored. Cannot be arsed.

Sounds bad doesn't it? You would think that after playing the game for all of these years and doing the right thing that I would still be up for making sure that my valuable data would be sent to a safe place so that it can be added to the historical record and be used in years to come for research purposes or just entertainment value. I used to religiously send off my paper records to various recorders, and, when the records became computerised, started to visit BirdTrack to upload data, safe in the knowledge that it would get to the right person in good time.

But recently there has been a change. A change in me. I am moving further away from my time in the field being somehow all tied up with harvesting data. It's now more personal to me than that. It isn't about number, or identification for that matter, although it really is - confused? How do you think I feel?

My enjoyment in birding, or looking at plants, moths, butterflies or anything else living for that matter has not waned. It is as strong as ever. It's just that I'm going through a phase of not wanting to analyse it. My notebook still comes out with me but it might not get opened. The pen remains in my pocket. How many Redwings did I see this evening? I could give you a rough estimate, but I was watching the few swirling flocks coming into roost with a happy detachment - not of the birds, I was watching them intently - but a detachment from some perverse duty to record them. Last week I avidly counted the thrushes and submitted them to the notebook. Today? Nah, I just watched and was entranced. Took in the dying of the light. Listened to the Tawny Owl. Felt free. Released from an obligation that I took on board as a teenager back in 1974.

Will I come back to normality - whatever normality is? Why am I bothering committing these thoughts to this post? As I've written before, and will no doubt do so again in the future, blogging is a very cheap form of therapy...

Email ThisBlogThis!Share to TwitterShare to FacebookShare to Pinterest
Labels: recording

Something of the night

There is definitely 'something of the night' about me - not in a vampiric reference such as that famously made about Michael Howard by Ann Widdecombe a few years ago. As twilight starts to assert its authority over the daylight I do get a certain boost - sound and vision is heightened, smells and touch are turned up a notch. It isn't unlike the turning down of the house lights in a theatre or cinema, a prelude to something special.

This afternoon saw me walk up onto Epsom Downs, timing my journey so that, as I strolled down Chalk Lane - which for about a mile travels through horse paddocks and copses - I would reach the bottom of the hill in darkness. The paddocks are large and stretch back a fair way. I used to hear Little Owls here with some regularity, but they have gone from this side of the downs, to be replaced by those raucous buggers, Ring-necked Parakeets. Hardly seems a fair swap to me. This evening all that could be heard was a singing Song Thrush and a calling Robin, but these sounds came to me with a crystal clarity that is just missing during daylight hours. A few Carrion Crows were sitting, silhouetted, on the roof of a large barn, their outline's razor-sharp. The smell of leaf-mould, earth and the fruity mucking-out from the stables added fragrance to the cooling, but still mild, November air. Talk about being in the moment. When visibility is reduced, the senses come alive.

This time of day also acts as a reset button, what with the light having passed, and what has 'gone before' has done just that - gone. But I do not tend to look back, rather find myself being readied for tomorrow. The sense of anticipation comes to the fore, as if what had been dished up today was merely a prelude to what might be served tomorrow.

And another thing. I took this walk without my binoculars. Or camera. I found the whole thing restful, without expectation. No clutter. Just me and a jacket. No pressure. Of course, had a swift flown over in the gloom, or a wheatear jump out in front of me as I crossed the downs I would have been kicking myself for such foolhardy action.

Or would I have?