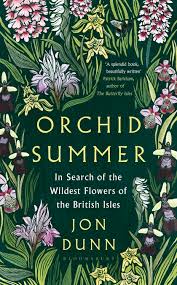 On Christmas Eve 2015 I received an email from Jon Dunn, naturalist, photographer, author and tour guide. We had, in the past, corresponded via our blogs, so could best be described as 'virtual friends'. He wrote to confide in me that he was planning to seek out all of the orchid species to be found across the British Isles during 2016 - had secured a publishing deal for the resulting book that he would write on completion of the project - and was hoping that I might be able to help him out with locating Surrey's Bird's-nest Orchid colonies. I couldn't offer my services fast enough!

On May 19th we finally met for the first time and, as hoped, hit it off immediately. I was able to show Jon some of the best that the county had to offer, and after a day spent on the chalk bade him farewell as he motored off to another orchid date in what would be a hectic summer for the man from Shetland. I wish I could have gone with him, but consoled myself with the thought that I would be able to read all about it when the book finally saw publication. This week an advance copy, through Jon's generosity, arrived in my hands. It was worth the wait...

This is no 'went there, saw that' account made in a strictly chronological order - to have been so would not only been generic but also turgid for the reader. What Jon has done is to use the premise of his quest to cleverly - seamlessly - weave into the story multiple rich threads dealing with the personalities involved in discovering orchids, naming them, protecting them and studying them; the orchid folklore, the rich history that they possess and their astonishing mechanisms for obtaining their food and their reproduction methods. There is no 'cut-and-paste' methodology going on here! He has also handed over extra time to the species that warrant our fuller attention, those that have a more 'interesting' tale to tell. This works wonderfully well.

This is a book that does not only entertain and inform, but, something rarely experienced, also inspires. Because you are there with the author as he kneels down before his quarry and experience with him his emotions (whether they be of success or failure) it makes you want to seek out your own audience with the orchids as soon as possible. As his quest evolves, so does his relationship with the orchids themselves. In places this is heart on the sleeve stuff, a natural history confessional.

Jon is a master of communicating factual information. In less skilful hands this can come across as dry, but he is able to irrigate and hydrate them into memorable passages of text. His brilliant descriptive prose appears throughout the book, with turns of phrase that, with a few skilfully chosen words, places you alongside him experiencing the plants and habitats first hand. If you thought you knew all there was to know about our orchids, then reading this book will make you realise that you didn't - and if you know very little about them then you couldn't find a better place to start to get to know them better. I will be looking at them with fresh eyes this coming summer and I am impatient to start. I yearn to seek out their variations; to really take in their structures; to try and observe some of their pollination methods at work - only a week ago none of these were even considered as things that I wanted - needed  - to do. For a start, the local Bee Orchids will be grilled in the hope for a var. chlorantha.

If you thought orchid hunting was all summer days and flowery meadows in the company of gentle souls think again! You will get drenched and cross swollen streams with him on Rum, get covered in mud in Herefordshire woodlands, be rounded on by irate golfers and menaced by beer-swilling Cumbrian red-necks. And, unusual for a natural history book, I found myself laughing out loud on several occasions - for plants that have been linked to testicles and libido for centuries a bit of 21st century bawdiness in not out of place!  References beyond the world of orchids are many and do nothing but add richness to the experience - and most of them land back firmly in the world of the orchid - Adolf Hitler is even referenced twice!

This is a book written, designed and published by people who care. From the charming 'arts and crafts' book jacket illustration to the font and paper choice; from the inclusion of a ribbon book mark to the aching desire from the author that we all embrace our wildlife and cherish it - this is a work of love. I cannot recommend it highly enough.