Showing posts from December, 2011
Show All

December 29, 2011
...I will not look at mosses ...I will not attempt liverworts ...I will not be snared into lichen temptation ...I will not forget that this natural history lark IS MEANT TO BE ENJOYABLE ...I will not forget to write things down and send in my records ...I will be more friendly to my fellow naturalist ...I will learn how to take proper images with my grown-up DSLR ...I will not suffer blogging envy ...I will visit Ranscombe Farm in Kent ...I will go back to the New Forest and have a pan-species blitz ...I will find a half-decent bird (it's about bloody time I did that again) ...I will, I promise, give micro moths a proper go ...and use my new plume moth guide ...and my big thick hoverfly book ...but not my mosses, liverworts and lichens guides Whatever you are aiming to do next year, may you be successful. Keep well, be happy and if you do manage to have moments of natural history pleasure, cherish them.
1 comment
Read more 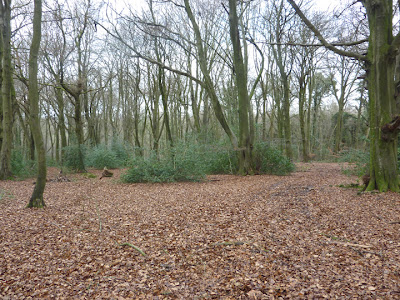 Today I visited Selborne in Hampshire. This is woodland at the top of the hangar, made famous by a naturalist clergyman, who, among other things, was the first person to use field skills to identify our commoner phylloscopus warblers. Here he watched and listened to Chiffchaffs, Willow Warblers and Wood Warblers.  This is the front of his house in the village. Today it was closed. Therefore I cannot tell you much about it. Try Google...  The parish church of St. Mary is where he had four spells as curate. He was buried here in 1793. This is a detail from a modern stained glass window in the church that depicts his life through natural history images and as a celebration of his world famous book 'The Natural History and Antiquities of Selborne'. In the churchyard is one of the 50 designated 'Great Trees of Britain' - or, more accurately, what is left of it after the 1990 storm - the famous Selborne Yew.
Post a Comment
Read more

December 27, 2011
If you have had the good fortune to have visited there, those two words - Taman Negara - will have shaken a multitude of thoughts and emotions awake within you. It is, quite simply, one of the best places on earth to experience birding in the rainforest. Slap bang in the middle of peninsular Malaysia, it is a vast reserve. I visited back in 1994. As part of a three-week birding holiday with two friends, we spent 10 days at Kuala Tahan, the reserve HQ, staying in a level of luxury that would be scoffed at by the likes of Rajah Brookes and Sir Rannulph Feinnes. To reach the HQ required a three-hour drive from Kuala Lumpur to then catch a boat that required a further two hours to speed its way along the river. There were a series of trails that snaked away from the HQ, and the bravest of birders could walk for days to reach the park interior (to see Crested Argus required such a trek with a guide). However, if trekking was not your cup of tea, then the birds came to you. There were many
Post a Comment
Read more 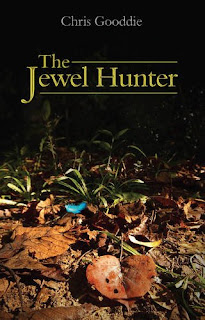 No, I haven't been spending Christmas in Asia and burning up those gems of the rainforest, the pittas. But a man that spent a year searching for every one of these beauties has enlivened my Christmas with his tales of the quest. 'The Jewel Hunter' by Chris Gooddie is a book that is as much a rare thing as the birds that it is partly about - a well-written account of the modern birder in action. Chris packed in a successful career whilst in his mid-forties to try and see every species of pitta in a calendar year. As someone who dreams of making similar grand plans (but never will) and who loves pittas (I have actually seen three species - Hooded, Banded, Blue-winged) and heard a further one (Mangrove), this book appeals to me on many levels. The writing style is one that accepts that most of the readers will be birders but never the less makes it accessible to those who are not. Part travel book, part social commentary, part natural history documentation, all intelligently
4 comments
Read more

George Osborne - seemingly not a friend of wildlife

December 18, 2011
A couple of days ago I posted a link to a comment piece that appeared on Birdguides which refered to the autumn statement that was given by the Chancellor, George Osborne. Now I am making anybody who reads this post aware of an RSPB call to arms to try and stop the harm that could come from the Chancellor's anti-habitat sentiments expressed in that statement. Please read and act by clicking here . I will try and keep my dignity and humility by not bad-mouthing this politician who obviously values his 'mates' business opportunities above the safeguarding of our natural habitats;  above the welfare of those species that are dependent on them; and above our enjoyment of them and of the future generations to come. After all, how much money can you milk an Adonis Blue, Turtle Dove or Marsh Helleborine for?
1 comment
Read more 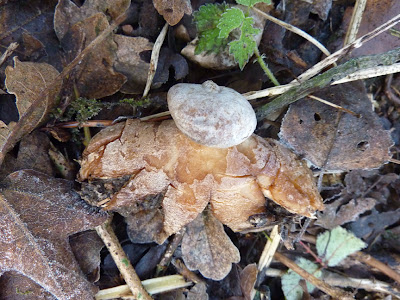 An alien being? Something from the Jetsons? I spent a wonderful morning tramping over one of my old patches - Holmethorpe Sand Pits. Apart from a wintery shower it remained clement. The birding wasn't too bad, with a good collection of wildfowl (including a Goldeneye), Water Rail, plus good feeding flocks of Stock Doves and finches on the farmland. But, highlight was without doubt the four Earthstars that local birder Graham James had alerted me to. These strange fungi are a family that I had been wanting to see these past few months and I was not disappointed. A stranger thing you'd be hard pushed to find. Geiger-esque. I reckon that they are Barometer Earthstars (Astraeus hygrometricus) and my photos match those on Roger Phillip's website pretty closely.
Post a Comment
Read more

December 16, 2011
This opinion piece is worth a read. The country is in safe hands...not.
1 comment
Read more 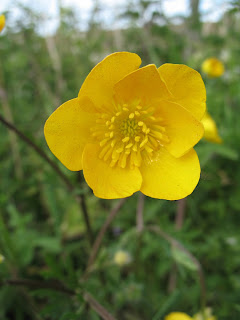 Cambridge University has revealed how buttercups are able to shine a yellow light under our chins when a flowerhead is placed close to it. It's great that some of these old childhood games involving plants are still being discussed. Do children still make daisy chains? Do boys pelt each other with burdock burrs? Do bindweed flowers still get popped, conkers still get smashed and do girls pick petals off of anything to hand reciting 'he loves me, he loves me not'?
3 comments
Read more 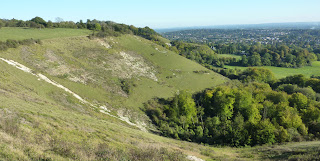 Colley Hill - part of 'North Downs and beyond' Birds: Most of my time was spent locally, with Beddington Sewage Farm the normal choice of destination. The year began with my seeing Waxwings in Redhill, Cheam and Canons Farm, the latter site providing a flock of 60+. Common Redpolls were in the company of many flocks of Lessers. An Eider on a sandpit near Buckland was a stunning local record. Spring came early - March, April and May were dry, sunny and warm. Canons Farm produced for me Ring Ouzel, Grasshopper Warbler and a singing Quail that I actually managed to see. Not to be outdone, Beddington came back with two Common Cranes that flew through, calling noisily, in mid-April. The fact that I couldn't see them was down  to the fact that a thousand gulls were circling above me at the time rather than my incompetence. A week at Sandwich Bay in June was like stepping back in time. The farmland there still is home to breeding Corn Buntings, Grey Partridges, Yellow Wagtails
Post a Comment
Read more

The faint tang of success

December 08, 2011
Seeing 'the bird' doesn't always guarantee joy, as I alluded to at the end of my last post. A poor view and nothing more can set all sorts of doubts of in your mind, such as 'was that enough to tick?' through to 'did I actually see the bird?' More than once I've come away from a twitch wrestling the problem of 'to tick or not to tick'. That scenario always ended the same - the knowledge that by asking the question in the first place really meant that the only response could be NO. Sometimes I've seen the bird really well and felt underwhelmed. Twice this has happened when seeing the rarest of the rare, a first for Britain.The Pallid Swift at Stodmarsh in May 1977 zipped around me within touching distance, but to my untrained eye I really did have to convince myself that the bird really was what the experts said it was. October 1978 saw me on St. Agnes looking at a Ringed Plover that I was being told was a Semipalmated Plover. I'd travel
Post a Comment
Read more

The agony and the ecstasy

December 06, 2011
I couldn't help but experience a half-forgotten chill run down my spine when I read this post on Devilbirder's blog. It is a tale of dipping, magnified by the rarity of the species that he had hoped to see, plus the distance that he had travelled to see it. Increased distance (with a cost and time factor) does not always make dipping worse - a local failure can be far more personal and painful. I started to think back to the days when I too picked up the twitching baton and ran with it. Were all my dips as painful? And come to that, were all of my successes pleasurable? 'No' and 'no' were my concluding answers to those questions. Painful dipping The bird that hurt me the most was a Great Spotted Cuckoo at Dungeness in the summer of 1989. I was in the grip of 'Dungeness fever' and liked nothing more than a Dungeness tick. At the time, this would have also been a UK lifer. The call came through to me soon after the bird had been found, and at the ver
2 comments
Read more 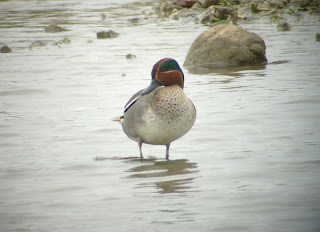 A cool morning was spent at Beddington Sewage Farm, the south-westerly breeze picking up and getting cooler as the hours ticked by. I stayed close to the hide, scanning both the north and south lakes without too much joy, 2 Shelduck, 18 Gadwall, 40 Shoveler, 150 Teal and 47 Lapwings being the pick. The morning was saved by a low-flying flock of redpolls, that alighted in a nearby Silver Birch. Scoping revealed a smart Common Redpoll amongst the Lessers. These birds were very flighty and after 20 minutes seemed to leave the area. Only myself and Steve Thomas saw the bird. This is not a regular species at Beddington. This autumn has seen a remarkable proportion of 'redpolls' being identified as Commons in Kent and Surrey, with ringing at Leith Hill providing record breaking numbers for the latter county. In the north part of Surrey we have struggled to find them even though most 'redpoll' flocks have been grilled (from such diverse sites as Holmethorpe, Canons Farm and He
Post a Comment
Read more
More posts