Showing posts from September, 2014
Show All

September 30, 2014
Dungeness August 1977 It’s been predominately cloudy and wet. My two-week stay has coincided with a period of easterly winds and this combination has lead to some of the largest falls of migrants that I have witnessed at Dungeness. I have spent many hours slogging around the nets when they are up, a task shared with at least six others currently residing at DBO who are also ringers. The maximum number of nets available have been erected and the total catch has increased proportionately. Fortunately there are plenty of birds to be shared around. Day after day the sallow bushes have been alive with birds, mostly warblers, predominantly Willows, with Pied Flycatchers and Redstarts to add spice to the proceedings. 7 different Icterine Warblers have been trapped and we all get to ring one, a most unusual state of affairs. We would normally be looking on enviously at the lucky individual who gets given such a rare bird to ring, but even those of us at the bottom of the pecking order are j
5 comments
Read more 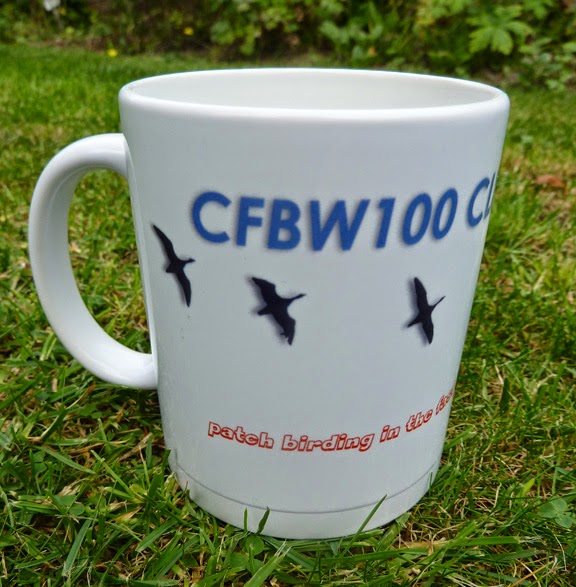 Quite literally... That merry band of Canons Farm and Banstead Woods patchworkers have a low-key competitive edge going on. The league table of 'species recorded' is one that generates a bit of good natured banter. To reach 100 species is no mean feat for this land-locked and dry site - in fact only five people have reached such dizzy heights. I currently stand on 102, (Raven being added today) some way behind the boy wonder David Campbell, who betrays the amount of time and effort that he has put into the site with a list of 125! Anyhow, he has had a number of commemorative mugs made to be presented to those birders lucky enough (foolish enough?) to become CFBW centurions. I was awarded mine at a simple and touching ceremony outside Canons Farmhouse this lunchtime (at the same time as two Hobbys were conducting aerial manoeuvres overhead). The catchline in red that you cannot quite read from the photograph says 'patch birding in the fast lane'. I might be tempted
4 comments
Read more

Of nets and rings

September 26, 2014
Dungeness Spring 1977 When bird observatories were being established around the coasts of Britain the main reason for their founding was to study bird migration. Collection of this information could have been carried out purely by observing which species, and in what numbers, were passing through an area at any given time. This was fine to a point, but to be able to identify exactly where these birds had come from and where they were going necessitated a different method of recording. These questions were to be answered, in the main, by the science of bird ringing. Simply put, bird ringing is carried out by trapping a bird and placing a metal ring on one of its legs. These rings have a unique serial number stamped on them, together with an address of where to send the ring if found. The trapping of the bird needs to be done carefully (to minimise stress) and the ring placed on the leg has to be light (as not to hinder flight and normal behaviour). To be able to participate in th
Post a Comment
Read more

September 25, 2014
There are times when the birding is just so easy, just so pure, that rarity and place are but irrelevances. This afternoon was such a time. I was at Canons Farm, the light overcast sky and modest NW breeze giving a decidedly autumnal feel to proceedings. I scanned the sky to the south and east and could see a few hirundines wheeling up high. A closer look revealed that there were more behind them - and above them - and as I carried on scanning more and more came into view. My first full sweep revealed at least 500 birds (mostly House Martins) and I followed this scattered flock as they circled above me, gradually heading SW. But as fast as birds left the area others were appearing. At one time there were over 1,000 hirundines on show, all lazily making their way across my field of view. I stood transfixed. I've seen larger numbers (a frankly incredulous 90,000 at Dungeness one September day) and I've seen birds zap through as if time was against them. But to watch a sky full
5 comments
Read more

September 25, 2014
Yesterday evening, only yards away from the Hammersmith Flyover, I was able to build up a tidy list of birds - some to be expected - such as Starling, Chaffinch, Blue Tit, Carrion Crow and Feral Rock Dove - with others a little more surprising - Nuthatch and Swallow - while some were down right unexpected - particularly the Whooper Swans, Great Egrets and Ring-billed Gulls. No, I wasn't stringing, but present at the Hammersmith Apollo to pray before the altar of Kate Bush on her 'Before the Dawn' tour. I won't give a full blown review here, suffice to say that it was a superb evening that will never be forgotten. She performed the second half of the album 'Aerial' in its entirety (with an additional track), known as 'A Sky of Honey'. This deals with the passing of an English summer's day, focusing on the song and flight of birds, the weather changes and the passage of light and time - all done in an affecting way as only Ms Bush can. Slow-mo footag
Post a Comment
Read more

HG Alexander plus the birding 'underclass'

September 24, 2014
Dungeness April 1976 When I began birding in 1974 I borrowed a copy of ’Seventy Years of Bird-watching’ by H G Alexander from the library. It became my birding template. He enthralled me with details of local patch watching, tales of the sudden excitement when rarities appear and above all the absorbing account of his many visits to a place called Dungeness that spanned seven decades. Now I’m here. I can look around me and actually visit the place where he found his Cream-coloured Courser in 1916 and where Jack Tart discovered a dead Bridled Tern during the 30’s. His Kentish Plovers and Stone Curlews may have gone but in my vivid imagination he is still here, wandering over the shingle, just out of view. The ghosts of previous birdwatchers (and their birds) haunt this shingle in a happy, benevolent way. Every gorse clump whispers of long-departed rare warblers, each fence post resonates with the spirit of the thousands of chats that have alighted upon it over the years. Y
3 comments
Read more 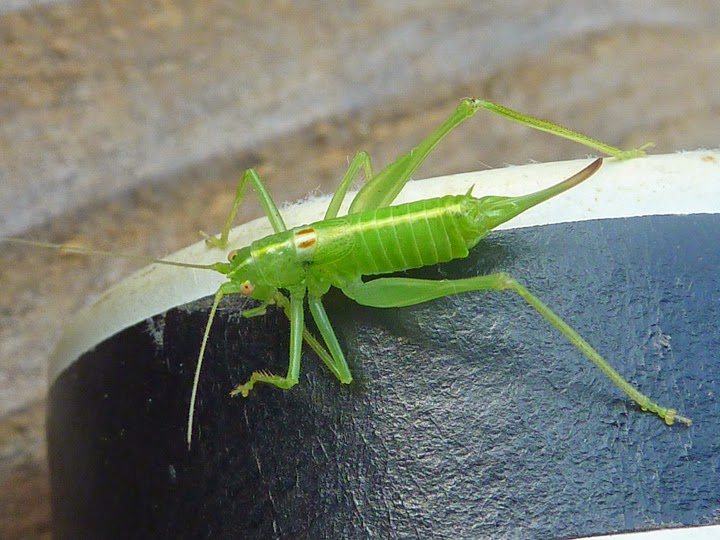 It was not until 2001 that this virtually wingless cricket was discovered in Britain (Thames Ditton, Surrey). Today it has expanded its range across parts of south-east England (including my own humble garden). This individual was found on the living room wall and capture was made all the easier as the little so-and-so couldn't fly away!
Post a Comment
Read more

September 22, 2014
More personal history waffle. There's a room-full of notes to mine for this stuff... Dungeness April 1976 We are being given a thorough grounding in observatory life and a whistle-stop tour of the varied habitat to be found in the vicinity of the peninsula. I am being left with a feeling of utter wonderment with what I am experiencing. Vivid images from the past few days are replaying in my mind: looking towards the lit power station at night as we go wader ringing at Lade Pits; watching a Long-eared Owl drifting silently past on a perfectly still, golden evening at the Oppen Pits; walking out to the far-flung Airport Pits, leaping ditches and flushing Grey Partridges. The daily routine of the observatory is seeping its way into me and the idea of what a ‘proper’ observatory day entails: getting out of bed before dawn; helping erect mist nets in the half-light; alternating between drinking tea, chatting and birding until lunch; sea-watching for a couple o
2 comments
Read more
More posts