Showing posts from April, 2012
Show All

April. How was it for you?

April 29, 2012
We bid April 2012 farewell tomorrow. It's been bloody wet, hasn't it... Birds: the weather saw to it that there were more than a few good species recorded locally. Inland patches need inclement weather to push down migrating waders and terns for us to see them. So, a procession of Whimberls, Barwits, Grey Plovers, Ringed Plovers et al helped to keep the spirits up because, if you were out looking for passerines, you were out of luck. Unless you count Ring Ouzels. They seemed to be popping up all over the place. I don't know why either... Moths: what's a moth? The MV remained indoors and my big year list push is moribund. Stupid idea in the first place. A whole month's inactivity means that I'm champing at the bit to switch on for the next decent night. Just in time for hawk-moths and prominents I reckon. Plants: sad to say, I've not done much looking. I know that stuff is out, because other blogs have said so, and have photographic evidence to prove
1 comment
Read more

April 28, 2012
Driving to Beddington Sewage Farm, I was listening to the Met Office weather report at 04.30hrs this morning. It 'promised' a fairly grey, but dry morning in the London area until a band of persistent rain early afternoon. My car windscreen told a conflicting story with the wipers working away dispersing the light drizzle settling upon it. So it came to pass that the BFBG Spring bird race took part in a cold, grey, heavy drizzle, with the odd spell of more annoying rain. This meant two things - firstly, it was good for waders, and secondly it made hard work of being out in the field winkling out passerines. We are lucky enough to have an open metal hide that overlooks the north lake, which manages to keep the worst of the weather from the huddled masses. There was a good turn out. At least 15 members were present, most of them for good lengths of time. A minimum of 82 species were recorded, highlights being an Iceland Gull; singles of Turnstone, Bar-tailed Godwit and Grey P
Post a Comment
Read more

April 27, 2012
Tomorrow sees the Beddington Farm Bird Group 'Big Day'. I will be going along, not only to enjoy the festivities, but to also head off the rumours that I'm joining Vicarman in the 'member least likely to be using his key' category. I reckon 75-80 species tomorrow - let's see how close I get. For a birder who doesn't take listing too seriously, I do like a bit of competition, so will arrive at the farm very early. If, by lunchtime, it is plainly obvious that I have no chance of being the day's big lister I can always throw the toys out of the pram and head home for an afternoon of Sky Sports News with Jeff Stelling.
1 comment
Read more

Getting in on it 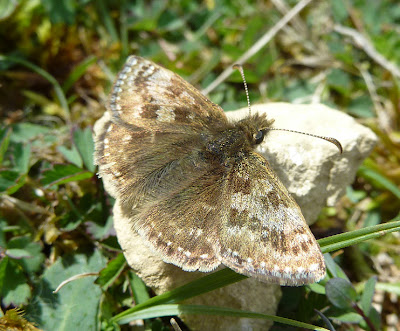 Locally it has been quite a productive week for birds - Beddington has had a Little Tern and Brent Goose; Holmethorpe a pair of Common Scoter and an Avocet; Canons Farm, not to be outdone, has played host to a male Pied Flycatcher. With a cool WSW wind, I ventured to the latter site this morning, but it was soon obvious that little was around. The Pied Flycatcher had moved on and with each scan of a hedgerow the use of the word 'migrant' became increasingly redundant. Then, at about 11.10, a familiar call came from up high, and there was a single silhoetted Whimbrel circling above me. This is a first for the farm. After a couple of minutes it drifted off north, but not before a couple of the local birders had also heard it. With a spell of sunshine I went onto Fames Rough, known primarily as a site for rare flora. The sheltered slope had at least 5 Dingy Skippers (below) and a single Grizzled Skipper on the wing, with a lone Small Heath nearby. When I returned in the lat
3 comments
Read more

Why Ouzels at Canons?

April 16, 2012
Last Friday a single Ring Ouzel was found at Canons Farm in Surrey. On Saturday morning it was joined by a second bird. Yesterday there were no fewer than four of them to be seen throughout the day. It is unlikely that all four had been present since Friday as the very open area had been birded heavily on all three days. I think it's likely that the additional birds were called down by the vocal nature of this species. I could hear a 'chack' from several hundred meters distance. How many others flew overhead and did not stop? Other well-birded local sites, such as Beddington and Holmethorpe do not regularly get Ring Ouzels. In the fledgling history of birding at Canons Farm it seems likely that a small spring passage may be the norm. There are other inland sites that seem to attract this species - Blow's Down in Bedfordshire springs to mind. If so, why? Fly lines? Magnetic fields? I'd love to know.
3 comments
Read more

The north wind will blow...

April 14, 2012
... and we will get Ring Ouzels. The rest of the country seems to be enjoying patronage from this rangy thrush, and not to be left out Canons Farm has had a male present for the past two days. I was on site just gone six this morning and it was bloody cold. I should have packed gloves. After an hours searching the Ring Ouzel popped up, chacking away from the top of a holly bush. An hour later it was joined by another, both staying put all morning. Close by were 5 Wheatears and flyby Yellow Wagtail (1) and Swallows (6).
Post a Comment
Read more

My first painting since 1980 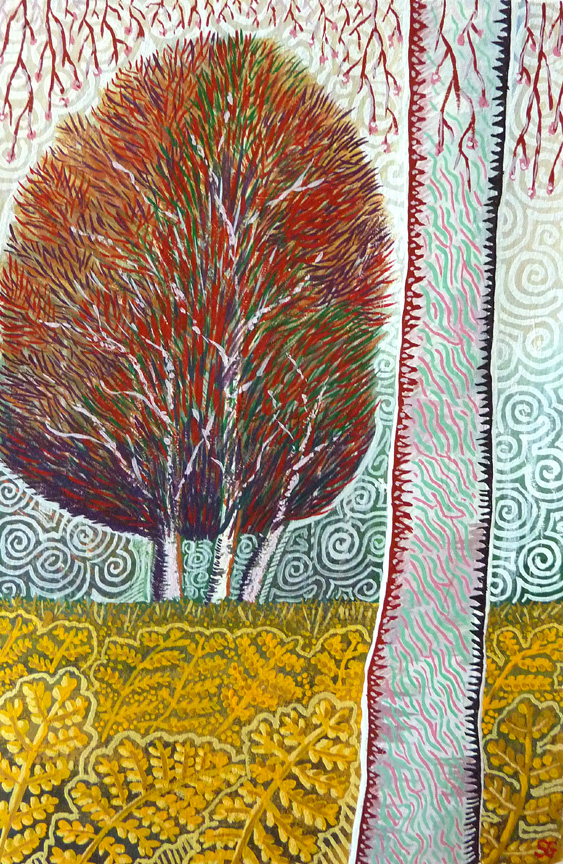 ﻿I left art college in 1980 having studied Graphic Design. I also stopped painting at the same time- that is until last weekend when, through encouragement from my family, in particular my youngest daughter Jessica, I picked up the paintbrushes once more. I have always admired artists who use graphic images and shapes within their work. Gustav Klimt is my main inspiration along with the all-round design skills of Charles Rennie Mackintosh. As for natural history illustration, give me Michael Warren anyday over many others. The painting above took me half a day and is based on Silver Birches and Bracken. I had no idea how a style would evolve and basically just painted away, adding layers until something took shape. As a first effort in 32 years I'm pleased enough to feel that it's worth my while to do some further work. I enjoyed doing it, which was another plus as I had been secretly dreading trying my luck after so long away from the easel. The medium is goua
9 comments
Read more

I am the walrus

April 10, 2012
Hello again! Haven't posted for, let me see, at least a week. I haven't seen much, not been anywhere in particular and to be honest had very little to blog about... until now. I was checking up on my linked blogs and came across Neil Randon's latest post . Oh dear - I recognise those symptoms. They are the signs of somebody getting mightily frustrated with his lot. I've been there (many times). I too have questioned why I do what I do. It is easy to get the hump. However, being in a Zen-like state of calm and finding myself floating at least three foot off the ground as I type this, I can give Neil (and any other sufferers) my humble observations. ONE They are only birds (or plants, or moths...) They are not on earth to represent your worthiness. TWO What you have seen (or are going to see) has no bearing on your worth as a human being. THREE If there are those out there who do judge you on the length of a list or birding prowess, then their judgement is ha
3 comments
Read more

April 02, 2012
At the annual North Downs and beyond outing to White Hart Lane (where we watched the mighty Spurs overcome a skillful Swansea City), the natural history radar was still switched on. I can now add Grey Wagtail and Brimstone butterfly to the Tottenham Hotspur football ground list. On the same day, back at Beddington Sewage Farm, the latest evolution of the ringing group was being unveiled. My early bird ringing training was under Ken Parsley and Mike Netherwood during the mid-1970s in the latter days of the then BSF ringing group. After Ken stopped ringing, Mike (and Mickey Cook) set up a ringing station within the storm tanks, where they practiced their art for close on thirty years. Now this scientific study has come back out onto the sewage farm proper, net rides have been cleared and a number of group members are training under Mike's watchful eye. Good luck to the relaunched group! Mike very kindly reminded me of some other bizarre bird lists I used to keep as a (strange) t
Post a Comment
Read more
More posts