Showing posts from August, 2011
Show All

What are you doing for the next 17 years?

August 27, 2011
So, 'scientists' reckon that the total number of species to be found on earth is likely to be close to 8.7 million. Whilst idly chatting to Steve Thomas at Beddington this morning, he speculated on how long it would take to see them all. Needless to say, that would be an impossible task. However, if you could be presented with each species, one at a time, for a thirty second peek (this taking place for a twelve hour period each day, seven days a week), it will take almost 17 years to see the lot - (1,440 per day, 525,600 per year). This is what birders do in idle moments...
Post a Comment
Read more 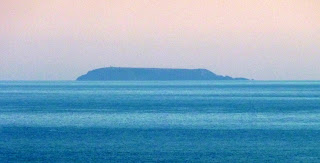 August 24, 2011
As a simple way of filling dead 'cyber space' and out of sheer personal indulgence, 1974 launches a series of 'years in the natural history life of one S W Gale'. I won't be surprised, or offended, if you stop reading right now and go off in search of something far more worthwhile. It all began during an art lesson at Sutton Grammar School, Surrey, in the spring of 1974. We had been given the subject of 'Conflict' to illustrate. Most of us were up to our elbows in poster paint trying to work up life-like images of warfare. However, a  fellow pupil's work had caught my eye as he had been far more original than the rest of us and was painting a garden scene of a cat pouncing at an improbably coloured bird that was flying just out of paw's reach. I asked him if the bird was a parrot. No, he replied, it was a Jay. He also told me that I could see one in my back garden if I kept a look out. Nonsense, I said, sheer bloody nonsense... Maybe two weeks l
1 comment
Read more

P*n-species update - for sad twats only Please take a moment and click on the picture above (I've saved it to a larger size to better appreciate it). I took it on a Cornish headland. If it were to be hung in a gallery of abstract art, it would not be out of place. Lichens... just don't ask me to identify them all!
Post a Comment
Read more

It's not only birders...

August 20, 2011
The following message was sent to the BBC Test Match Special after Ian Bell was dismissed for 235 at the Oval (England v India cricket test match for those of you that do not follow the thwack of leather on willow):  "Gutted. If Bell had got out on 238, it would have been the lowest score never previously scored in a Test." I had to laugh when I read that, as only cricket officianados can out compete birders when it comes to quoting trivia and the ability to be anally retentive...
Post a Comment
Read more 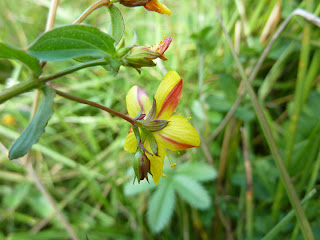 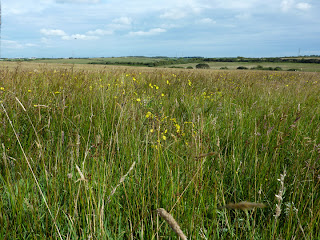 Culm grassland. Ever heard of it? No, neither had I until I visited this part of north Cornwall. It is a much reduced grassland/heath habitat owing to it being turned over for agricultural use. It has a specialised flora, including some species that are rare nationally or at least have restricted ranges. Yesterday afternoon, under a blue sky, I visited Greena Moor, a Plantlife reserve south of the vilage of Week St Mary. You will need precise directions to find it, although there is a sign on a roadside gateway to give you a clue as to the culm grassland's whereabouts. There are a couple of areas on the reserve that I found particularly rewarding - a sloping field with a stream running through it, the stream side being full of Marsh Ragwort, Water Mint, Greater Bird's-foot Trefoil, Wild Angelica and, star of the show, Wavy St.John's-wort. This latter species could also be found in good numbers closer to the reserve entrance, in a boggy field corner, along with another
Post a Comment
Read more 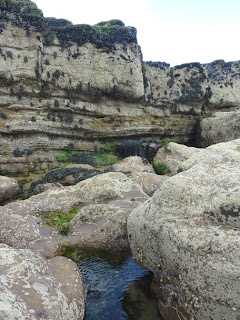 I have been reliving childhood summer holidays that were spent on Devon and Cornish beaches. Whereas I then brandished a bucket, spade and small green plastic net at the end of a bamboo cane, I now carry a digital camera and a field guide. As a middle-aged man, and in today's sensitive times, I felt a little awkward entering rock pools that were populated by toddlers, but was able to enlist my youngest daughter to accompany me on my quest for pan-species additions. The rock pools here at Bude are plentiful and seem to me to have plenty to offer the naturalist who's experience in such habitat has, up until now, been restricted to watching Turnstones. The picture above is of my favourite find of the day, the delightfully named Strawberry Anemone. No doubt if I'd risked drowning as the tide engulfed it, I could have watched the 'tentacles' emerge from the jelly-like body. Shortly afterwards, this Hummingbird Hawk-moth was seen nectaring on Red Valerian. It was a
Post a Comment
Read more 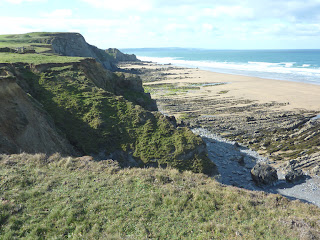 Well, I must admit to being surprised by the number of comments generated by my recent post regarding 'nature and faith' - or, in my case, the lack of faith. Thanks to the cerebral ping-pong between Mel and Peter, plus the odd call from the sidelines, it kept me informed, amused and a little aware of my own shortcomings. Not as a consequence of this, or of the riots, North Downs and beyond has decamped to the north Cornish coast. The view above is looking southwards towards the distant cliffs of Boscastle and Tintagel. To continue the 'faith' theme, I visited the famous museum of witchcraft at Boscastle - well worth a visit, regardless of your belief system. As for the wildlife, I have been rather laid back. The odd bird has caught my attention (Ravens, Peregrines, Little Egrets), botanically I have paid my respects to the local speciality (Wild Leek) and from a pan-species perspective have added a few denizens of the rock pool. My attempts to swell my moss and li
1 comment
Read more

August 05, 2011
Whenever I add a blog link to North Downs and Beyond I like to alert you to the fact, and give you the opportunity to view some fine work - so please take a look at Mel Lloyd's Sandy Wildlife . She is currently having a high-brow exchange with Beddington's very own Peter Alfrey in the comments area of my post directly below this one - and that's worth a read on its own!
Post a Comment
Read more

When an atheist gets a touch religious 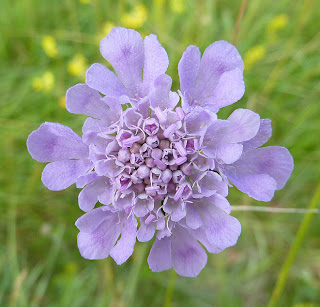 Click to appreciate the 'Grand Design' It's very hard being an atheist who appreciates the natural world. All around you are reminders of the intricacies of natural structure; the minute detail of pattern and colour; the myriad species that inhabit the world. Why is there such variation? Who's it all for? Now, those of a religious bent will sugggest that all of this variety is the work of God. Mathematicians will cite the construction of species as being the result of evolution into the most workable shape. Biologists will see patterning and colouring as needed for camouflage, display or warning purposes. I took the picture above on Banstead Downs. It is of Small Scabious. It is not uncommon, and something that I see on a regular basis. But when I actually took it in - actually looked at it as opposed to identifying it and dismissing it - I was quite taken aback. It is a precious thing. This has been crafted, with symmetry at its heart. The more I looked, the mo
20 comments
Read more 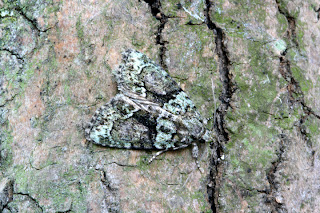 Tree-lichen Beauty trapped this morning - thank you very much! You can liken me to Nostradamus, or a bargain-basement Mystic Meg, but in my last post I suggested that this week would see me capture a Tree-lichen Beauty in the garden MV. This morning that is exactly what happened. It wasn't a totally unsurprising event, as this species has now established itself in the London area, but it was a lifer for me, following hot on the heels of June's back garden Rannoch Loopers. Apart from a couple of random Victorian records, the first modern British record was in 1991. Since then they have been recorded along the south coast as far as Devon and up the east coast into Norfolk. The colonisation of London has seen a small expansion into the northern home counties, but so far not the south. My next prediction? A Willowherb Hawk-moth or a Patton's Tiger please!
7 comments
Read more
More posts