There's an awful lot of people out there looking. Looking at birds, animals, plants, moths, butterflies, overturning logs to look at beetles, disturbing leaf-litter to look for fungi, checking trees for disease, ponds for amphibians, locating bats by detectors.

It just seems to me that big business, those who weald power, the monied and the agenda setters couldn't give a flying f about whether or not our butterfly populations are becoming fragmented to the point that they cannot sustain themselves. Or that our birds are still falling in number to the point that those of us who can remember The Banana Splits and Whizzer and Chips will also remember when our hedgerows and woodlands were rammed full of bird song.

An example - no two examples.

May 1974. I set up a microphone on my bedroom windowsill to record the evening chorus. The play back revealed such a level of bird song that it was impossible to distinguish individual songsters.

May 1985. Standing in Ham Street Woods at dawn. My birding friend and I were drowned out by bird song to the point that we couldn't hold a conversation with out shouting at each other. And even then it was difficult to hear each other. The noise from the birds was incredible.

If I repeated those experiences today the results would be very different.

What am I trying to say? I suppose an admission that I'm feeling a little impotent as to what use I currently have as far as making a difference. Maybe one of my aims next year should be to change that feeling...
at November 30, 2012 2 comments:

With only five weeks (ish) until the start of a new year, as is my custom, I have prepared the way by making plans for my natural history assault on 2013. I find it hard to start a year with no aims at all. I cannot contemplate just mooching about, visiting here and there just to see what's occuring. There is no form nor function in doing so (unless I stumble across a wintering mega, in which case all analysis is off).

My main thrust will be concentrated on my uber patch - that is all of my local patches which, when strung together, wiggle from Ranmore in the SW to Beddington in the NE - about a 15 mile wiggle. I have already collated my bird observations across this area (since 1974) and created my own personal and 'virtual' bird report, something that I love to update. Within this uber patch is found Beddington SF, Holmethorpe SP, and Canons Farm which, for an inland birder, offers plenty of scope.

What I want to do next year is compile a similar report for plants and lepidoptera. There are marvellous habitats on offer where some real highlights can be found and as much as these are the jewels in the crown of 'my' part of the north downs, I'm hoping that a bit of concerted effort in those areas not normally covered by naturalists might turn up the odd surprise.

Although not a listing exercise, I will keep a count of what I find, if only to encourage me to look critically at what I am seeing - it would be so easy to leave grasses, crucifers, pugs and micros (to name but a few) alone. I have prepared the way with checklists, my OS maps are at the ready, and I am all a-quiver to get going. I won't ignore other orders, but they will take a bit of a back seat.

Having said all that, I wouldn't be surprised if I find myself knee-deep in some other project by February...
at November 21, 2012 2 comments:

Lord of the Owls 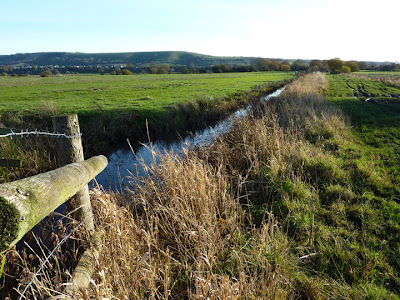 So, I've just taken the picture above (as I'm scanning for owls at Amberley Wild Brooks) and a woman, walking a couple of dogs, approaches me.

Woman: "What are you looking for?"

Woman (with much joy and incredulity on her face): "ELVES!!!"

When I explained to her that I was actually looking for owls she seemed terribly disappointed. She no doubt thought that the Lord of the Rings trilogy was, in fact, a documentary...

I managed to see two Barn Elves but unfortunately no Short-eared Elves. Maybe they are still quartering the open ground at Hobbiton.
at November 18, 2012 6 comments:

Email ThisBlogThis!Share to TwitterShare to FacebookShare to Pinterest
Labels: owls 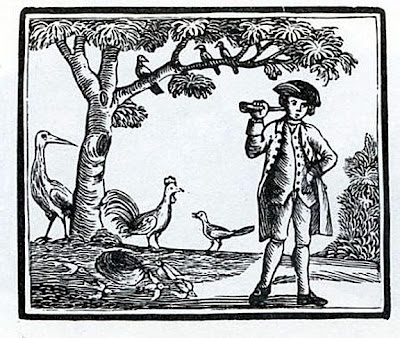 ﻿I have settled on my 2013 'Natural History' project and am already looking forward to it with great excitement. I am going to take that ultimate birding vicar, Gilbert White, as my role model, and immerse myself in studying the natural history of the hills and fields of north Surrey. There are a few rules that I am going to impose on myself however:

At all times I will wear a dog-collar and tri-cornered hat, breeches and buckled shoes.

I will shoot anything that I cannot identify, or if I come across a flock.

I will travel everywhere on horseback and stay in an inn each evening.

I will refer to all birds in their original state - such as Wood-Wren, Fern Owl, Bramblefinch - and if I come across such species as Water Pipit, Caspian Gull and Willow Tit refuse to recognise the modern interlopers.

I will employ a man to climb the dizzy heights of such peaks as Box Hill to collect alpine specimens for me.

I will correspond only by post and let interested parties know of my finds three weeks after they have gone.

I will start an egg collection and hold informal evenings showing off my exhibits to like-minded fellows.

I will collect butterfly abberations, sell limed finches to ruffians in the marketplacess and produce lavishly illustrated books with names such as 'Ornithological procrastinations from the woods and dales of northern Surrey' and 'Lepidopterum introspectum Britannica'.
at November 14, 2012 4 comments:

This post was prompted by David Campbell, who was birding at Canons Farm last Sunday with the chickenpox...

I once had a blocked tear-duct. It was quite messy, without getting into too much detail. And then I had a temperature to go with it, a thumping head, a general feeling of malaise plus aching limbs. So I did what all sensible people would do and got into my car and drove 90 miles to Dungeness. The rush of pre-birding anticipation got me through the journey but as soon as I pulled up outside of the observatory I felt terrible. So I immediately turned round and started to drive back home.

It was a long journey. My eye started to weep pus and blood (told you it was messy). My headache started to seize up any ability to think straight. Pulses of pain travelled down my arms and legs. I felt very hot. Then very cold. Then very hot again. The speedometer rarely went above 40. It took an age to get home and when I did I crawled into bed and into a fitful sleep.

I had a call from the observatory at the end of the day to tell me that they had watched a male Red-footed Falcon arrive in off the sea. I was too ill to let it bother me.

It is a universal truth that birders will put up with almost anything to go birding. I've seen people with broken limbs try and cross shingle on crutches to scope a flock of gulls. I've walked through a winter woodland in pouring rain to count tit flocks whilst undergoing chemotherapy. And on more than one occasion, whilst sea-watching, I've woken up terribly hung-over collegues to inform them that something half-decent is coming our way. They would sooner choose to overcome alcohol poisoning on a cold beach than a warm bed 'just in case' they missed something.

I've not been posting as much recently. And neither have many of my favourite bloggers. Subject matter seems to have stagnated. I cannot motivate myself to drum up new angles or think of subjects to entice the visitor to get involved with. My stats (not that they are the be-all and end-all) have dropped. Comments are rare. Something's gone wrong.

I have recently started to tweet which gets a short observation or idea out there quickly. It does not take the place of a post as it is relying on 'followers' as an audience (and if we are being honest it's an audience that we all want). Maybe these tweets have taken the steam out of my posting.

I have deleted this blog once before, something that I regretted doing. I won't make that mistake again. I need to rethink what it is that I want this blog to do. It's never been my intention to just list my observations but there again it's rather presumptious to assume that my meandering thoughts or slightly wonky take on what we do is - in any way, shape or form - worthy.

So, I will continue to post if I feel the need. I would hope to have something 'new' in place by the new year which will scatch my natural history itch in a more satisfying way and maybe act as a service to those of you who have a real passion (hate that word) for our natural world but maybe want a slightly different take on it. There again, I could always get a life...

Email ThisBlogThis!Share to TwitterShare to FacebookShare to Pinterest
Labels: angst 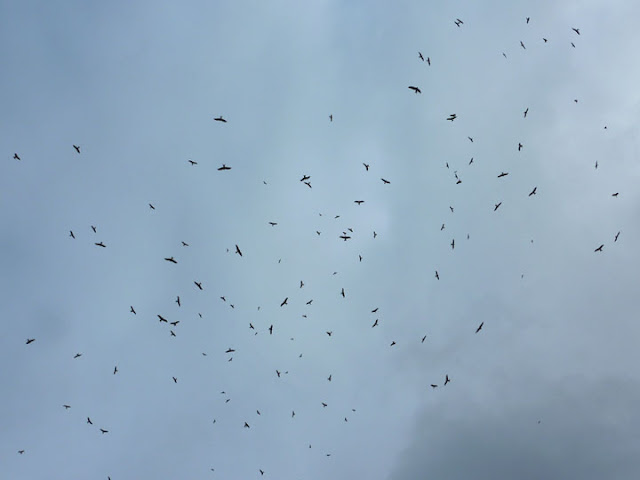 350 Red Kites in the air together, in one loose flock, is one hell of a sight. I didn't really want to go along to Gilgrin Farm, a feeding station for the kites at Rhayader in Powys. To me, it smacked of being a zoo, but my wife in particular wanted to go along. I am so glad that we did. Driving northbound along the picturesque A470 (is there a more stunning A-road in the UK?) I started to count the kites once we left Builth Wells. As we approached Rhayader I was staggered to see that the swirling mass of birds gathering over the lower slopes of the eastern hills were all Red Kites - maybe 40 in total. As we parked at the farm there were kites everywhere, 360 degrees of action. They were approaching from all directions of the compass, gathering to take the meat that was due to be put out for them by the farmer. I quickly estimated 150 birds, then recounted, 180. Another scan revealed more streaming in, 200+. magical.

There are hides provided for the close inspection of the birds taking the food, but after a few minutes of sitting in one, full of camera-toting tourists, I left, heading for the hill slope. I wanted to experience these birds in the open and without the constant whirr of camera motors. My wife and daughter Jessica joined me. For the next couple of hours these birds flooded into the valley, the image above showing at least 150 birds. Many swooped low over our heads as we hid in a light strip of woodland, the high mewing of the calling birds a constant presence.

These birds are apparently the truly wild descendents of the Welsh breeding population - I saw my first in March 1978 at Tregaron Bog, not far as the kite flies from where I was standing. As the light started to fade the numbers dwindled, small packs of them heading off, in all directions, to distant roosts. At least 350 birds were on show. If you get the chance, I urge you to visit. More information can be found here.
at November 03, 2012 No comments: