Moth-mugged by a Robin and a Box Bug

One of the Oak Beauties was, as the name suggests, a beauty, so I couldn't pass up the chance to get a decent photograph of it. I placed the moth on the trunk of a tree and waited for it to settle. As I was doing so, I felt something land on my head. I was then was aware of something hovering an inch in front of my nose. And finally registered the Robin as it picked off the Oak Beauty and landed on the lawn not ten feet away where it proceeded to have a late breakfast.

If I ever catch a scarce moth in the garden I take my pictures in an enclosed porch, mainly to insure against them flying off into the distance. I will now do so to stop Robins from mugging me. 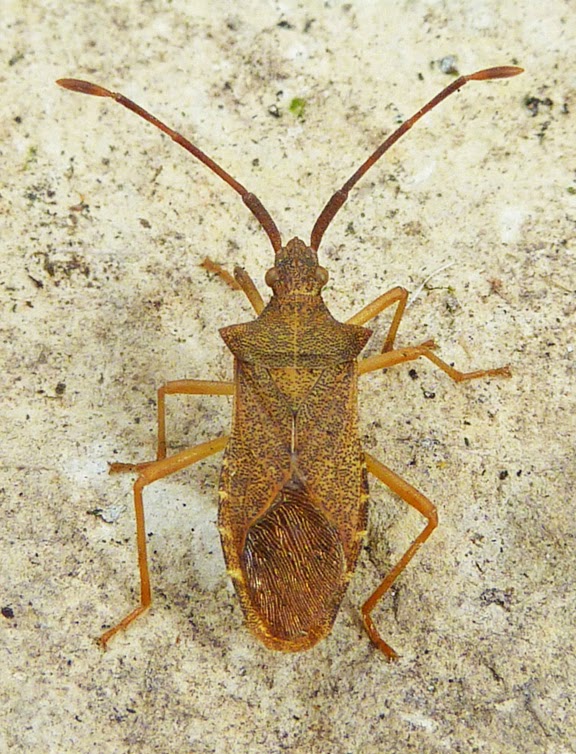 Shortly after that little episode, I was pleased to find this Box Bug on the garage wall, a species that has broken away from its former range of 'Box Hill' and is coming to a garden near you soon (if it hasn't already). This was my first.
at March 30, 2014 No comments: 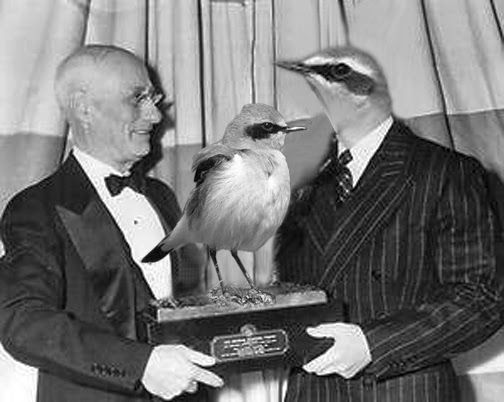 The North Downs and beyond Wheatear Trophy is up there in kudos with an Academy Award Oscar or the Nobel Peace Prize. Grown men have been known to cheat, steal and commit acts of violence to try and get their hands on it. The rules are simple  - which blog has unashamedly posted gratuitous images of Wheatears as the delightful little white-arses arrive on our shores. But there can only be one winner...

This morning, at a lavish ceremony held at the Dungeness lifeboat station, last years winner (Gavin Haig), presented the trophy to Martin, who, as you can see from the photograph above, came dressed-up as his favourite species of bird. Two other blogs are worthy of mention in this years competition - Plover's Blog (Barney and the Bedford Plover) and Wanstead Birder (Jono Lethbridge) - both are to be commended on plastering their blogs with plenty of Wheatear action. They were beaten by a more driven (and some might say more 'desperate' man). So, the Wheatear flame has been passed from Devon to Kent. Can Essex wrest it from Kent's hold in 2015? And does anyone care?
at March 28, 2014 12 comments:

Email ThisBlogThis!Share to TwitterShare to FacebookShare to Pinterest
Labels: Wheatear

It was twenty years ago today...

If you were to be asked what you were doing twenty years ago to this very day, most of you wouldn't have a bloody clue. I, on the other hand, not only have a photographic memory (although this ceases to work beyond 1994) but also field notebooks that go back into those glorious days of the slightly grubby 1970s. So, what was I doing on March 27th 1994. Here's a clue: A bit of detective work is needed to identify where, in the world, I was. The dendrologists among you will no doubt have clocked the Dipterocarpaceae and may even be able to point out individual meranti, chengal and keruing trees. Others will look at the forest floor and at once place the rich reddish-brown soil and creeping tree roots as indicative of south-east Asia. And you'd be correct. This is a forest trail at Taman Negara in Malaysia... if you listen carefully, you might just be able to hear the Banded Pitta calling off to the right. 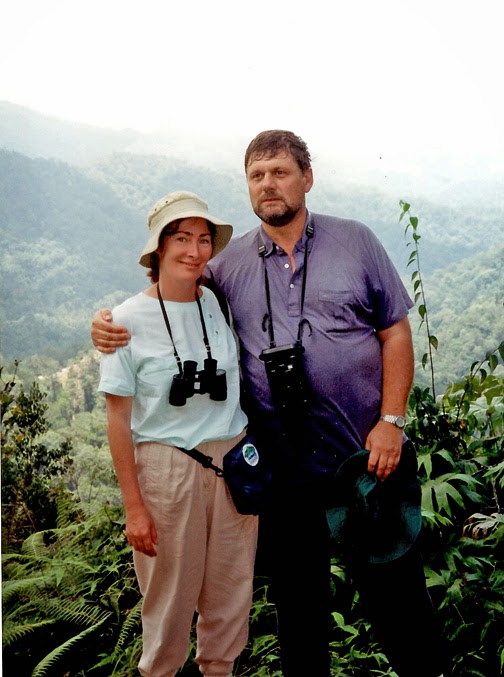 And here are my fellow birders of twenty years ago - Janice and Mark Hollingworth. We spent three weeks in Peninsular Malaysia, dividing our time between Taman Negara, Kuala Selangor and Fraser's Hill. Each site had its own suite of birds and in our twenty days birding saw at least 280 species without really trying too hard. There were many highlights, including Banded, Hooded and Blue-winged Pittas (plus Mangrove Pitta heard), Masked Finfoot, Great Argus, Bathawk, Cutia, Brown Bullfinch, Blue Nuthatch and the two Malaysian endemics - Malaysian Whistling Thrush and Mountain Peacock Pheasant (a rare double for birders staying but a short while). 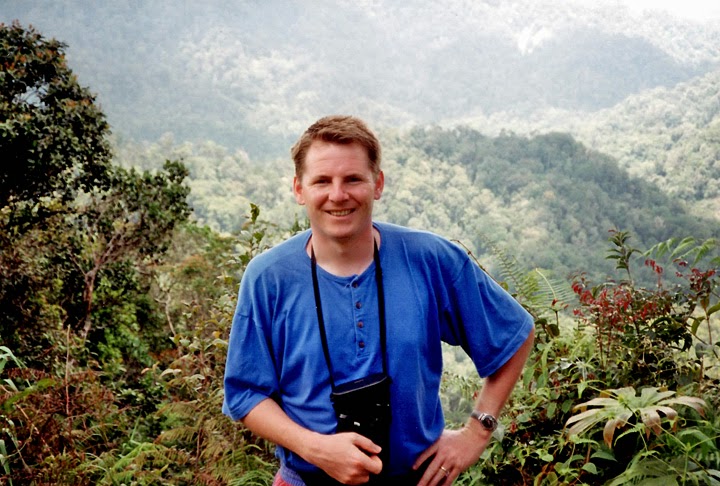 And here I am. I haven't aged a bit, have I ......... Both of the photographs above were taken at High Pines at Fraser's Hill. But, being a slave to accuracy, twenty years ago today we were stalking the trails of Taman Negara, and thankfully I wrote a very full account of the trip on our return, so can share with you one of the highlights from that very day. It was the moment that Janice finally caught up with the spectacular Great Argus on the slopes of the Jenut Muda trail.

"This time there could be no mistakes - we both sprinted up the slope towards the calling bird, hearts beating, making sure J was always ahead so that she could clearly see the Argus. At the top we were greeted by a male in all its finery. Standing off the path to our left, on our appearance it slowly walked across the track in front of us, as if an exotic float in a carnival procession. Magestic. It took its time to do so, giving us ample opportunity to feast our eyes on this almost ghostly presence - it made not a sound as it moved. My previous impressions of this species were justified, as once again I was awestruck. Our private showing ended as the long tail edged off the path and back into the vegetation. The bird had been so large that at no time had the whole of it been in view."

That may well have been twenty years ago, but I still get goosebumps thinking about that Argus. If you don't know what they look like, seek an image out. As big as a Peacock. Just much, much, shyer.
at March 27, 2014 No comments:

To kill or not to kill? The Facebook group response

Should you kill to tick?


A museum glass cabinet that displays stuffed birds is an object that at once shows its age. When the naturalists of the 18th and 19th centuries went out to catalogue the natural world, they went armed with guns, cat gut and sawdust. The provenance of a bird was down to the production of its skin - the old saying of 'what's hit is history, what's missed is mystery' was very true indeed - if you didn't have the body then the record was unproven.

There cannot be many people who would not baulk at the idea of netting birds, wringing their necks and then displaying them at home, stuffed and wired to a perch within a case. But what about butterflies? Moths? Beetles?

I have recently had an email correspondence on the rights and wrongs of collecting with two fellow naturalists. I think it fair to say that one is pro and one against. I find myself sitting somewhere in the middle. It got me thinking about the subject, which has not done anything to push me off the fence.

In the UK we can safely assume that, bar rare scientific study, nobody collects birds in this day and age.   In botanical circles plant material is commonly collected for identification purposes, but this does not need the whole plant to be dug up, rather the taking of a seed head, a leaf or the cutting of a stem. Lepidopterists are largely shunning the practice of collecting a specimen to pin it to a board, largely due to very good field guides being available plus the rise in compact digital cameras with which to obtain great images. However, some of the 'old school' still retain voucher specimens. Many invertebrates are unidentifiable unless you examine them closely. This often needs the insect in question to be sedated or killed.

So, is it alright to kill a living creature? Does it make it OK to do so if you are undertaking a survey? Is it permissible if you are furthering our knowledge of the species (or related species)? But the question from our correspondence that hit home with me was:

Is it OK to collect a specimen and kill it to purely gain a tick on you life list?

Hmmm... good question. I find the collecting of butterflies and moths archaic and needless, although there are many micros (and a few macros) that need genitalia examination to be carried out to be able to positively identify them. They therefore need to be killed (in most cases). Should we leave these alone, leave them unidentified, and only let the professionals undertaking research to kill them if need be? And why do I not baulk at the collecting of beetles, flies, wasps etc? Is it because they are not so cute and colourful? A few are. Or is it because, from small children, we have watched our elders chase after them with sprays and swats and exterminate them with extreme prejudice as soon as they entered the house?

There are contradictions. I won't collect moths but know that by switching the moth trap on a very small number of them will get damaged in the process. And if I don't get to the trap early on, then the local birds will come down and have a free feast on those moths resting on nearby walls.

The previous generations of naturalist were collectors. They were eggers. They carried out taxidermy. Today we are largely not. But when you explore nature in all of its many guises, there are some areas that are still at the 'textbook and collection' stage. To not collect would mean to not further our knowledge of them. Killing here is simply what is needed to be done.

My current outlook is this. If I need to kill a creature to identify it, I don't. This means that there is plenty out there that I will not be able to identify. That's fine. I struggle enough with what I can identify without killing it as it is!
at March 25, 2014 3 comments: