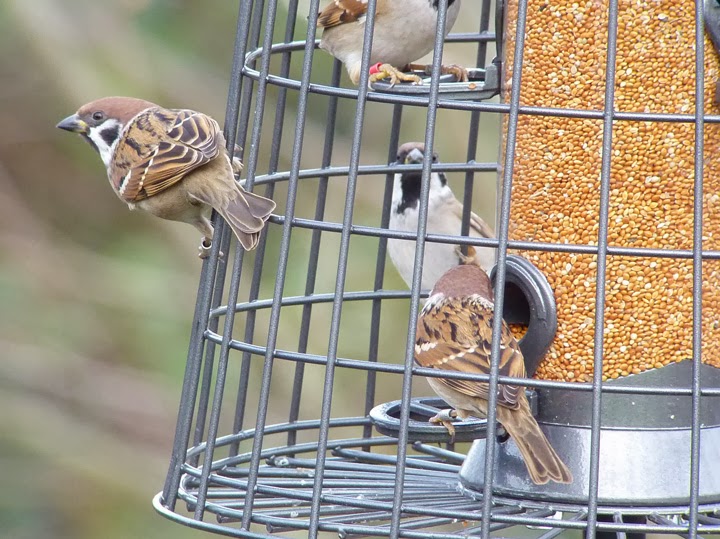 There are few birds that have a better claim to be regarded as the iconic species of Beddington Farmlands (Sewage Farm) than the Tree Sparrow. It appears in the Beddington Farm Bird Group logo. It is the first place that any Surrey or London-based birder considers when planning on seeing one. And now, in early March 2014, and probably for the first time in living memory, you will not find a single Tree Sparrow at Beddington...

Beddington's ornithological record is an enviable one and one of the longest in the world. Records exist from the late 19th century and regular recording started in the early 1930s. From this we can build an historic picture of the Tree Sparrow at Beddington.

On a national scale, the cyclical nature of this species population level is shown, with peaks at the end of the 19th century and the 1960s and corresponding troughs in the 1930s and 1980s. This is mirrored to some extent at Beddington. As a breeding species it was at a low-level until the 1950s, when, in 1951, 44 pairs were found, which had built to 78 pairs four years later. Surveys carried out in 1961 and 1962 both returned 70 pairs. Up until the early 1990s the population fell, with between 15-27 pairs found in the intervening years. This fall, at a local level at least, was attributed to the loss of nest sites - a preference for holes in the concrete dykes (that had been infilled) and holes in elm (which had been lost to Dutch Elm disease).

In 1992, under the auspices of the Surrey Bird Club, over 100 nest boxes were erected on site to encourage Tree Sparrows to prosper. This initiative was a success, with 28 boxes used in the first year and 55 in the following year. By 2006, and with extra boxes in place, 118 boxes were utilised, with 959 birds hatched from 262 broods. (A full account of this project can be found in 'The Birds of Beddington Farmlands' by Alfrey, Milne and Coleman).

However, all was not well. In later years this population was given a helping hand with supplementary feeding. On site, the abundance of ruderal vegetation that produced copious amounts of small seed had started to reduce. This was mainly due to the removal of sludge lagoons and the creation of the landfill site. As the availability of seed reduced, so did the Tree Sparrow numbers. In the past couple of years the breeding population has slumped, as too has the wintering population. The days of three figure flocks may be a thing of the past.

On a personal level I find this upsetting. My early birding memories are heavily influenced by my time spent at Beddington, in the company of Tree Sparrows. The reason for the decline is simply man-made. It is not as though the BFBG has not warned the 'managers' of the site of this impending doom. They simply seem not to care.

What of the future? Well, Peter Alfrey, with his inexhaustible reservoir of optimism, is involved in a rescue plan that you can read about here. I hope it isn't too late...
Beddington Sewage Farm Tree Sparrow

Stewart said…
Very interesting, and sad Steve. Tree Spug is my garden iconic bird too (!). When we came in 2009 we had 4 visit during the winter. I stuck up a few boxes and feed seed all year round and now have up to 30 all year and maybe 4 or 5 pairs breed. If I had the time and gear I would knock up more boxes for them, but at least my little colony seems stable enough...
4 March 2014 at 19:25

Paul Trodd said…
That is tragic, but sadly not surprising. Down here on the Marsh the three `main` colonies (Boulderwall, Midley and St Mary-in-the-Marsh), which in total concerns probably no more than 50 pairs tops, are just about holding up, but only because of year round artificial feeding and a good supply of nest boxes. Hereabouts, I`ve noticed small colonies that have gone extinct within the last five years. It really is a tragedy that this dapper little sparrow has one foot on a gravestone and the other on a bar of soap, so`s to speak. Grey Partridge, Turtle Dove and Corn Bunting aren`t far behind either, closely followed by Lapwing, Barn Owl and Yellowhammer. The future is not bright for most of our farmland birds, and I can`t see any change in the near future as farmers come under more pressure to feed an over populated human world. Heavy stuff...
4 March 2014 at 19:53

Steve Gale said…
Thanks Stewart and Paul. The other problem we have here is that there isn't another Tree Sparrow colony nearby to recruit from. When the Beddington population goes (which it may already have), that really is it. Very, very, sad.
4 March 2014 at 20:57