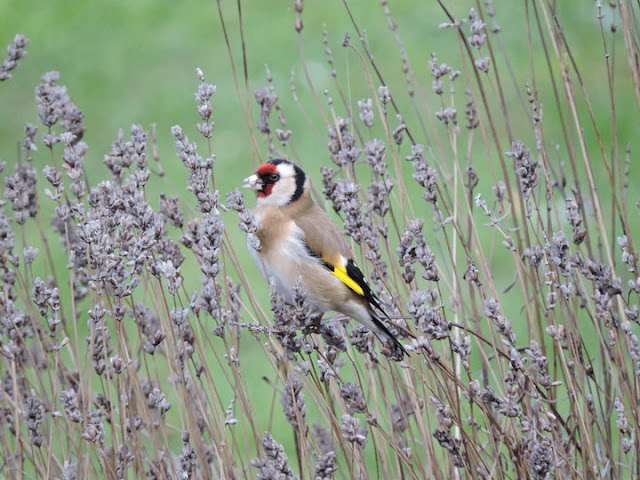 We have three medium-sized Lavender bushes in our back garden. Throughout the summer the flowers (which last for several months) are a magnet for insects and give off a most restful aroma. As tempting as it is to cut the dead stems in the autumn, we always leave them, as we know that during the late winter we will get visitors to feed on the seed heads...

This video was taken from the kitchen window this morning. We will normally see one or two birds over a few days, but have had up to 14 at once. We never tire of watching them. Lavender is a wonderful plant to have in the garden, with year round natural history benefits. So what are you waiting for? They are readily available at a garden centre close to you right now!

There is an historic association with Lavender in this part of northern Surrey and south London. Lavender fields have been harvested for many years, with one particular field close to Woodmansterne being very popular with day trippers. A significant proportion of them are Korean (many have settled in SW London). I once asked a couple, who were wandering through the crop, why they were enticed to the site. They told me that it was because lavender has a strong association with love in their culture. Even to us westerners, this species has many links to folklore, it is said to act as a protector, to lessen pain and to aid sleep. A recent boom in the manufacture of lavender products is testament to its reawakening in the early 21st century. And our wildlife loves it.

STOP PRESS: A Wheatear was reported on Monday from Tarrant Rushton Airfield in Dorset. Fresh migrant or wintering malingerer? Whatever its provenance, let the white arse season commence!!
Goldfinch Lavender

Derek Faulkner said…
I adore Lavender and have always grown it in my gardens, mainly because I love to see the bees using it in large numbers.
I also spray the oil on my pillows if I get a bit stressed out and also rub it in to aching muscles. All in all it's a great plant that should be in every garden.
19 February 2016 at 10:01

Edward Brown said…
I know your expertise on this. I must say we should have an online discussion on this. Writing only comments will close the discussion straight away! And will restrict the benefits from this information. Lavender Essential Oil