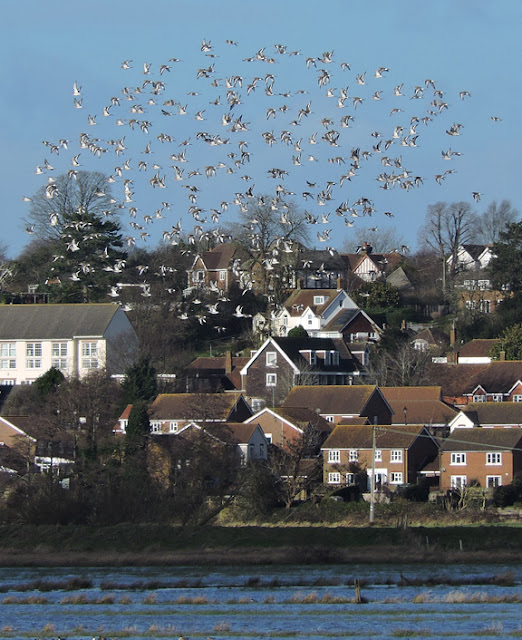 For the third time in a little over a fortnight I found myself at Pulborough Brooks*, unable to stay away from another helping of Black-tailed Godwits. Numbers today were a little down on last week, but there were still 800+ present, and they put on a spectacular show. There seems to be three default settings for the Pulborough godwits:

2) Feed. All at the same time, eager and animated, much calling.

3) Fly! Turn from grey/buff humdrum into zebra-striped humbugs with a flick of the wing and a turn of the body, in glorious synchronicity.

Today saw quite a lot of aerial activity, as a particularly stubborn Peregrine was hassling birds over the flood throughout the day. I didn't see it, but there is now one less godwit on site tonight, but also one satiated falcon! When spooked, the flock, (which had been feeding or roosting in close proximity), would split into three or four sections, wheel around for several minutes, and then join up again, at other times break up and scatter into the distance, moving as far as the edge of Pulborough village or even leave the north flood altogether. There came a point when the flocks appeared to, just for the sheer joy of it, engage in extravagant manoeuvres - aerial ballet. A comparison with the murmuration of Starlings is not that far-fetched. When they felt safe, or got fed up, they would finally settle.

*There is no truth in the rumour that I have forsaken a certain shingle peninsula in Kent for this Sussex floodplain. Normal service will be resumed in the not too distant future...
at February 02, 2016

What's wrong with that darker looking one with the blackish underwings..?

I guess when you see sights like that your patch can seem a tad bland at times. I spent yesterday morning being entranced by the beautiful sounds of 280 Whitefronts mere yards in front of me.

I don't expect that you get many in your neck of the woods Simon.

Derek, you are correct! I need to have a different mindset when birding locally and severely lower my expectations.

*I think I may have been to said shingle beach more times than you so far this year!

Neil, you are showing me up on that score!