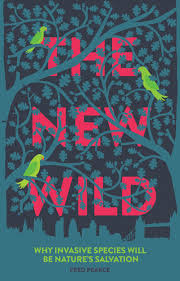 We are surrounded by species that, by rights, shouldn't be there - Japanese Knotweed, Pheasants, Little Owls, Horse Chestnuts, Rhododendron, Mink, Grey Squirrels... I could carry on. The knee-jerk reaction is to dig them all up, shoot them, remove them. We also spend a lot of time and money trying to keep certain habitats intact, be they reed beds, heathlands or salt marshes. It is as if we are trying to freeze time so as to preserve the fauna and flora present. Old, established ecosystems are the only way forward, and control of species that turn-up uninvited (or outstay their welcome) is obviously to be desired. Right? Well, according to Fred Pearce, wrong - very wrong!

This book will have you questioning the way that you look at the world and examining a number of pre-conceptions that will have been with you for many years. The idea of a settled way of the world - an idealistic view of ecosystems and habitat - is shown up to be a folly. That there are places in the world that do not show the scars of man's hand is debunked. Even the (apparently) ancient Amazon rain forest is not what it seems.

The deliberate, or accidental release of a number of species are looked at in some depth - among them being the Chinese Mitten Crab, Water Hyacinth and Mnemiopsis leidyi (a jellyfish) - and all have similar tales to tell. They arrived as unwanted aliens, took over, became public enemy number one, then retreated unexpectedly. In some cases millions of dollars/pounds had been spent trying to eradicate them before the species regulated themselves. In the case of Water Hyacinth, it was released into polluted lakes that had already lost a great deal of its suitability for many species. However, the Hyacinth was tolerant of such conditions and thrived. This was seen at the time as outcompeting what was already disappearing there. The plant was quietly cleaning the water, taking in the bad waters and purifying them. As the waters got cleaner, other species returned. The Hyacinth wasn't as keen on the cleaner water, and now had competition, so it greatly reduced in number.

Pearce suggests that it is often the case that when an invasive species takes over, it is allowed to do so because the habitat in which it is doing so is damaged. Quite often the new species acts as a cleanser and brings in other colonisers that feed on, nest in or co-depend on it. The new hotbeds of bio-diversity, evolution and species density are found in such places, even if they be brownfield sites that receive not a minutes worth of human input to manage them for nature.

It is worth quoting this paragraph for you to get a flavour for the thrust of the book: "The more damage that humans do to nature - through climate change, pollution, grabbing land for intensive agriculture and plantation forestry - the more important alien species and novel ecosystems will be to ensuring nature's survival. Aliens are rapidly changing from being part of the problem to part of the solution. And in a world where supposedly pristine habitats require constant micro-management to keep them going, where they are increasingly like theme parks for conservation scientists, the truly wild lies elsewhere. It is in the unmanaged badlands and novel ecosystems. The bits of nature we don't cosset and pamper. The new wild."

I would urge you to read it. I didn't agree with everything written, but my head was turned on more than a few occasions, and I do find myself looking around me with a fresh pair of eyes and an open mind. Is it really time to ditch the idea that everything has its rightful place and welcome in a nature that isn't fragile, but is robust and doesn't need our help?
at February 12, 2016

I imagine that there would be a lot to challenge in that book.
P.S. a bit more room needed on the bookshelf?

Yes Derek, there were times when I wondered whether or not what he had written could possibly be true, BUT... it is worth reading because we need to challenge the way that we manage our world. Even if 25% that is written here is the right way to approach things, then it is worth the effort. Order it from your library if you don't fancy buying it. You won't be sorry.

Look at any patch of 'derelict' land in southern Britain and you'll understand that plants like Buddlehia and the various Conyza are here to stay, and in such quantity that brand new namings of plant communities in the British National Vegetation Classification are now required to accomodate them. Trying to 'defeat' these invaders is nonsensical.
On a slightly different tangent, encouraged largely by this blogsite I treated myself to Alien Plants by Stace & Crawley. Not a field guide but actual plant literature. Am I finally growing up? Well, probably not. But anyway, I read (and had to re-read) one particular paragraph. Certainly opened my eyes. It concerns 'native' plants. We all know these are the plants that were here before mankind started moving things around, introducing those pesky aliens. Or so I thought. I'm not about to argue with the likes of Stace, so I listen when he states, "Despite claims to the contrary...native taxa do not need to have been present in the area for a long time; theoretically, a new native plant could arrive next year, eg if it were brought here from a native area by a bird." I had to dwell on my preconceived ideas of what a native plant actually was, and this spun my thoughts on their arse-end. It's a really thought-provoking book. Steve, if you don't have it I'd recommend getting it. Or borrowing (borrowing I say!) mine.

You might not be surprised to learn that I am currently reading it Seth! So many books, so little time... it looks nice on the bookshelf as well, lined up, in amongst all sort of subject matter.

Height-wise I find it fits in perfectly amongst the Surrey Invert Atlases. Perfection...on a certain somebody's bookcase :)

Just think how many books that you could fit on a Kindle Steve and it wouldn't need half your house.

Steve, are you on commission for advertising that guy's book for so long.

Normal service has been resumed Derek...