It's all about timing

The past few days has seen some unusual behaviour from the ragged collection of birders who sometimes call Canons Farm 'home'. And that is the twitching of uncommon gulls - uncommon in the fact that the species that were involved were uncommon on site, but also uncommon in actually being grounded, and not just flying through, high above the fields as they normally do.

A first-winter Mediterranean Gull kicked the whole thing off by appearing (for at least two hours) in the preposterously named Infront George Field - and Skylark Field, on Saturday afternoon.

Then yesterday an immaculate first-winter Iceland Gull joined in the fun by spending an hour of two in the same fields, then moving onto, and settling down in, Tart's Field (all our fields have names!). A good excuse for another dodgy record shot? I reckon so: 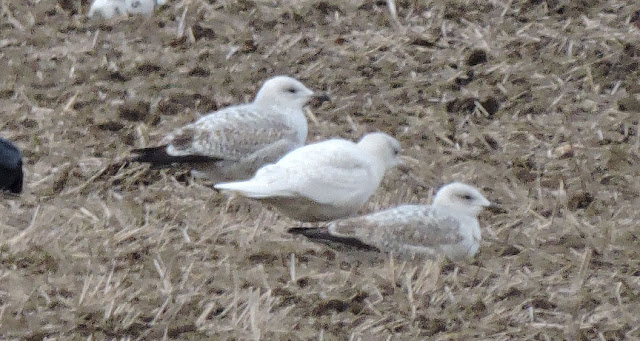 And this morning a couple of superb adult Mediterranean Gulls decided to crash the party, choosing Skylark Field and Broad Field to hang out, long enough for another gathering of local laridae lovers to convene. One of the gulls started to display to a nearby Black-headed and the other was sporting a green plastic ring, possibly originating from Germany.

This is the second record of Iceland and the third/fourth record of Mediterranean on the farm. So why the rush all of a sudden? Well, a double-whammy of circumstances actually. Firstly the fields have just been ploughed, churning up the soil to reveal all sorts of tasty tit-bits for the gathering gulls and corvids. And secondly, the refuse tip at Beddington, where most of our 'local' gulls get their meals, operates on a half-day Saturday and is closed on a Sunday. Rumour has it that it is also closed today. So their usual source of food is not available, but the freshly ploughed fields not a twenty minute flap away are open for business! Had the fields been ploughed mid-week there is a fair chance that these delightful gulls may not have appeared on the farm at all!

PS: maybe we ought to rename Skylark Field as Uncommon Gull Field...
at February 29, 2016

Our local fields have been ploughed too, leading to a descent not by gulls, but by metal detectorists

Whatever way you look at it, there's prizes in them fields Simon!

If you fancy re-naming a field I favour following the theme started by Tarts Field.

Interesting post, Steve. Having said I hadn't seen Gordon for a while I bumped into him yesterday prior to late-afternoon walk around the patch. Was pondering why Canons was doing better than Holmethorpe on the gull front - now we know why!

What are you suggesting then Derek? :-)

And today, Neil, it was a case of 'spot the gull' - they've mostly scarpered, back to Beddington I bet.