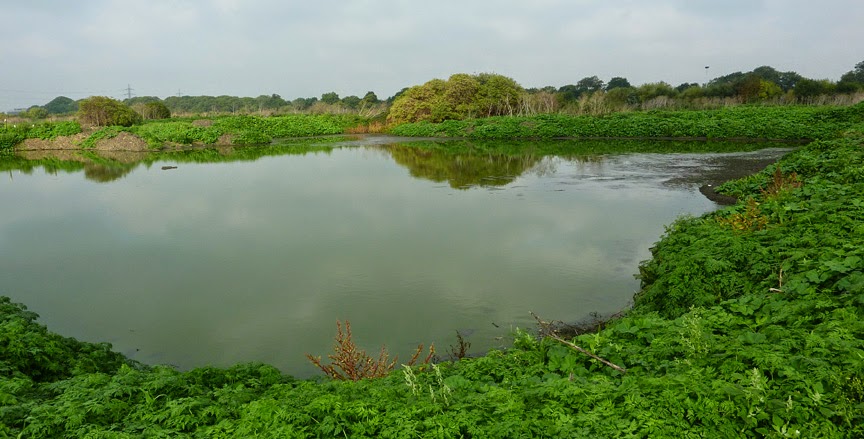 Part 2 of my 'Back to the beginning' thread deals with, you've guessed it, Beddington Sewage Farm.

1974. A flick through the London section of John Gooders ground-breaking book 'Where to Watch Birds' had me squirming with excitement. I had only been birdwatching for a matter of months and all of my efforts had so far been made in the local parks and gardens. In his book, Mr Gooders (who I was to meet on several occasions in later life) revealed a number of places where he was guaranteeing a brilliant day's birding, and none more so than Beddington Sewage Farm. His writing was specific - it included a breakdown of what species could be expected at various times of year, plus instructions on how to gain access to the site. One species that he mentioned captured my imagination above all of the others and that was Short-eared Owl - a shoe-in during the winter months apparently. I wrote to the offices of the sewage farm requesting a permit that would give me their official blessing of access onto this fabled ornithological ground. Within a week I had the (quite frankly) dull looking permit in my hands. It was but a bland white sheet of A4 paper, sloppily typewritten and crushingly underwhelming. I had expected at the very least an illuminated document that would not have looked out of place on a monk's lectern.

And then came the day, the day I had fantasised about for several weeks. It was a cool, overcast October morning. What would I see? My mind was racing with visions of flocks of waders, strange pipits and, of course, hunting Short-eared Owls. I had no idea what a sewage farm looked like, but had envisaged something not unlike an agricultural farm, but with rare birds. For this first trip I had roped in a neighbour and his son, both who shared with me a burgeoning interest in birds. He drove us to the offices of the treatment works, which, being a Sunday, was largely deserted. I was immediately crestfallen! This was no open wilderness, but comprised small neat manicured lawns, office buildings and a series of small concrete squares filled with dark water. There were a handful of Starlings and Pied Wagtails strutting about, but certainly no owls. Was this it? We quickly found a member of staff who was able to direct us away from this bird-less zone and onto the 'real deal' of the fields and settling beds to be found on the other side of the fence. Thank goodness for that!

Take two... relieved and once again buoyed, we wandered down Mile Road in the shadow of the giant cooling towers and into the open vista of the farm proper. This was more like it! A mosaic of small banked rectangles, some the size of a living room, others a municipal swimming pool, took up most of the land that we first came across. Most were filled with wet sludge, and could be circumnavigated along narrow ridges. In places this sludge had dried to allow colonising vegetation to spring up. Mostly it was wet and pungent. Beyond these, open fields were largely grassed-over, being edged with sparse hedgerows and the odd mature willow or elm. Alongside, concrete culverts ran with fast flowing water, abandoned brick outhouses whispering of the old ways. It felt as if we had stepped back in time. The most obvious landmark was a giant banked reservoir, as tall as a house and as wide and as long as a couple of football pitches. We climbed the grassy bank to be confronted by a sea of effluence, a virtual inland estuary, tributaries of water snaking into the centre of the goo. And here be waders! Maybe not the hoards promised by JG, but a flock of Lapwings, with a scruffy, lethargic Grey Heron close by. After an hour of scratching about, uncertain of where to go and what to do, my neighbour announced that it was time to go home.

This first visit was not a resounding success. My list at the end of the morning was modest and did not contain any of the hoped for prizes. But the place itself was full of promise. I returned very soon afterwards (entering from the Hackbridge side, much closer to home) and started to explore the farm properly. We had, I soon realised, barely scratched the surface on that initial recce. Short-eared Owls were indeed there, and presented themselves to me one fine late autumn day, along with Green Sandpipers and Jack Snipes. Small groups of skittish Teal flew from flooded beds. Large flocks of finches fed on the abundant growth. Around every corner there was something of interest. I had found somewhere that promised not just great birding, but also acted as a bolt hole, my own secret kingdom. To me, this was heaven.
at September 20, 2014

Steve,
This is fantastic stuff; well written and full of nostalgia - just as us old'ns like it. Sown a few seeds - keep it up!
All the best - Dyl

Cheers Dyl, Praise indeed from your good self. Thank you.

A great read Steve. Your account reminded me of a similar first experience I had at Tring Reservoirs in the 60`s, which also had a sewage farm back then. `That` book must`ve stimulated a generation of fledgling birdwatchers, I`ve still got the 1967 edition, battered and bruised, but flick the pages and the memories come flooding back. Whilst on the subject of sewage farms, how about this trio of favourites from the old days - Maple Cross, Perry Oaks and wonderful Wisbech. Cheers, Paul

Hi Paul, I never visited Maple Cross, but did Perry Oaks (Buff-breast Sand and Pec Sand standing next to each other) and Wisbech (most nauseous smell ever). Although I used to live in Tring (until I was 11) I didn't bird, so the reservoirs weren't on my radar.