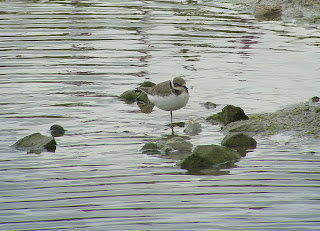 This isn't a post about the disbanded Scottish pop band of the 1990s (apologies for those seeking images of Marty Pellow), but a reference to the state I found myself in at about 13.00hrs this afternoon at Beddington Sewage Farm. The promised rain hadn't materialised (apart from a bit of pathetic drizzle) so I assumed that that was it. I strode out across the treeless farm, ignoring the growing darkness bubbling up from the south. That darkness harboured a good half-hours worth of soaking rain and I embraced it fully. Bins, scope and clothing took a hit.

Birdwise, not as good as hoped for, although at least 4 Hobby were hassling the few hirundines present (and we watched two of them hunt down a Swift in tandem, plucking the hapless bird out of the air after a brief chase), 2 LRP (one pictured above), 1 Ringed Plover, 2 Green Sandpiper, 1 Kingfisher, 1 Wheatear and 1 Whinchat.

The banter between the gathered faithful kept boredom at bay, with subjects up for discussion ranging from Wayne Rooney's hair transplant, The Rugby World Cup, stringing, Peruvian night birds, useless facts and the proposed cultivation of the Hemp that has sprung up beneath the bird feeders.
at September 04, 2011

'Not as good as hoped for'.... Those of us in the northern territories of Engerland would gladly donate a few painfully plucked hairs to Mr Rooney in exchange for the sight of two hobby's hunting down a swift!
Cheers
Allan

Allan, that is a fair comment, as in almost 38 years of birding that is the first time I have witnessed a Hobby take a Swift

I'm curious to know what the discussion about stringing focused on - I have been wondering about a few claims recently!

I couldn't possibly say Neil. Blogs have eyes and ears...

You work in the media - publish and be damned!