Sometimes you are in the right place, at the right time. And sometimes you are only in the right place at the right time because you have stood there for days on end, waiting for it to happen. Today it happened. It has become a bit of an 'October thing' over my garden, here in Banstead - a day (or two) of concentrated diurnal Redwing passage, so much so that I stand outside the house, at dawn from October 1st, waiting for it to commence. My previous back garden successes have included:

The Surrey record, up until this morning, stood at 15,000 west at Beddington SF on 12 October 1997. I had no expectation of ever reaching that figure, and thought that my 7,724 from last autumn was a bit of a one-off. How wrong was I...

It started to look good yesterday afternoon/evening, with the Flysafe/BirdTAM website offering up graphs and charts that predicted the following: 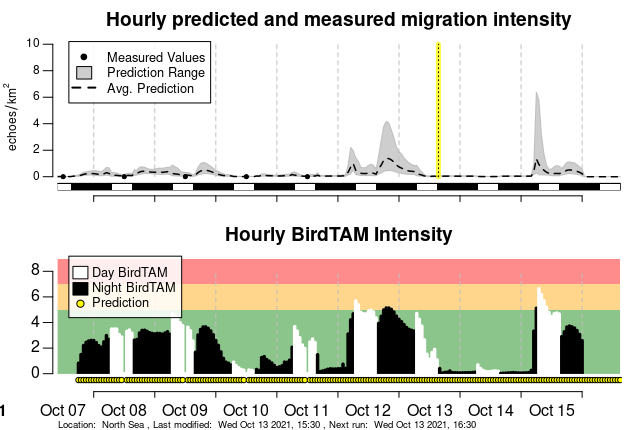 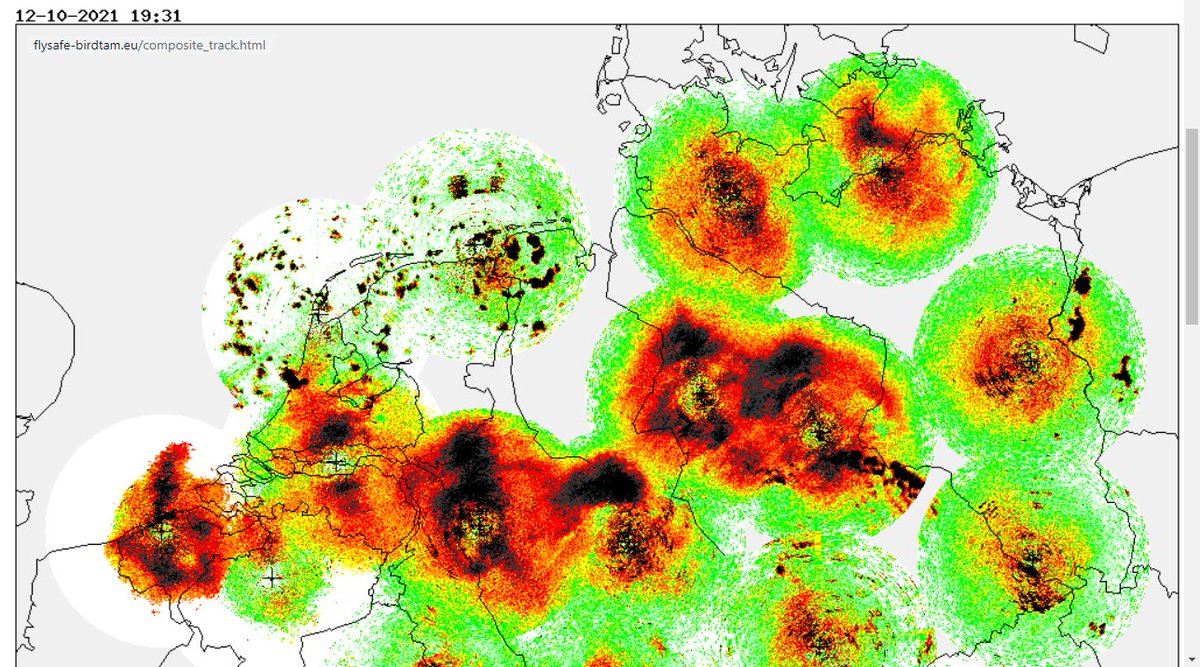 The map above is showing bird activity at 19.31hrs yesterday evening over the Low Countries, the red colours where it was intense, with black showing even higher activity. It was reported that these birds were moving on a W to SW bearing. Blighty was beckoning!

I was stood outside by 06.45hrs, mug of tea in hand, full of hope. This was a routine that I had been undergoing for the previous 12 days, but today it seemed as if there would be a fair chance of some of these thrushes (for that is what this activity was thought to refer to) making it across to Banstead. By 07.00hrs the first flocks started to appear - just small flocks, but regular enough to suggest that we might just be on to something. And for the next hour the numbers just ramped up, the flocks getting bigger and more regular. By 08.00hrs I knew that I was witnessing something very special indeed. For 10 minutes, either side of 08.00hrs, 4,000 Redwings barrelled through, including an unforgettable flock of 1,200. There were several occasions when I just had to take my eyes away from the binoculars and take it in - I was surrounded by thrushes, either side and above me. The main thrush stream was to my south, and this was the line that I concentrated on, but at a cost, as birds were behind and above me. The lone vismigger has to make choices, and mine was to follow the main stream. How many did I miss? Thousands.

Sometimes the main stream moved a few hundred metres north and appeared directly over the garden. My line of sight is compromised by a few roof tops and an ash tree, but by running up and down the garden I can open up new vistas, and this I continually did, chasing the stream, but knowing that I would miss many more. At times I would randomly look up and focus way up high, and there would often be a Redwing flock come into view. The top map shows the main streams and their direction, with the house position represented by the blue circle. The open ground to the left (west) of the picture is most probably a much better place to observe these movements, but something stops me from trying it - what if my thrush lines peel off before getting there? I know that I can see them from home. Maybe one day. Until 09.00hrs they didn't let up, flocks coming through in great sizes - 250-300 commonplace, a few 500+ and another 1,000+. These are sights that will be cherished and remembered. From 09.00hrs it quietened down, and by 09.45hrs it was quieter still, but having said that an uneventful five minutes would be gatecrashed by another big flock. I was kept on my toes. The 8/8 cloud cover started to break up at 10.15hrs and I was under blue skies only 10 minutes later. Slowly, the Redwing tap was being turned off, and by 12.00hrs, when I stopped watching, I had recorded a remarkable 26,013 Redwings.

I was not the only person enjoying the spectacle. Eastern Surrey seems to have been blessed with these thrushes moving on a broad front: John Birkett at Croydon (1,500); Ian Jones at Wallington (4052 W); Phill Pentek at Richmond Park (5,000); Gordon Hay at Holmethorpe (12,200 W); John Clark and Graham Stephenson at Tweseldown (just over the border in Hampshire, 12,740 WNW) and... drumroll.... Wes Attridge, Robin Stride and Mark Davis at Leith Hill, who recorded a total of 34,727, a new Surrey record, and one that will also be the highest count submitted to the Trektellen data base when it is uploaded. Here are the UK's highest Redwing counts, of all time, on the database - Banstead appears at number five! (soon to be six). 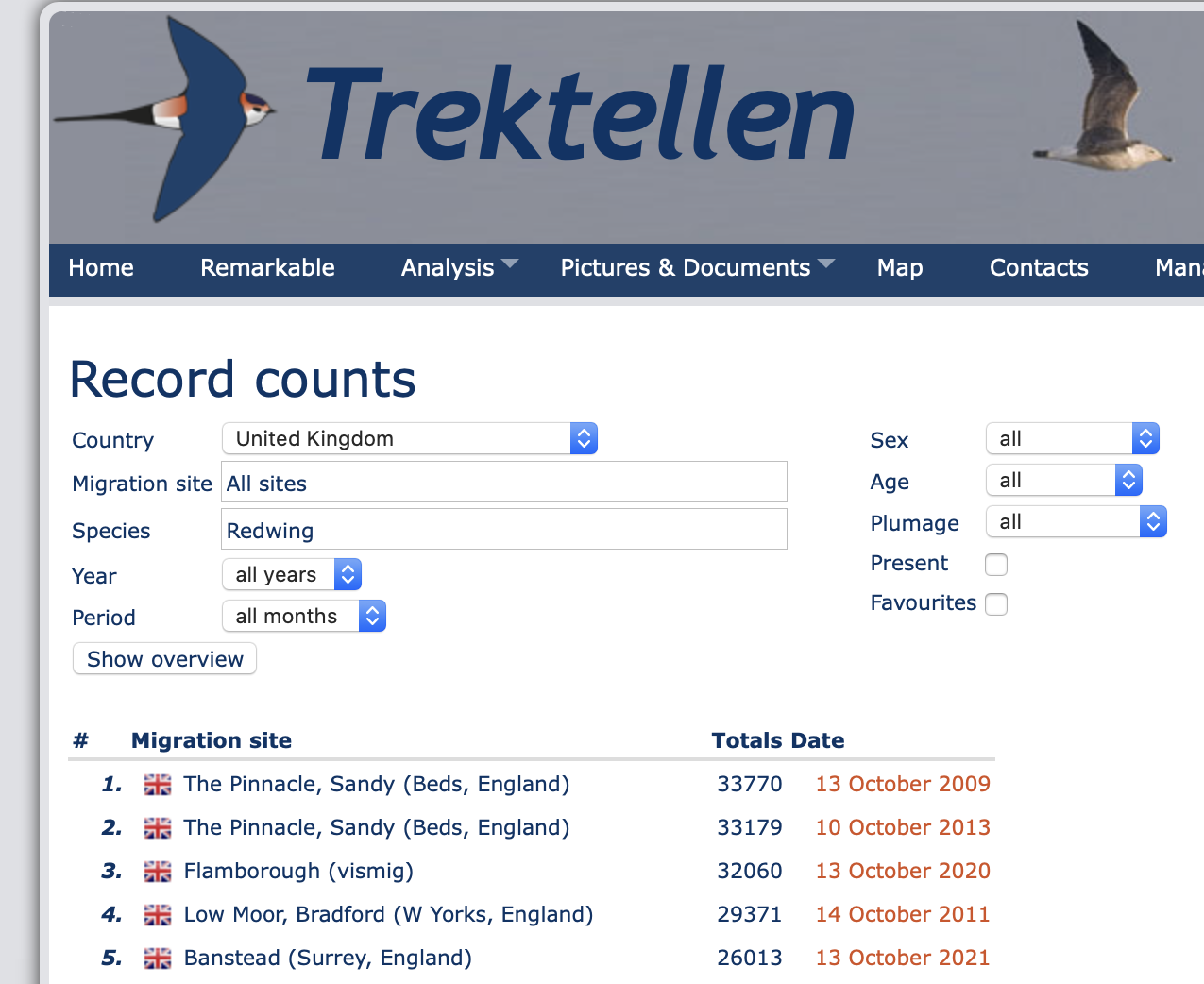 There are reports of Redwings still on the move. Zach Pannifer has had over 1,000 west over Little Woodcote this evening. In previous autumns, when I have had a good Redwing day here, they have been followed by one or two more. Will I be out at dawn tomorrow morning? What do you think...
birding Redwing visible migration