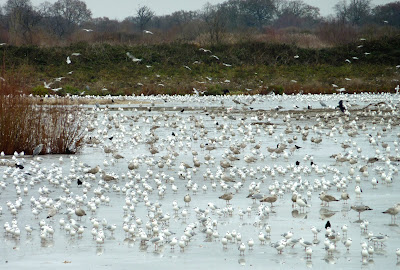 A post-Christmas birdwatch was enjoyed at Beddington Sewage Farm today, myself already warm with the glow of enough calories on board to fuel the running of Dungeness 'C' reactor and happy with the England cricket teams continued demolition of Australia.

On arrival it was obvious that the landfill site was operational, as thousands of gulls were present. After settling down, having had an hour or more scanning and also having walked across to the enclosed lagoons, the time came to estimate those numbers present. My gut reaction was to plump for a total larid mass of, lets say, seven or eight thousand individuals, based on nothing more than educated guesswork. However, when I tried to add a little bit of common sense to the process, it only helped to prove that my initial estimate was woefully short. I was quite happy to claim a fairly positive count of 375 Lesser Black-backed Gulls. So I used this as a starting point - a number not estimated but actually counted out, one gull at a time. I reckoned that there were at least double the number of Common Gulls present, so I arrived at a total of 750 for them. Pete, Johnny and Frank now joined in. For every Common Gull we had seen there were at least 15, maybe even 20 Black-headed present. Taking the lower figure of 15 and multiplying this by the number of Common Gulls we reached a total of 11,250 Black-headed. Herring Gulls were plentiful, but not as numerous as Black-heads, so we settled on a total of 4,500. Other gull species present were: Great Black-backed (15), Yellow-legged (2), Mediterranean (1) plus a rather fine first-winter Iceland. So, the gull grand total was in fact 16,894, rather more than my initial hunch.
at December 27, 2010

Always tricky. We have lots of Common Gulls here at times. One of the problems is that the pre-roost flocks are very flighty and pretty much single species. Counting is not really an option, and the method you've used, a method I apply myself given the option, clearly won't work in a single species flock. I've tried photography, a technique I use often on flying flocks to check my estimates, but I just can't get a decent enough pic of these Common Gulls. Last year I estimated a flock of 7,000 at one site, conservatively I would reckon, unfortunately that's a much larger number of Common Gulls than the Orkney record flock - don't think our recorder liked it much so I need to find a better method, I think some proof is required .... photography is probably the answer, just need to find a more distant, elevated viewpoint I reckon.

Searching gull flocks is my idea of fun, especially as there is always the chance of interesting species amongst the Herrings and Commons, I rather envy your Beddington flock, neat to find Med and Iceland and I'd like you to transport the Yellow-legs please, I always live in hope of the extraordinary, occasionally its there but doesn't fit a species profile, slightly frustrating.

Merry Xmas Steve and best regards for the New Year

Thanks Alistair. I always remember you as an avid counter of birds. Generally birders are prone to under estimate. Happy New Year to you too!

I like the technique you've outlined there Steve, and wonder why I've never thought of it. I suspect I would struggle with it on the Axe Estuary though, because to a certain extent each species tends to gravitate to favoured areas, so the mix is not homogeneous.

A nice mix of species at Beddington though. We may get more Meds, but definitely not as many Glaucous-winged.

Ah Gavin, another fellow counter. There's a whole book to be written about counting techniques. Maybe you could be the author?...