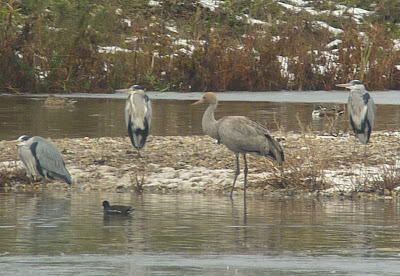 There I was prostrate on the sofa, re-watching Series One of Mad Men with man flu as company when the communication system went into overload. Texts from Johnny Allan - 'Common Crane landed on lake at Beddington' - followed moments later by a phone call from David Campbell - "Are you going?" - convinced me to rise from my sick bed, Lazarus-like, and hotfoot it to the sewage farm.

I collected David from his aborted Canons Farm stakeout and we arrived promptly at Beddington without any negative texts being received or accidents on the fast melting slush and ice. A brief jog onto site (yes, I can still run if prompted) saw us feasting our eyes upon a fine juvenile Common Crane (pictured above). It seemed in good condition and stayed for the rest of the day. This was a big bird for London and Surrey listers, the first truly twitchable wild one. Most of the Beddington crew were fairly blase about it (they had seen an adult fly over the farm back in the spring) and I had already scored in Surrey with a bird on Thursley Common in the 1980s. But for many of the 100 birders who visited the farm, it was a case of losing their Grus grus virginity.
at December 05, 2010