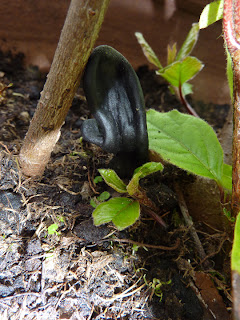 This is an earthtongue, that I reckon is Geoglossum cookeanum, based on the fact that it hasn't got a hairy, tapered stem. Just in case a knowledgable mycologist has stumbled across this humble twaddle, and they think that I'm incorrect, please let me know. This is a new species of fungi for me, and was found growing out of the soil in a pot where a Viburnum tinus is planted, only yards from the back door.

This handily demonstrates one of the positives of pan-listing - you can always find something that you haven't identified before even where you live. You needn't go outside!! This week I've found a spider and three species of fungi in the back garden that I've not knowingly seen before, although all are common and no doubt previously ignored/overlooked.

I was too busy (couldn't be bothered) to look critically at a few snails and slugs that came out during the recent wet weather, but I suspect a few of them might be new. With the total creeping up to 2959 I need to tackle them (and some nearby mosses) if I want to get to 3000 by the end of the year.

A wander along the north downs at Gatton handily produced a dozen species of fungi of which several were new - Common Inkcap included. There are still a large number of common fungi that I haven't identified yet, either through my novice status, ignorance or not having been in the right place at the right time. There's still plenty of scope here in the next few weeks.
at November 06, 2011

Have you been planting Pontefract Cakes?

Ah Andrew, you've rumbled me.... and I had a number of confectionery related hoaxes up my sleeve!