The Smaller Moths of Surrey launch 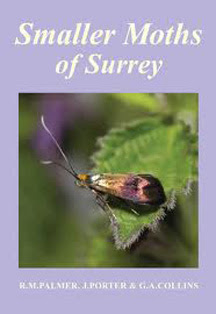 It was my pleasure to attend the launch of the latest book in the Surrey Wildlife Trust's ground-breaking series - that of 'Smaller Moths of Surrey' by Bob Palmer, Jim Porter and Graham Collins. All three authors were present along with the guest of honour, John Langmaid. Bob and Jim gave short speeches and afterwards a discussion took place on the state of micro moth recording in the UK and where the micro effort in Surrey should now go. Most of those gathered (including myself) were contributors to the book and it was pleasing to be able to hold and appreciate something tangible that is testament to everyone's efforts. My own record input is dwarfed by most of those other contributors, in particular the authors who have spent countless hours not only in the field but also hunched over keyboards and page proofs. They thanked the back-up team of which every publication relies upon and who so often remain anonymous. I was lucky enough to find myself sitting next to John Langmaid and spent an enjoyable time chatting away to him - for such an emminent lepidoperist he was most humble and seemed genuinely interested in my back garden records. I didn't quite come over all star-struck and tell him that I saw 'his' Yellow Underwing this summer.

At 550 pages this is the thickest of the thirteen SWT series and can be purchased from here. The book contains distribution maps for every species recorded during the survey period (post 1986) with details of sites and dates for the more notable of them. Those species recorded prior to 1986 but not since each have a written entry discussing the historic record. Unconfirmed records are also treated this way. There are also 32 colour plates of high quality photography depicting a cross section of the species recordeded in the county. The Surrey Wildlife Trust must be congratulated on producing such a wide ranging series of books, all to a high standard and each has garnered a reputation way beyond the county boundary. Apparently the next projected volume will be on spiders.
at September 15, 2012

Thanks for knowledge sharing