Then and now - painful birding 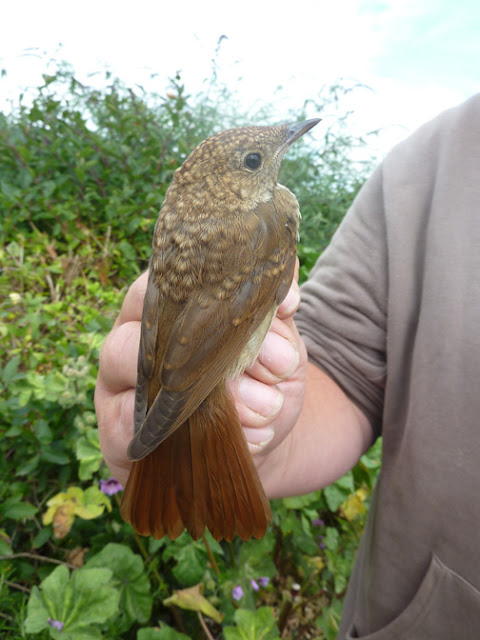 Regular visitors to this blog (all three of you) will recall that I spent most of July at Dungeness. I've posted a fair bit about the plants and moths that I saw, but so far have not mentioned birds. There's a good reason for that - it was very poor for them. In July 2010 a week at Dungeness provided for me a White-tailed Plover (NOT Lapwing thank you very much), Purple Heron, Great White Egret, Roseate Tern and up to 70 Mediterranean Gulls in one sitting. This year was a case of playing 'Spot the Med Gull'- they must have had a poor breeding season close by - and looking at high water levels on all of the pits that kept the waders away. There were two sudden adrenalin rushes however, when a Little Swift was claimed one murky morning over ARC (we spent an hour searching through a thousand low-flying swifts) and also when a Black Stork was watched drifting above New Romney and I waited at the point, in considerable heat for a few hours, hoping to pick it up drifting southwards. If it did it must have drifted over very high. What I did see though included a Serin - which took up residence for five days between the point and the observatory, only giving the briefest of views as it flew over calling - and this juvenile Nightingale, pictured above, after it was trapped in the newly built heligoland trap situated in the moat.

Today I felt very keenly for a member of the local birding fraternity. This birder has staked out Beddington Sewage Farm on an almost daily basis for the past God knows how long. Today there was a Long-tailed Skua recorded flying over Beddington. My first instinct was to be pleased that his efforts were being rewarded. I texted him - 'Did you get the LTS?' The reply came back 'Nope' The poor chap was on site as well, no doubt grilling the gulls or paying particular attention to a skua-less portion of the sky as the skua passed through. If you want to see the photographic record of this first for Beddington then click here. The skua's observer is not without his own rights to claim that the enormous amount of time that he has put into birding the sewage farm warranted such a reward. I just think that his recent travels means that we need to make sure that the sky behind the skua is in fact from Surrey and not just off of Corvo... ;-)
at September 25, 2012

Two points Steve -
I've not seen a Serin in the UK.Its a proper MEGA up here, and Plover, yes,sir, indeed.

The wild storm abates up here tonight and I'm off the morn...

Stewart - the next time one of those pesky small finches come my way, I will send it north-eastwards. And I'm glad that you too are a defender of what is proper when it comes to bird names. Wood Nuthatch is my least favourite... oh, and Pied Avocet. I still don't like seeing a systematic list start with swans. I could go on.

In my life I will never say Lapland Longspur, not even in the 'states!