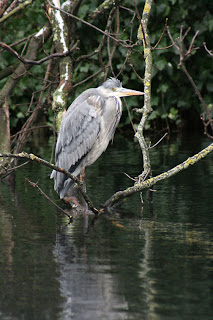 During a bout of Twitter ping-pong between David 'Devilbirder' Campbell and myself (over whether a Dunlin or Woodlark was a better Canons Farm bird) he ended the discussion by claiming that 'his' Dunlin would beat 'my' Woodlark in a fight - fair do's. This then got me thinking about what bird on the British list would, in fact, be the best species to have by your side when it all kicked off...

This is not as simple a decision as it sounds. Size immediately comes into play. You can imagine the mismatch if a Goldcrest took on a Canada Goose. Then manoeuvrability needs to be taken into consideration, although what's good in the air (a Swift, for example) might be a sitting duck (or in this case a sitting Swift) on the ground - by the way, Swifts have secret weapons, as they possess very sharp claws, although being on the end of stumpy legs degrades their weapon of choice. Weight will be important, to either flatten the opposition or to enable a strike to have plenty of momentum. We also need to take into consideration the instruments of pain that the species have at their disposal. The bill (raptor sharp, heron dagger, Hawfinch bulk), claws (raptor talons, swift needles) and wings (a swan can break reinforced concrete with a single flap!). Length of neck and leg should not be forgotten.

But before we get carried away, the venue of battle needs to be factored in. A Gannet sitting on the sea will see off a Crane (that will be drowning), but on land the long-legs and neck of the Crane will enable it to run rings around the floundering Gannet and nip in to land savage blows with its bill. Smaller raptors are all well and good in the air, dodging assaults and landing glancing blows with their talons, but would have to submit if a Raven decided to have a go on land.

Raptors will be early favourites to supply the species that will reign supreme, although the falcons will be too lightweight, larger hawks will lack reach and although eagles will make a mess of most birds they will be slow compared to similarly large species like herons and cranes. It is here that I think we will find our champion. The larger herons have wicked dagger-like bills, a long reach, lightning reflexes and a long gait to enable quick 'in-and-out' jabs. What about a crane? Or a stork come to think about it...

THERE'S ONLY ONE WAY TO FIND OUT!!!
birds

Gibster said…
Parakeets. Ultimate p*sser-off'ers of all other species, huge strong beak, dextrous claws, naturally boisterous (ie borderline mentalists), aerial manoeuverability, invasive nature, camouflaged plumage, goes about in huge gangs...and if all of that fails they'll just deafen their opponents into submission. And with practice they'll sit on your shoulder and go into battle with you. I 'ates 'em!!!
14 April 2013 at 19:18

Gibster said…
Although, I remember that amazing footage of a Goshawk chasing down prey on woodland floor, and I reckon they're mental enough to tackle an ostrich on acid...I may change my vote...
14 April 2013 at 19:22

Steve Gale said…
You have a point there Seth - a gang of angry parakeets would be a handful for any other species!
15 April 2013 at 09:17

Andrew Cunningham said…
The Crane and Gannet fighting on the sea would do well to look out for White-tailed Eagles being chased by angry Parakeets.
16 April 2013 at 09:20

Dave Boyle said…
There was somebody killed in New Zealand a few years ago by a White-faced Heron, which is probably about the size of a Little Egret. It had been brought in to a rescue centre in a box, somebody peered in through a hole & got a beak through his eye into his brain.
My money's on a heron!
16 April 2013 at 17:11