When rare birds really were rare 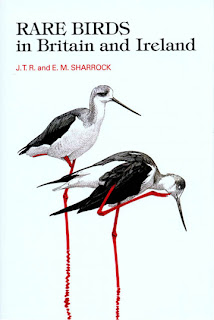 Back in 1976 I purchased 'Rare Birds in Britain and Ireland' by JTR and EM Sharrock, one from the T&AD Poyser stable. I was indescribably excited by this book, mainly because at the time anything pertaining to rare birds was generally not acknowledged by the ornithological mainstream. Rarities and twitching were still considered the pastime of the idle and unwashed, with the business end of such anti-social behaviour carried out in public telephone boxes and rough pubs. To have such a publication like this was in some ways an affirmation of what we did but also a tremendous read. I spent hours and hours poring over the records of all of the rarities recorded up until the end of 1975 - most of the species mentioned being just a wild fantasy to my teenage birder's feverish mind.

Most of these small totals are, of course, indicative of the smaller numbers of birders in the field, a lack of knowledge and, maybe, a pinch of genuine rarity that is not now the case (particularly the eastern vagrants). But looking at that list I can see how some of my great twitches in the late 1970s were for birds that today's birder wouldn't even get out of bed for. It is, at best, a reminder of how birding has changed and a history lesson to me of how things have changed even in my birding lifetime.

Recently it was remarked upon that my blog posts have been all about birds. The reason for this is largely down to the naff weather that is suppressing plant growth and knobbling any lepidoptera that thinks about beating a wing. However, the birding bug is obviously still inside me and has been wriggling about and reminding me how enjoyable it all still is...
birding. rarities twitching

Stewart said…
All you need to do is look at Ian Willis's drawing of Olive backed Pipit to see how little anyone knew of these birds. At this time there wont have been any decent photos let alone sightings!
2 April 2013 at 19:57

Gibster said…
On the flip side, I used to say, "ooh nice, there's another turtle dove on the daylist". Hand on heart, I've seen more Yankee Warblers in the UK than I have Turtle Doves during the last 4 years.
2 April 2013 at 21:08

Steve Gale said…
That's another aspect of birding that you've identified there Stewart, the largely innacurate illustrations that we had to put up with.
3 April 2013 at 09:18

Steve Gale said…
Seth, the demise of the Turtle Dove is a sadness that I feel keenly. Two years ago I stayed at Sandwich Bay for a week and was delighted to find them purring still in small numbers.
3 April 2013 at 09:20