Vis-migging for the hard of seeing 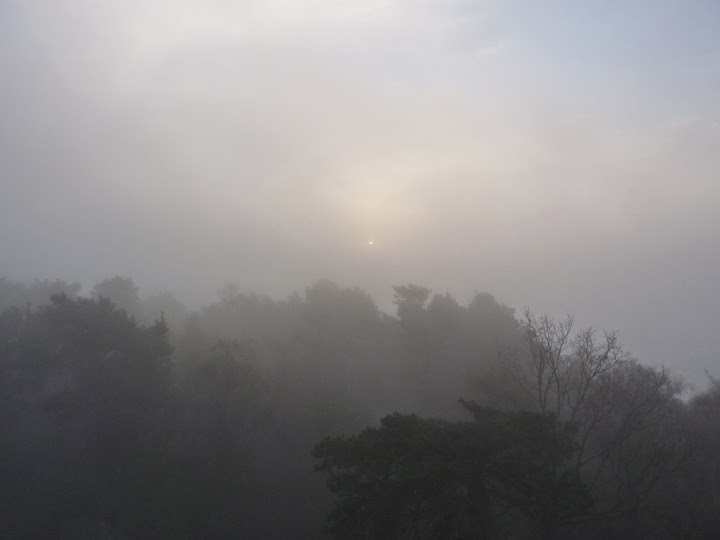 There are birding places that are famed for the sheer spectacle of the avian migration that appears above them - The Bosphorus. Eilat. Falsterbo. The Straits of Gibraltar. Leith Hill. Hold on, what was that last place mentioned? Leith Hill? That pimple of a hill to be found in deepest, darkest, southern Surrey?

National Trust ranger and Indiana Jones look-a-like Sam Bayley has set up a migration watchpoint from Leith Hill Tower (the top of which measures in at a dizzying 1026 feet above sea-level). Big for us southerners, laughably small to you northerners. This morning was the first organised watch and eight motley Surrey birders (including myself) gathered out of a mixture of enthusiasm, nosiness and a belief that our much-maligned county has a migration hot-spot waiting to be discovered.

We gathered at 05.45hrs in the dark. And in the fog. The picture above was taken at 07.00hrs, in the fog. You can just see the sun fighting a losing battle with the stuff. We were still fog-bound at 09.30hrs. Then it cleared. Not the most auspicious start to this brave new enterprise. But, when all was wrapped up at 13.00hrs we had recorded Peregrine, Common Buzzard, Raven, Firecrest, Crossbill and  Brambling among others. None of these were actually moving through though - to be honest little was moving, although a Swallow did nip through northwards and three Lapwings coasted west.

However, it was an enjoyable morning, the fog-shrouded (and mostly bird-less) hours filled with much banter and preposterous predictions as to what might be seen from here in future watches. Black Kite seems to be the most realistic of the suggestions. Watch this space...
Leith Hill

John said…
Hi Steve, Much better to sit having a beer and lunch in the sun at the Stephen Langton as we did on Tuesday, having three Buzzards aerial wrestling overhead at more or less roof height. Sheer magic.
6 April 2014 at 21:49

Steve Gale said…
I know the Stephen Langton well John. Had one of the best Sunday roasts there a few years back. I can taste those roast potatoes right now...
7 April 2014 at 18:39