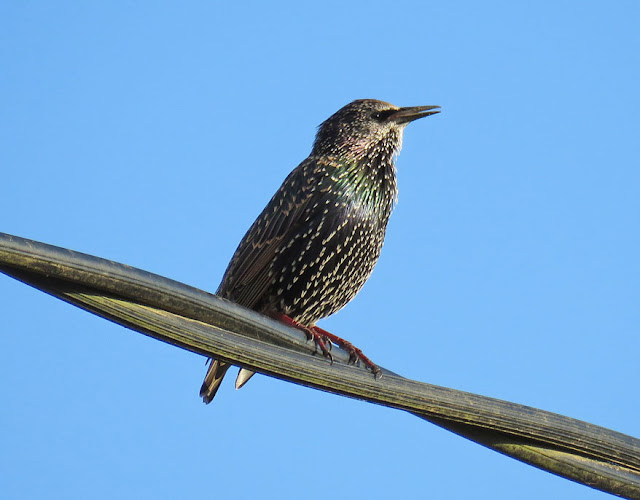 It started with a short film-clip that was shot sometime the 1950s. Trafalgar Square. Looking up at the statue of Nelson, motionless on top of his column, surveying all before him, in grainy black and white. Atmospheric and redolent of faded Empire, rationing, post-war gloom.... and Starlings. Thousands of Starlings. Swirling around our fabled Admiral, clouds of chattering, screeching birds, getting ready to roost in one of London's most famous squares. In 1950 over 100,000 Starlings were recorded roosting there. And it got me thinking of the roosts of my youth and how we all took this most humble of birds for granted, even dismissed it from our list of what were considered to be birds 'worth bothering about'. It got lumped in with House Sparrows and Feral Pigeons. Not worth looking at. This was, of course, before their numbers plummeted.

During the 1970s I grew accustomed to seeing the pre-roost gatherings of Starlings over Sutton. Black vortexes that morphed in shape as others joined in, impossible cones, funnels and clouds that should surely collide and break the individual bodies into a mess of blood and feather. But they didn't, seemingly flying for the sheer joy of doing so, showing off their aerial mastery to whoever was witnessing it far below. 5-10,000 was commonplace. In November 1981 I was at Walberswick in Suffolk, standing by the Lodge and birding over the reedbed below. The numbers of Starlings were truly staggering. To put a number to the gathering roost was foolhardy, but, being foolhardy, I did - 400,000. Not enough. Could have been double that - no, triple that. It was mesmerising. Even though we were hundreds of yards away, each convulsion in the flock was accompanied by a spine-tingling "whoooosh!" This was nature at its most awe-inspiring. Every late-autumn visit to Dungeness would involve clouds of them coming in off the sea, ragged clots of black making landfall and heading inland. Sometimes they would follow the coastline, a conveyor belt of messiness that never broke down. Again in their tens of thousands.

And then the gatherings seemed to stop. The number of migrants drained away. Those that did remain were in much reduced numbers. Shadows of what had gone before. Relegated to being remembered via grainy black and white film. Big Starling roosts do still exist, but they are things that need to be tracked down, not everyday events over everyday skies. Somerset levels, Brighton sea-front, both will provide a show if you want one. When I now look out of my window and see a group of 50 Starlings gathering on neighbouring chimneys and aerials, I get excited. 50 is a good count. Maybe they are coming back. And, at the same time, maybe just a part of me is transported back to my youth, when it was all taken for granted.
birds roosts Starling

Lucy @ A Natural Interlude said…
You do paint a good picture, Steve! This post really got under my skin - such beautiful, vast, enthralling experiences.
2 October 2016 at 20:41

Derek Faulkner said…
We still get some decent size flocks of starlings on the marsh most months of the year but winter especially. I don't see them around the garden much these until I make the mistake of hanging a load of fat balls out and then by magic, every starling on Sheppey appears and strip every last crumb of the fat balls in minutes.
3 October 2016 at 11:12