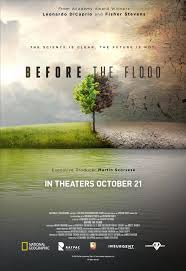 If you haven't seen this film yet then maybe now is the time to do so. You can find it online, free to view, and a more sobering watch you will be hard pressed to find. The man behind it, actor Leonardo DiCaprio, has put together a documentary that looks at climate change, where we currently stand and what we can do to deal with it. Tipping points are too close for comfort (in fact we have already got to a point where in the short term we cannot rectify the situation in our lifetimes even if we stopped doing all that is wrong right now). We all contribute to its existence and big business certainly doesn't want us to change our ways - the oil companies and beef producers don't want to give up a cent, pound or euro of profit, even if it does mean that large swathes of the globe will become deserts and many coastal settlements plunged underwater. Economic migration will become biblical, wars will be fought over water, the planet's weather will turn wild. Life as we know it will change, and if nothing is done, change forever.

There are people and companies out there working hard to find real solutions - Tesla, for example. China and Sweden are apparently getting their acts together. But there are others - big business, India, a climate-change denying President-elect of the USA  - that are looking the other way.

Greenland's snow is disappearing. Within a few years you will be able to sail directly over the North Pole. Islands in the Pacific Ocean will become 21st century versions of Atlantis. Rain forest clearance (to produce palm oil and create open land for cattle) is screwing up our atmosphere and condemning thousands of species to extinction. The frozen north is becoming slush and will release vast quantities of methane into an already compromised atmosphere.

But we still eat beef. Still buy products with palm oil in them. Still drive cars. Still fly across the globe. Still elect governments that play lip-service to the situation. We are a self-destructive and nasty species.

We can all start to make a difference. Start to question what we do and how we do it. Elect people that will take on the challenge. Too little, too late? Maybe. But at least we can try. The big decisions, the real game-changers are in the hands of those at the cutting edge of technology, trying to find reliable and clean energy alternatives. We can wean ourselves off of processed foods. We don't need to have three or four cars out on a driveway. And do we really need to fly half-way across the world to indulge in a rich man's holiday?

Or we can do nothing. That would be criminal.
Before the flood climate change

Simon Douglas Thompson said…
Ha. The movie is probably full of things called "facts" spoken by people called "experts" that apparently we are supposed to ignore now.
18 November 2016 at 14:40

Steve Gale said…
That's exactly what the 'climate deniers' have said about this documentary.
18 November 2016 at 14:45

Derek Faulkner said…
Well I agree with both Simon and Warren, especially Warren.
20 November 2016 at 06:52

Stewart said…
Lets face it Steve, you and I know the truth. There will be no change. Never. It will be too late. Not until something drastic reduces the human population. I'm glad we dont know when that is, but be assured, it will happen one day.
23 November 2016 at 19:56