Back in the saddle

February 13, 2017
It's been cold, hasn't it? The thermometer might not have hit the lows that it had done earlier in the year, but the low grey gloom, piercing easterly wind and stinging sleet kept this part-time birder indoors. I found myself a new natural-history themed project to get my teeth into, but more about that another time.

Back to today. Sun! What a treat, all day sunshine which, when out of the still persistent easterly, had a touch of warmth about it. I ended up on Walton Downs, part of which is taken up by Langley Vale Farm - the very same farm where the Woodland Trust is creating the Millennium Wood. I've banged on about this project at length, mainly from the perspective of worrying that the rich arable plant flora will be lost, the ancient shaws and hedgerows be irretrievably merged into the new planting, and that the few pairs of Lapwings that breed there will disappear. 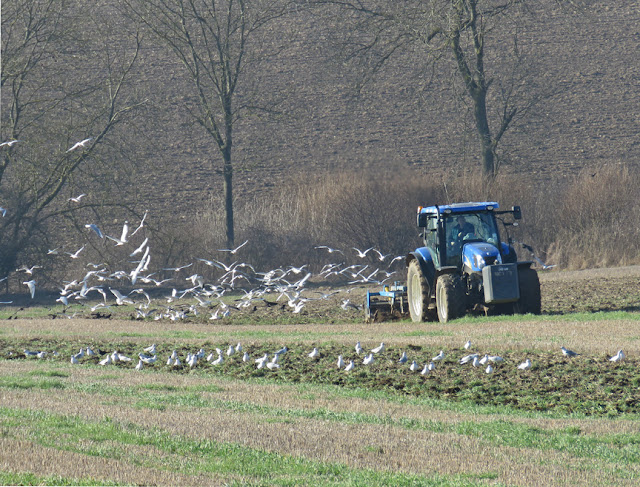 There was a lot of activity going on. A tractor was disturbing the soil in fields to the north of Round Wood, not a ploughing per se, more of a scarifying. Up to 400 Jackdaw, 300 Black-headed Gull and 75 Common Gull were in close attendance. Teams of men were erecting a high fence across the field south of Little Hurst Wood, and when I say high I'm talking 2m plus! More planting appears to have been carried out in the fields butting up to the 'drove way' footpath that leads towards Headley. And the scarifying of further fields has been carried out on the eastern side of the site, with more of those awful plastic pipes for the protection of young trees dumped alongside. It doesn't look promising... however, just to stop me from becoming all 'doom and gloom', one of these fields held a resting flock of 17 Lapwings - they were gone three hours later.
Lapwing Walton Downs

Gibster said…
Aw, that's a nice touch. Re-creating a no man's land complete with disturbed earth and fencelines. Just need some mustard gas and the odd German A7V and we're pretty much good to go...
13 February 2017 at 21:09

Derek Faulkner said…
Guess the only way that you can look at it Steve, is that it will eventually create a different type of habitat, plus, until it becomes scrubby, many of the flowers will continue to survive.
14 February 2017 at 05:57

Steve Gale said…
Derek, the arable plants cannot compete with grasses, and once the old farming practices cease (as they largely have done) they will just get swamped. Very sad that such a rare botanical site is just being let to wither away.
14 February 2017 at 08:37

Derek Faulkner said…
It's always a real shame when these various Trusts and wildlife groups have different agendas and don't compromise with each other, it goes on quite a bit.
14 February 2017 at 10:16

Simon Douglas Thompson said…
The win made it far colder at the weekend than I have felt all winter, even in subzero temperatures
14 February 2017 at 14:51

Mick Lacey said…
Is there a chance that The Woodland Trust don't know about the rare arable weeds Steve?
14 February 2017 at 21:51

Steve Gale said…
No Mick, they are VERY aware about them, and have made 'noises' about looking after them... so far though the signs are not positive from where I'm standing.
15 February 2017 at 07:22

Mick Lacey said…
It's not looking good then is it, if it's not ploughed before Spring your beloved weeds will be past the point of no return. I really am at a loss as to how a botanical society can behave like this.
15 February 2017 at 16:12