February 04, 2017
The humble House Sparrow, once thought of as not really worth the bother of looking at (unless you were James Denis Summers-Smith). Now it is a species that has declined, alarmingly so in some areas. I've been lucky in the part of Banstead where I live, as these characterful birds have hung on, with at least two roosts (of 20-40 birds) within 400m of home. They breed in neighbouring properties and are a frequent visitor to the garden bird bath, as this male from today illustrates. 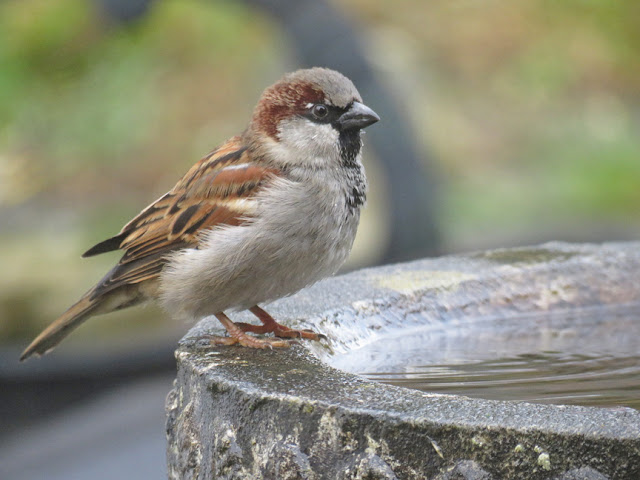 But although I still see them - and in number, each day - my notebooks from down the years does show a decline. Within the ND&B uber patch, my highest counts are of 400 at Beddington SF on 11 July 1980, 200 at Beddington SF on 7 September 1975 and 200 at Seears Park, Cheam on 6 November 1983. These are now at least 30 years old. In recent years my highest counts have come from Canons Farm, with 80 on both 23 August 2014 and 8 September 2016. My highest count anywhere was of 900 at Dungeness on 19 October 1980. These were in the dying days of a roost at the Long Pits that used to gather in late autumn/early winter, and could reach into the low thousands. Now? Maybe a three-figure count in the moat if you're lucky.
Beddington Sewage Farm Dungeness House Sparrow Seears Park

Derek Faulkner said…
Not declining on Sheppey Steve, very common here. You can visit my garden every day of the year and find 30-40 spuggies waiting to be fed. Much as I love them, they empty the sunflower feeders on a daily basis. Had five nests in the garden last year, three in nest boxes and two in the hawthorn hedge and probably totalled seven broods. Most places on Sheppey you will find spuggies, especially around the farms.
5 February 2017 at 06:41

Derek Faulkner said…
It is Steve and I think that they are a much maligned bird. What does pee me off though is the fact despite having a well shrubbed garden, surrounding by other gardens the same and being in rural Sheppey, I never get any finches on the feeders anymore, just spuggies and doves.
5 February 2017 at 10:24

Gibster said…
Still a very common bird on Scillies too, had 120 to seed outside my tent when I was camping there last summer. Plus about 6 or 7 inside it most days...highly prolific crappers are the humble spadges! Over 100 at Old Town Cafe, over 100 at Juliets, over 200 by the shop on Bryher, common in Hugh Town. Folks are definitely doing something right (or rather, not doing something wrong!) on Scilly.
5 February 2017 at 12:12

Gibster said…
Got a gang of about a dozen here at the hotel/cluster of houses at the top end of the village. Mostly loitering around the feeders I recently put up. My boss doesn't know it yet but I plan to put up a load of nest boxes, so may need a reappraisal of their numbers in the autumn.
5 February 2017 at 19:49