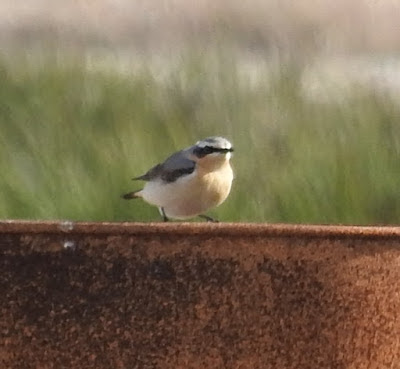 The 2019 ND&B Wheatear Trophy kicked into life yesterday when Paul Trodd, he of Plovers Blog, waded in with an early afternoon posting of a white-arse that had been found on Dungeness beach by DBO assistant warden Jacques Turner-Moss. The competition rules state:

Earliest postingWhoever posts the earliest image of a 2019 UK Northern Wheatear wins this one. Blog posting only.

This is open only to those blogs that clutter grace the 'Worthy Blogs' list to the right of this post. And, as if throwing down a gauntlet to announce his attempt at the main prize, he posted no less than three images. Martin Casemore over at Ploddingbirder also posted an image of the same bird, but several hours later. Hard luck Martin...

Just to recap the other categories:


Numbers champion (the big one!)
Whoever posts the most images of Northern Wheatears between now and the end of April 2019. A photograph of five birds together will count as 5 images! Get snapping!!! No repeat images, and that means you, Peter Alfrey!! Blog posting only.
Best photograph
The best image of a UK Northern Wheatear in 2019 (up until the end of April), to be judged by as yet unannounced members of the BBC's Countryfile team - (likely to change) - will be the winner. Or Matt Baker. Or David Lindo. Possibly Bill Oddie. More likely to be me. It might be used on the 2020 Countryfile calendar - might. Or as a nifty t-shirt design to be worn by Chris Packham during live transmission of BBCs Springwatch - outside chance. And, as the other categories, blog posting only.
Northern Wheatear only. UK only. 2019 only.

Paul has yet to win the 'big one' - can he following the footsteps of these Kings and Queens of White-arse?

I just need to find one anyway - love Wheatears..!

Steve, I feel honoured (sob, sob...)and humbled (sob, sob...)I`m not worthy, it was a team effort (sob, sob...)thanks must go to Jacques for finding it and Martin for relocating it on the rusty oil drum (sob, sob...)and Barney, for just being there! We`ll try and make it a Black-eared next time, but I suppose that won`t count!!! Cheers. all the best.

Patience Arjun, they'll soon be up with us.

You find a Black-eared Paul and I'll hand the big prize straight over!!

I have not even started looking yet!!