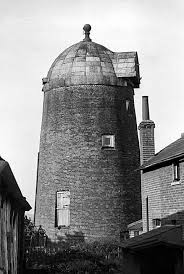 Some time ago I posted about my formative years in Tring, Hertfordshire (1962-70). You can, if you so desire, read that by clicking here. I had reason to reminisce earlier today and a whole tranche of additional 'Tring' memories came flooding back, which I feel the need to commit to 'virtual paper'. Here they are.

We lived in Fantail Lane, a new build cul-de-sac on the edge of this quaint market town, with fields and hedgerows within sight. These early-60s houses had been built on fields, and were overlooked by an old disused windmill, called Goldfield Mill. It was the shape of a stout pepper pot with its sails (and fantail) removed (left). I accepted its presence as much as I did the kerbstones and pavement, but there cannot be many homes that had a sentinel windmill surveying all that we did. It was called Goldfield, which also happened to be the name of the brand new infants school that I went to. Prior to this I attended a red-brick Victorian building that was then demolished, both of which I still have quite clear and fond memories. I liked to think that the new school was so called because the fields on which it was built had once been home to millions of buttercups. With our road being new, most of the incoming owners had young families, so there was a ready made gang of boys to befriend, in our case a gang that amounted to six urchins. We rode bikes along the country lanes, played football, re-enacted 'The Man from Uncle' and Adam West era 'Batman' episodes and, for a brief period of time, took up the dark art of shoplifting (mainly sweets and collectable cards), encouraged by having watched Lionel Bart's 'Oliver' at the cinema. We never got caught and didn't feel any remorse about doing so. So, apart from being a band of Artful Dodger wannabes, we roamed town dressed up as caped crusaders, getting stared at whilst wearing curtains around our necks, balaclavas with ‘ears’ sewn on and having swimming trunks worn over our trousers. Really...

One of our gang had a back garden that adjoined the windmill. The owners of the house attached to the windmill had a large and noisy dog. Anytime we kicked a football over the fence and into the dog's kingdom, one of us needed to hop over and retrieve it. This became a right of passage, and many was the time when the dog almost got to us before we clambered back to safety. Curiosity got the better of us one lazy summer afternoon, and we went round to knock on the door of the house by the windmill, asking if we could look around it. The owner kindly showed us what he could, and his dog, the very same one that we had painted as a man-eater, turned out to be very soft indeed.

Close to the town church was a terrace of old abandoned Victorian houses. It was rumoured to have once been home to several old women who had been burnt at the stake as witches, although the age of the properties and the time of the hunting down of witches did not coincide. That small detail did not deter us from our black magic fantasies at all, and we dared each other to walk up this alleyway at night. You got double-kudos if you actually entered these houses. If the witch’s ghosts wouldn't get you, then, it stood to reason, a murderous tramp would. Close by was another empty building that had once been some kind of office. We often went inside, with the cellar being knee-deep in paper. Mythology had it that giant rats were to be found, although I never saw one.

There was a brewery in the town, Rodwell's, and to us kids we were not so much interested in the beer that they brewed as much as the lemonade they produced. This was delivered to our houses by van, my Mother ordering single bottles of lemonade and cherryade, with, in the summer months, the addition of cream soda. To this was added a brick of vanilla ice cream, one of the few indulgences that I can remember and one of the few times that I ever felt sophisticated as a child. Sunday teas were always tinned salmon and cucumber slices in vinegar, accompanied by the radio blaring out ‘Sing Something Simple’ on the Light Programme. I haven’t heard that song for years, but if I did I would be hurtled back to those drowsy evenings, with a bath full of Matey and the promise of school the following morning.  Away from the town, close to our house, were two shops, built at the same time as the estate we lived on. One was an off-licence, the other a newsagent, where, in 1969 I queued up unsuccessfully to buy a copy of the new football magazine 'Shoot', with its free league table ladders. The newsagent had only ordered one copy, leaving a host of disappointed lads. It still hurts to this day.

I joined the church choir, egged on by a school-teacher who said that I looked angelic and the promise that I would be paid for doing so. We received 6d a service (both Sunday morning and evening) and the princely sum of 2/6d a wedding. I had never felt richer. The church choir had a number of lads of a similar age, and we would muck around in the graveyard before Friday evening choir practice, staring at the witch’s houses and getting told off by the choir master. Inside the church was a statue of a Georgian town worthy, lying propped up on an elbow along a plinth, bewigged head, with a hand pointed to the Gods. It was missing the finger. I would wonder where it had gone.

We indulged in massive games of ‘It’, or tag. The whole town was our arena. Count to 100 and we came, ready or not. Boys are like rodents, they use the same paths, so we were found easily. I was quite quick so had an advantage. This came in useful for playing in the school football team on the right wing. Our school kit was ancient, too big for boys of 8-10 years old and was full of holes. We were laughed at when we played schools from Berkhamstead, looking like refugees. I was banned from playing once because I had slipped out from school to watch an Apollo rocket launch at a fellow pupils house. We didn’t even get 10 yards before we were spotted. So much for our ‘Man from Uncle’ training. This was still the era of free school milk and the ringing of a big brass bell to sound the commencement of play time. I witnessed a young boy get his head split open when a teacher rang the bell into his skull. There was blood in the corridor that day, rather than a pile of vomit covered in wood shavings, which seemed to be a regular occurrence back then.

There was a cinema in Tring which had closed down before we moved there. It was still standing, empty like the witch’s houses. We used to go to the Rex in Berkhamsted, by bus, for our films. I can remember the usual Disney animations, plus Emile and the Detectives, Blackbeard’s Ghost and 2001, which if I’m being honest left our gang slightly bemused as to what we had just watched.

One last memory. There was an electrical shop that had, in its window, the first colour television that any of us had seen. Every time we passed it we would stop and gawp. It was usually showing the test card, but if we were lucky one of the specially made test films would be on. This was the sort of stuff ‘The Jetsons’ had promised us - maybe not flying cars, but a gogglebox with colour pictures. Flying cars would have to wait until 1980...

Such a lovely read.

Yes, a lovely read Steve. Paints a picture of '60s childhood that chimes with my own.

I wonder how many housing estates have been built around redundant windmills. There was one in nearby Croxley Green when I lived in Rickmansworth. How surprised I was to come across it! The countryside must have been peppered with them in times past.

Gav, I bet every local history group has a booklet about them. Something sad about their demise.

Thanks Seamus, hope it isn’t too windy with you!