Putting a face to a name

February 20, 2011
I spent a pleasant morning at Pulborough Brooks RSPB reserve, spending some time wandering over the heathland restoration project, an area of the reserve that most visitors do not visit. In time, this small part of the greensand ridge will become a valuable habitat for many species. I came away with a series of moss and invertabrate images to try and identify at a later date. 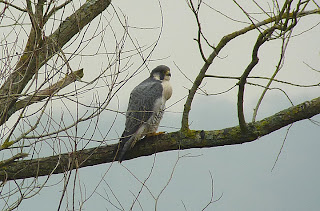 Back on the flood plain I was pleased to bump into Jon Winder, a visitor to this blog who has been kind enough to leave comments from time to time. After a good natter (and armed with some local knowledge for later in the year), I continued to do what I enjoy most - scope an open panorama and count what was before me. Most numerous were Lapwing (1400), Wigeon (850) and Teal (350), with lesser numbers of Shoveler, Pintail and Golden Plover. Six Little Egrets added a splash of exotica to the scene, and I was able to digiscope this Peregrine, sitting in a willow before it dashed across the brooks towards some unsuspecting prey. The reserve is well worth a visit, and forms, together with Greatham and Amberley Wild Brooks, a highly rich area for all sorts of wildlife, particularly plants and birds. Look out for Jon if you do go (identifiable by his RSPB volunteer badge), he's both knowledgable and approachable.
peregrine Pulborough RSPB

Unknown said…
Nice to meet you too Steve and thanks for the kind and flattering comments. Nice picture of the Pulborough Peregine - she's certainly not going hungry today!
20 February 2011 at 19:11