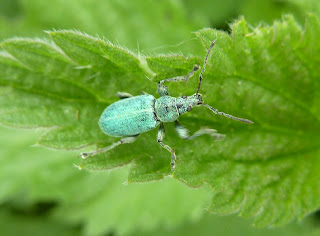 Beddington Sewage Farm once again provided today's entertainment. The promised rain did not materialise, so therefore a diurnal wader and tern passage did not materialise either - apart from the two Barwits that flew through when I had deserted the lakeside and was off doing my botanical survey... I'm getting a reputation as an unlucky birder down at the farm. It seems that whenever I wander off something happens (Bearded Tit, White-fronted Goose and Waxwing have all appeared briefly only to depart before I have returned) - all of them are all good local birds.

All was not lost though, as my assistant botanical recorder, Frankie 'Hoary Cress' Prater showed me a weevil on the nettles. I even keyed it out and feel confident in naming it Phyllobius pomaceus. That's the boy in the photograph above.

The rest of the Beddington Bird Group are taking part in the annual bird race tomorrow, whereas I will be attending a barbeque in Shooter's Hill. My only decision to make (apart from how many sausages to eat) is if I dare to leave my mobile switched on?
at April 29, 2011

Thanks John, it's amazing what's out there and right under our noses...

What key did you use for the weevil Steve?

Hi Josh, I scoured the internet with a general search and, via some circuitous route, ended up on one. I should have bookmarked it, but didn't. I suspect it was copied from the RES key, but I may be wrong.