Books that I urge you to read 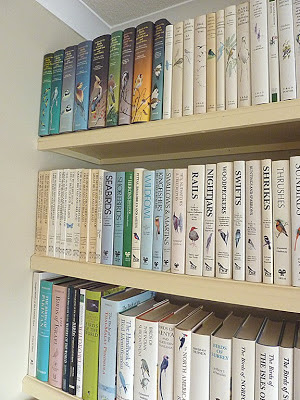 Over the past few years I've recommended a number of books. Most of these have possessed a literary bent and are books that not only inform and entertain the reader but also transport them to the very places that the author is writing about. Each can also skilfully express the spiritual and personal side of observing nature, something that is entirely missing from academic tomes. In no particular order I would strongly urge you to pick up the following:

Waterlog by Roger Deakin. One man's journey around Britain finding wild places in which to swim, be they pond, river, moat or loch. The author is a keen observer of wildlife and with each swim unlocks the inter-connectivity of all around him.

Congo Journey by Redmond O'Hanlon. This is a book that leaves you frightened, soaked in sweat, confused and knackered after reading it. Mr O'Hanlon is an Oxford academic who decides to go in search of a mythical dinosaur that is said to still exist by the pygmy tribes of the Congo. The author frequently betrays his ornithological passion. This is more than a book about looking for wildlife as it is as much about confronting inner fears and meeting head-on the paranoia of a country teetering on the brink of collapse.

Island Years by F Fraser Darling. Just before the outbreak of WW2, one man, his wife/partner and their young son go to live on an uninhabited island off of the west coast of Scotland to study the wildlife. This book was bequeathed to me by a grand lady who was just approaching 100. She knew that I had most probably not read this book (published in 1940) and that I would get something out of it - she was right on both counts. You can smell the sea, taste the salt and have to put your hand to your eyes to shade the sun with each captivating chapter.

Blood Knots by Luke Jennings. I recently urged Gavin Haig to read this book which I'm pleased to say he did so with a positive outcome. A book about fishing? Is that really wildlife? Yes it is, on many levels. As much as it is a memoir of a life spent trying to catch fish it is also a reflection on friendship, death, wild places and much, much more.

The following are titles that I've bigged up recently, but will briefly do so again - all worthy of your time and all guaranteed to enrich your soul: Butterfly Isles by Patrick Barkham (trying to see as many species of the UK's butterflies in a year whilst splitting up with your girlfriend); Running Sky by Tim Dee (simply the most beautifully written book about birdwatching); A Single Swallow by Horatio Clare (Welsh birder decides to follow the migration route of a swallow, overland. from South Africa to Wales but doesn't bargain for his own mental meltdown at the end); Nature Cure by Richard Mabey (author leaves the Chilterns for Norfolk to try and get his life back on track and also rediscover his love for nature); The Jewel Hunter by Chris Gooddie (simply my favourite natural history book ever, the entertaining and awesome account of one mans attempt to see all of the world's pitta species in a calendar year. Does he achieve it? Buy it to find out...)

I must also mention 70 Years of Birdwatching by HG Alexander, the book that started me off and still gets re-read every couple of years; Britain's Rare Flowers by Peter Marren, and Weeds by Richard Mabey.

Finally comes The Big Year by Mark Obmascik. Forget about the goofy film that was recently made with such un-funny 'funny' actors like Jack Black and Owen Wilson pointing fun at such a strange enterprise. This waste of celluloid (or whatever film is saved on nowadays) did not do service to a well-crafted book, written by a journalist, focusing on what made three highly differing men attempt a big year list in North America. I've read this several times already and never tire of it. Could almost be classed as a thriller - or even a study of human behaviour.

Please support book publishers by buying such products or ordering them from your library. If we don't continue to do so we will end up with the diet of bland formulaic pap that can be regularly found in the High Street bookshops near you - if there is a Waterstones there of course - or, in these strange times, even a High Street.
books

Factor said…
I would also like to add a book that will be on sale from the end of April/beginning of May by Jeremy Early, a journalist with a passion for conservation and photography who lives in Reigate, called My Side of the Fence. The Natural History of a Surrey Garden.

It is a book about all the wildlife recorded in his garden, including mammals, birds, butterflies, moths, wasps, bees, flies and other invertebrates. David Bellamy has agreed to write the foreword.

Some of Jeremy's photos show a remarkable insight into nature on our doorstep. (How's that for a bit of a plug!).

Out of your books mentioned I equally enjoyed The Running Sky, Butterfly Isles and The Big Year. I didn't care much for the Mabey books as he doesn't work for me.

Waterlog is on my list as even though I have not yet read any of his books, I like Roger Deakin by way of Robert MacFarlane who wrote well of him as a close friend until his death.

Steve Gale said…
Neil - I'll keep a look out for it.