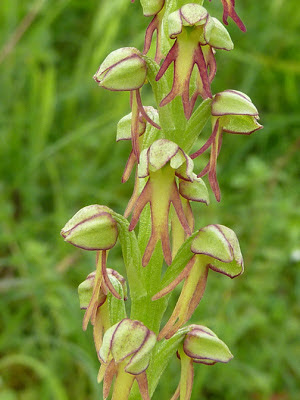 I'm guilty of taking Man Orchids for granted. In 'my' part of Surrey they aren't exactly common, but there are quite a few places that you can go to and expect to see them at the right time of year.

Today saw me visiting one such place, a small meadow not far from Box Hill. I could only find the one, but that was good enough. The number of Common Spotted Orchids here was low and Fragrant Orchids were only just starting to show themselves.

An hour later found me on the other side of Box Hill where I came across 39 more spikes of Man Orchid in a place that I hadn't recorded them before. This site had moderate numbers of Common Spotted and Fragrant Orchids - Common Twayblades were in fine number across the greater Box Hill area. 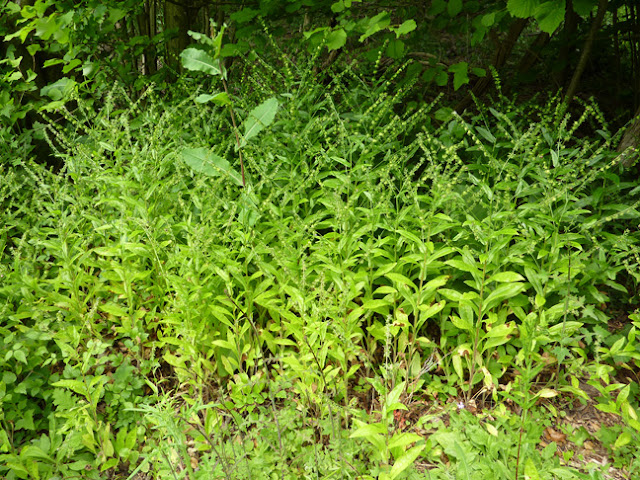 The wall of green above may not look all that inspiring, but it's a national rarity - Green Hound's-tongue. I found between 800 and a thousand plants along a 40m section of footpath at the base of the southern scarp between Box Hill and Brockham Quarry. It looked as if this area had been cleared several years ago. Most of it was over, with the odd flower still to be seen. I was able to look at the rim-less nutlets (those of Hound's-tongue have an obvious thickened rim). I've never seen such a large colony. There were plants disappearing into the wood behind, so an accurate count would be worthwhile. Maybe I should have stayed and done just that...
Box Hill Brockham Green Hound's-tongue Man Orchid

Andrew Cunningham said…
Those Man Orchids are stirring an irrational desire to travel some distance.
17 June 2013 at 21:09