Confessions of a tweeter 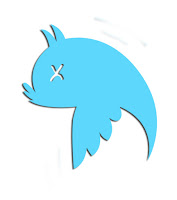 I have a love/hate relationship with Twitter. For those of you who are unsure as to what Twitter is, it is an online social networking and microblogging service that allows users to post 'tweets' (messages) that are allowed to contain no more than 140 characters.

I was an early user of this service as, working with journalists as I do, a number of my colleagues adopted it as a means of gleaning information. Further down the line they realised that they could use it to spread their work to a larger audience. I, on the other hand, found out that I could gather natural history information.

It was not until last autumn that I came to the conclusion that I needed to take it far more seriously, as a large number of local birders were sending out any 'scarce bird alerts' by tweeting rather than texting, which had until then been the prefered means of information dissemination (that sounds very media savvy, doesn't it). Without Twitter I was finding myself out of the loop.

So I bit the bullet and set up a new account, promptly following a couple of hundred other accounts (mainly south-east birders, rare bird information groups and national natural history bodies). Once you follow an account, everything that they tweet comes to you. Some people are manic tweeters. They can tweet 50 times a day, and not just about birds. You have to wade through their thoughts on every subject under the sun just to get to the tweet that you followed them for in the first place - "Little Stint still at Beddington" - or something along those lines.

This had two affects on me. Firstly I was checking my Twitter feed too many times a day that was healthy to do so. I became, very quickly, a Twitter junkie. Secondly it increasingly annoyed me. One of the problems with following someone is that, especially if you follow their own followers (which you tend to do if they are birders), you end up reading their conversations several times a day that can be as tedious as:

"Just off to Staines Res"

"Thanks, are you coming over later?"

"No, thought I'd try for Nightjars"

You get the picture - in-jokes, drivvel, just the sort of thing to spark off my puritanical hatred for all this sort of guff.

After several months I'd had enough and deleted my account. But, of course, I was then no longer in 'the know' and after only a few days realised that there was a very useful side to Twitter after all. My answer was to create another, but anonymous account and follow just the most useful people, those that put out good information with the minimal amount of trite waffle. I also wanted to have a bit of fun, so created 'Birding Eye'...

This alter ego allowed me to send out controversial statements, jokes, satirical takes on current birding events and gathered quite a following. Local birders were trying to guess who it was (although I was rumbled by the Canons Farm crew). I hadn't enjoyed myself so much for ages. But after maybe six weeks the 'joke' had worn thin so I deleted that as well (just before the libel lawyers caught up with me).

Do I have a current Twitter account? Yes. I anonymously follow just a few selected people and hardly tweet at all. I use it to gather mainly local information, but also to keep abreast of the national rare bird news. I have managed to keep my checking of tweets down to half a dozen times a day. It's all under control.
at August 07, 2013

I find mixed use for Twitter. What some people tweet can be a bit tiresome but people probably find a lot of what I tweet the same so it's a fair tradeoff. I'm a bit OCD about reading every tweet no matter how trivial and clicking on all of the picture links, and most of the weblinks.

Anyway, don't worry Steve I've had the identity of your new account sussed out for a little while... :-)

I need to get my Canons Farm info from somewhere David...