From rarity to commonplace 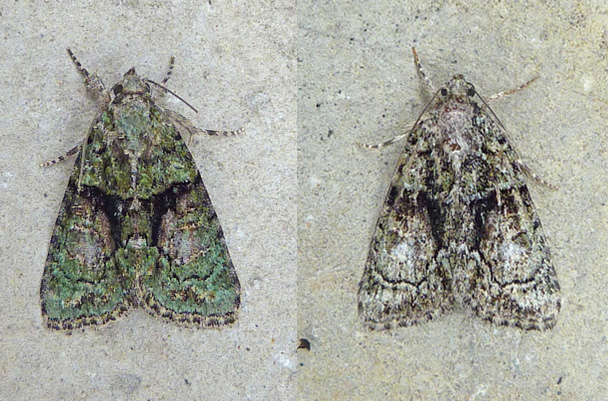 When I purchased the first edition in Skinner in 1986, it did not include Tree-lichen Beauty. I was blissfully unaware that this species even existed until a few individuals started to appear on the south coast in the very early 1990s. By the time that the British Wildlife Moths Guide was published in 2003, there had been at least 40 individuals recorded.

Fast forward 10 years and Tree-lichen Beauty has established itself along the Kent coast; parts of the Sussex, Essex and Suffolk coasts; and the London area. My back garden can be included in the latter. My first only appeared in 2011, to be followed by seven more up until the end of 2012. This morning I had four come to the MV. It is clearly established in the Banstead area. There was quite a bit of variation with the four trapped - the image above is of the two extremes. This species feeds on lichens found on trees, so there seems no reason for it not to spread further. The latest distribution maps do show some outlying dots on the north Norfolk coast, Devon, Dorset and the east Midlands, so lepidopterists beyond the core sites should be on the lookout.

This species, along with Small Ranunculus, Jersey Tiger, Toadflax Brocade and Cypress Carpet, demonstrate the dynamic changes in distribution that some 'southern' moths are undergoing. There will be more to come I'm sure, which will go some way to balance the losses. For example, when I started looking at moths, The V-moth was something that I half expected to come across. I never did, but assumed that, one day, it would happen. I'm still waiting - and looking at the latest distribution maps it may be some time (if ever) before I do.
at August 10, 2013

Still waiting for four of the five you mention up here in Leics. - I'm gonna be so peeved when Tree-lichen Beauty and Toadflax Brocade turn up in someone elses trap first.

They'll get there Skev and if they've got any sense will head straight for your trap...