What can I say about my birding autumn other than it was very hard work. The Priest Hill experiment carried on with almost daily visits between late July and the end of September, but then fizzled out owing to my enthusiasm being drained by the paucity of migrants - two fly over Little Egrets, two Tree Pipits, and single Wheatear and Whinchat were poor return for such effort. No Yellow Wagtails, few warblers, it really was a struggle. Mid-September saw me return to Canons Farm and be instantly rewarded with good numbers of chats, plus both Pied and Spotted Flycatchers. And then there was an unforgettable day in which 10,000 mixed hirundines streamed through - maybe the old place was trying to tell me something...

I even partook in a most uncharacteristic ornithological act, that of twitching a bird at Beddington! There were mock faintings from the birders present when I wandered on site to take in the splendid adult Sabine's Gull, and much was made of the fact that the last time I visited was four years previously to twitch a Gannet. It was wonderful to not just see the bird, but the cast of characters that make up the regular birders who still diligently cover the sewage farm.

And now we come to my late autumn stay at Dungeness Bird Observatory. In keeping with much of the eastern side of mainland Britain, it was poor. Few falls, few arrivals, few scarce birds, no rarities. Apart from a couple of days of heavy Goldfinch movement, not much was on the move. Highlights were thin on the ground but included single Hawfinch, Snow Bunting and Lapland Bunting. That's two poor autumn stays for me at DBO in succession. 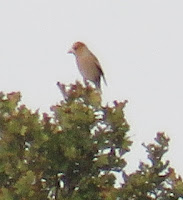 But the autumn did have a saving grace - Hawfinches!! By mid-October it was fast becoming obvious that something strange was going on, with unusual numbers of these big-billed finches being recorded across the country, mostly in central and southern England with odd birds popping up on far-flung islands (including large numbers on the Isles of Scilly). Surrey was getting in on the act and I was able to find my own birds early on at Juniper Bottom, Banstead and Headley Heath. The latter site became a stop-over for many birders, as up to 35 birds could be found in the western most valleys, affording half-decent views to those who were patient. They are still present in mid-December. The Banstead birds were my highlight - I had spent a couple of mornings skywatching from the back garden in the hope that species would fly over, and on the third day they duly did so. A four hour session produced a flock of four and a single, all heading east and uttering the thin 'sip' call. It was entertaining to read all of the tweets, blogs and texts from the many birders who were able to take advantage of this invasion to add the species to their life list, patch list, county list - whatever list it may have been. For many it was the first time of being able to regularly observe Hawfinches, to study their behaviour and listen to their calls. I enjoyed walking out of the front door knowing that I would see them. Each birding year brings such unexpected highlights. When they happen you need to go out and experience them.

This has been my 44th year of birding. During that time my birdwatching focus has rarely stayed the same - a bit of twitching here, a bit of year-listing there, some UK wide wandering - but as each year passes I find myself far more interested in staying local. Part of it is not wanting to spend time sat in a car, but it is also a case of searching for that thrill to be had from finding your own birds on your doorstep. Admittedly they will rarely compare in number or notability with what I would find if I went down to the coast, but that largely misses the point.

"Part of it is not wanting to spend time sat in a car, but it is also a case of searching for that thrill to be had from finding your own birds on your doorstep." Today Steve I couldn't agree more, for I've finally found my first patch white-winger, a 1w Iceland Gull in the gull flock at the beach. Taken me a whole year and a fortnight, but so utterly worth those innumerable blank scans!

Really pleased for you Seth - I remember your early Uig posts being white-winger fixated!

Cannot get enough of them Simon