The three stages of the New Inn 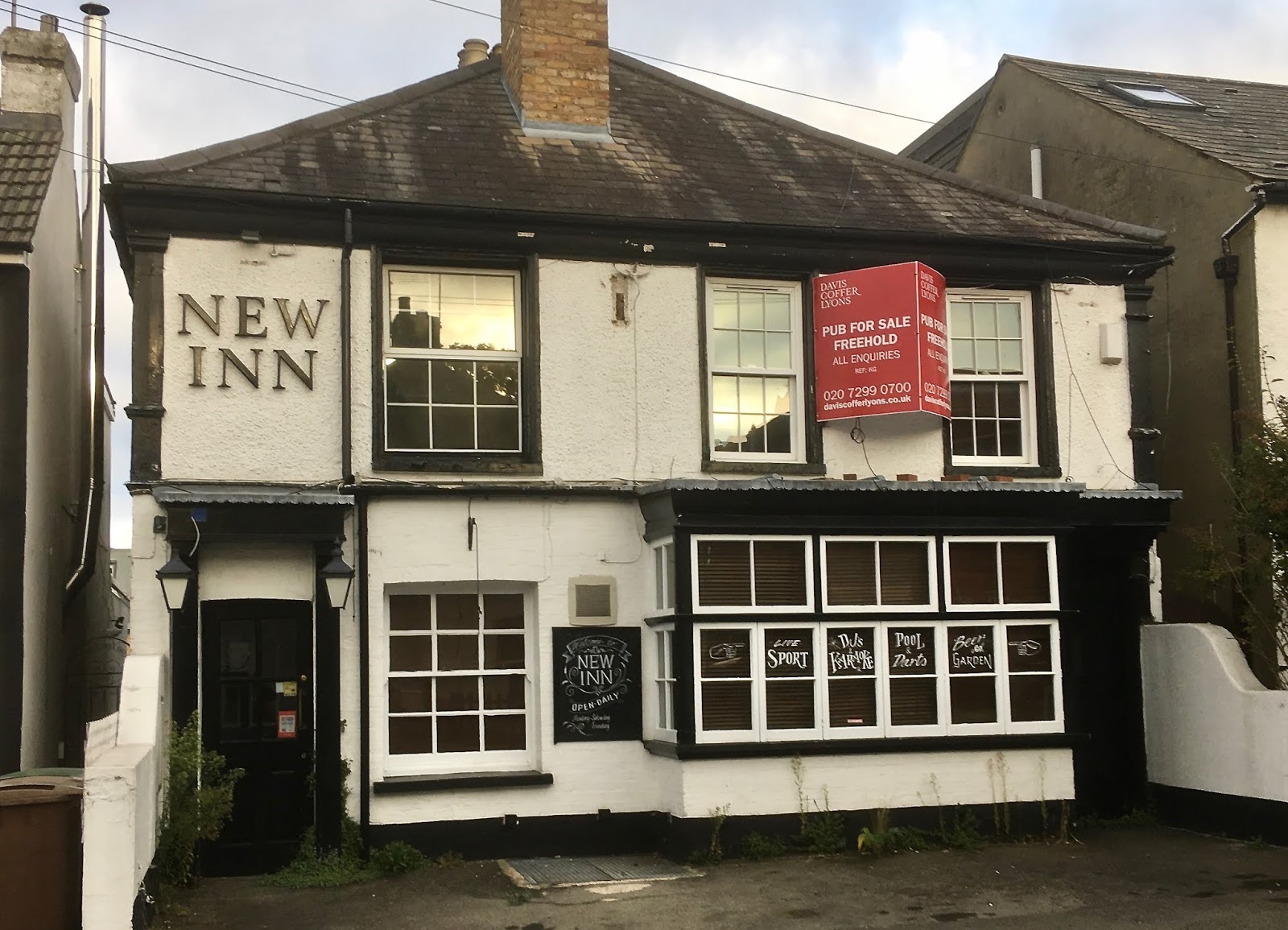 I happened to be in Sutton last week and went on a bit of a nostalgic wander - I had lived in the town during the early 1970s and worked there (employed by Reed Elsevier in its many incarnations) for more years than I care to admit. The back streets, east of the High Street, were home not just to my schooling, but also my early drinking. As I walked down the Victorian-era, largely terraced Myrtle Road, I came upon the pub that had witnessed three stages of that drinking life - The New Inn. I was saddened to find that it had closed down and was up for sale. In today's financial climate it would seem more than likely that it will never again open up as a public house...

Back in 1980 I was introduced to this den of iniquity by Dave Eland. He had adopted it as a local, and with the both of us unattached at the time, we became regular habitués. It was a lively place, with a cast of characters and a feeling of belonging. I maybe visited one-two times a week. They put on live music in a tiny back bar, with the other two bars not being that much larger. It gave the place a cosy, compact ambiance. That was stage one.

Stage two came about because of Dave and I being birders. Other local birding friends started to join us. Stewart Holdsworth, Steve Broyd, Bob Hibbert, Nick Gardner, Richard Bosanquet and Andy Merritt all regularly attended what became known as 'Birder Thursday Nights'. We were also joined by a cast of irregulars, mostly non-local birders who dropped in for a beer and a chance to catch up with the latest gossip. Our group included a few 'world listers' who would swap stories and information about birding in Venezuela or Thailand, spreading maps across tables with checklists vying alongside pint glasses for room on the bar. Others would proudly show off the latest publications, be they the most recent BB or a prized birding book. Trips were hatched. Plans were made. At times there were 10-15 of us gathered, taking over a bar. The locals looked on bemused but tolerated this influx of 'weirdos'. On one occasion an American birder walked into the bar and asked the landlord where the 'Birdwatching Group' met. He was on a business trip from the States and staying in London. As a keen birder he had done his homework and had found out about our weekly get-togethers. He was, of course, welcomed to our table(s). A veritable 'who's who' of London birders passed through those pub doors over the years, such as Peter Clement, Alan Greensmith and Mark Hollingworth. But all good things end -  people moved house or moved on, and although a few of us did still regularly meet, our venue became pubs in a couple of miles away in Cheam Village.

However, I still worked in Sutton, in the 'media'. During the late 1980s and early 1990s it was still an arena in which people 'worked hard' and 'played hard'. Our playing hard took place in the New Inn, courtesy of my affiliation with the establishment. For a handful of years it became the bolt-hole from work, a lunchtime refuge - I would arrive with a gaggle of colleagues and do what work-mates did in those lax times. It doesn't happen now, but back then it was quite normal practice to do so. Times and attitudes changed. Very soon any form of lunchtime socialising, particularly any involving alcohol was frowned upon. A sandwich at the desk became the norm. Stage three of my New Inn time had ceased to be.

It was quite sad to come across the old place all shut-up, empty, bereft of life. I stood there for a few minutes, imagining our merry bands walking through the front door and into the cheery atmosphere (although the door we went through was the one on the right, not the left!). But our ghosts are still inside, getting a round in whilst discussing the latest rarity...
birding New Inn pubs

Derek Faulkner said…
That was an enjoyable read and very nostalgic. Here on Sheppey the majority of our favourite/historical watering holes have all closed and some that have survived are not in a very good state.
8 October 2018 at 18:46

Steve Gale said…
Younger generations do not adhere to a pub culture Derek. It is on its way out. Just a few city bars and country gastro pubs will be left.
8 October 2018 at 19:45