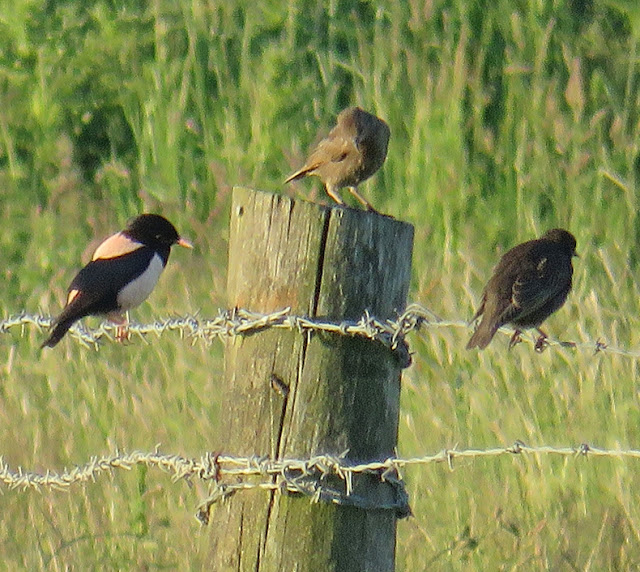 Gavin over at the excellent ‘Not Quite Scilly’ has just posted about the use of bird names. I would have ordinarily commented about this on his blog, but I have a reoccurring problem with Blogger in not being able to leave comments, so thought that I would reply with a post of my own. And expand a bit...

Gav has used, as his main example of alternative bird names, that of Thrush Nightingale and Sprosser, both out there as identifiers of Luscinia luscinia, He uses several more examples, primarily of abbreviation, such as Lesser Spotted Woodpecker becoming Lesser Spot. Although he finds most of these acceptable to use he quite rightly observes that to some birders they are anathema. He’s not wrong there! Where do I stand on this? I’m glad he (sort of) asked.

Spot Fly, LRP, Pom Skua - all these abbreviations are good for me. The ornithological equivalents of ‘don’t’, ‘shouldn’t’ and ‘thanks’, particularly when writing them down in a notebook. But when the bastardisation of bird names becomes more than that, it gets my goat. Want some examples?

No, no and no again. Yes, I know it takes longer to write down, or say, Rose-coloured Starling, Common Rosefinch and Richard’s Pipit, but those shortened names confer a matey familiarity and knowing intimacy that just makes my skin crawl. I don’t know why, it just does. Is it that I detect a lack of respect in their use or the reducing of a bird’s name into a mundane sound bite? Maybe. I’m quite calm with the use of the quaint ‘Rosy Pastor’ for Rose-coloured Starling, but you can go and do one if you want to tell me about the ‘Pink Stink’ that you’ve just seen.

Doe’s it really matter? Of course not. But the evolution of our language, it’s nuances and the adoption of new names and descriptions are certainly worth discussing. And that has been going on for centuries!

Just thought of another. PG Tips, for Pallas’s Grasshopper Warbler. I even know the birder who first came up with the (admittedly) clever nickname, based on the white tail tips. I’ve heard birders spout on about ‘PG Tips’ with the familiarity of an old friend, and most of them haven’t even seen one before.

The one I hate (probably unfairly so as they are great birds) is 'Ultimate Sprite' for Pallas's Warbler!

I remember trying (and failing) to introduce the phrase "Why-bee-warb" for a performing Yellow-browed Warbler and arguing it was just as legitimate as the "RB Flicker" we'd just been watching, if not more so. I have an irrational hatred of "Caspo" - it just sounds so bloody stupid! Fudge Duck too.

Ah lads, you are dumping great big logs onto an already burning bonfire of repulsion! You have all added names that stick in my craw, particularly Sprite, Arctic Roll and - in particular - Fudge Duck. FRIGGING FUDGE DUCK!! AAARGHHHHH.....

Good lord, I had no idea such arguments existed!

I am enraged. I have posted this before. People, usually those with less than 10 minutes birding experience, refer to Grotfinches and Pink stinks to try and prove they are SO familiar with them they can give them a nickname. After they've seen one. Cheeky twats should show some respect to the sentient beings they are watching, a tiny scrap of feathered wonderment reduced to a slang shite nickname! They are truly pathetic.
Abreviations such as Lesser spot are another thing, they are just abbbrevs thats all, no disrespect intended, but the rest... grrrrrrr!

Well said Stewart. I do believe I remember a Boulmer Birder rant on this sort of thing now you mention it. Before that kind old boy Stewchat came along. Nothing is original in Blogland....