I had the birding-bit between my teeth this morning and was standing on Box Hill shortly after dawn. The weather forecast from the previous evening had intimated that this part of Surrey might get clipped by the odd, short, wintery shower. The large bank of low cloud that I could see quickly arriving from the west suggested a bit more than just a few minutes of sleet, and so it proved...

I huddled underneath a Yew tree that was able to still afford me good panoramic views, but these views waxed and waned, as did the snow fall. I stuck it out for 90 minutes, but the sky to the west remained resolutely hidden behind a low, grey, snow-filled murk. Tail between my legs, I trudged back to the car. Steve 0 Birding fail 1.
The sun came out late morning, the snow did one, and even if the air temperature was still decidedly chilly, it felt spring-like once again. Even though I had promised myself not to get too hopeful about the local birding, I couldn't help myself - so up onto Epsom Downs I went, with a particular hedgerow in mind. 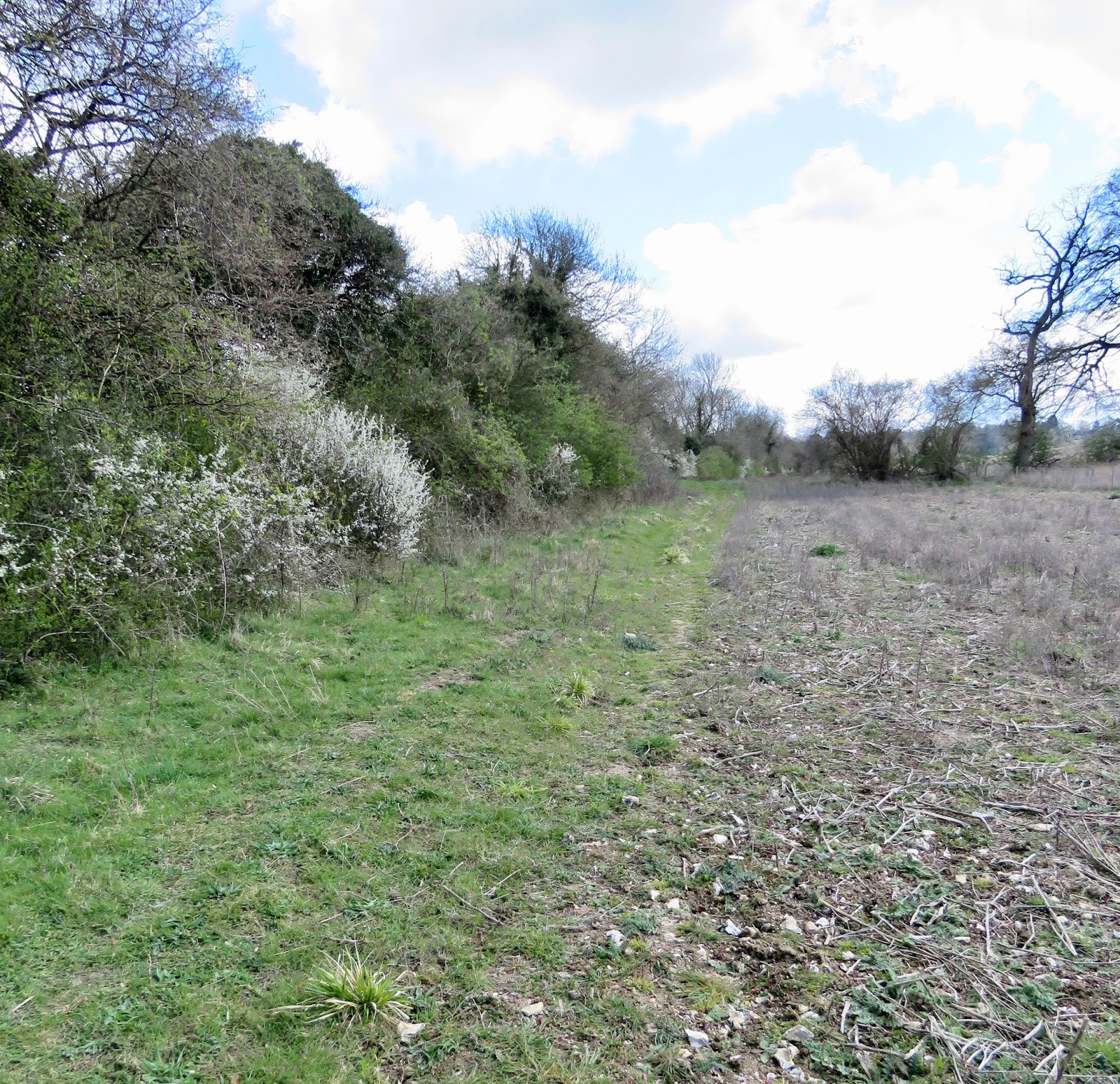 This hedge (on the left) snakes along a modest valley, between open ground on either side. It is very old, with a large suite of species, and it boasts a great depth. I first came across it during the winter, as it is in an area only recently opened up to the public (although I have yet to see anybody here). I took a very slow walk along its whole length - which must be close to half a mile - and found just ONE migrant. A Blackcap. In fact, I might as well spill the beans and admit to only seeing a handful of passerines in total (Robin, Blue Tit, Great Tit, Dunnock). I was hoping for a Common Redstart at least. Steve 0 Birding fail 2.
I then checked a number of open, stony fields that look perfect for Wheatears (at the very least) and Stone Curlews (in my fevered dreams). I found neither. Steve 0 Birding fail 3. So, a day that promised much - at least in my mind - and delivered little. A trip to the coast cannot come soon enough.
Box Hill Epsom Downs snow

Ric said…
Best laid plans, but in this finding, observing and recording game there's nothing one can actually do to influence a result. It's just looking and hoping that there's something there to be looked at. You're at the mercy of chance and a following wind.
It's not like a sport where you can train or practise to be better at it.
12 April 2021 at 18:56

Tim Saunders said…
Well done for being there... Like not buying a lottery ticket you are guaranteed to see nothing staying indoors.
If I were a migrant battling the north wind I would turn round and go back where I came from. Anyway I'm looking forward to a trip to Seven Sisters tomorrow, so hope springs eternal!
12 April 2021 at 21:57

Derek Faulkner said…
It's that much better here on Sheppey Steve and we're on the coast. 3-4 Swallows, a couple of Wheatears and a Sedge Warbler, it's all quite pitiful.
One day these ENE winds will cease and stuff might start to move .
13 April 2021 at 19:09