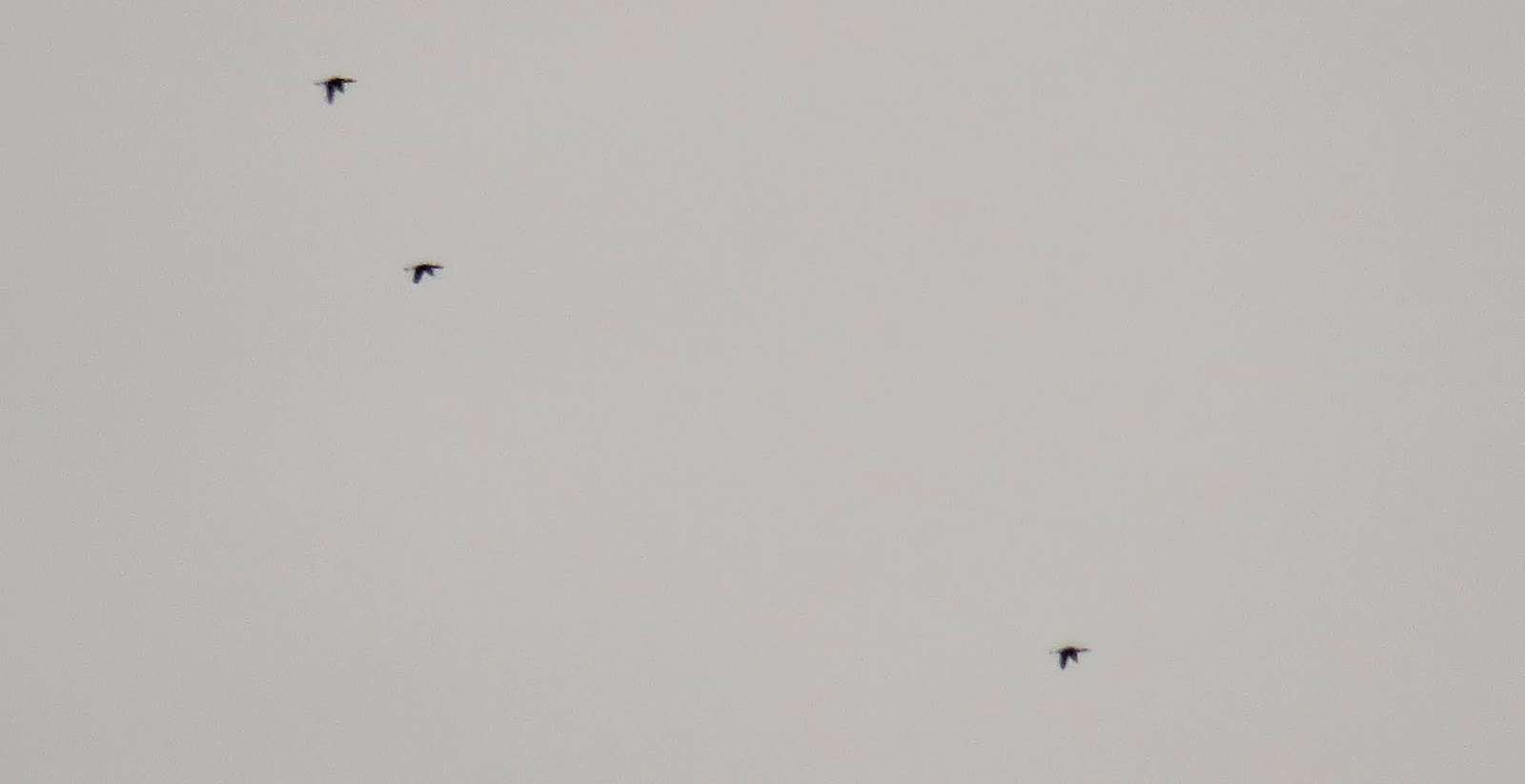 As I have already mentioned in the last post, on the morning of November 11th, while recording a strong movement of Chaffinches over Porth (just outside Newquay) in Cornwall, I observed five Great Northern Divers, seemingly flying on a similar line along with the finches. I think it is worth elaborating on these birds and try and understand what they were up to. I was looking almost due north, along a cliff-line that runs down from Trevose Head until it meets Porth (on a NNE-SSW axis), where the coast suddenly kinks away and heads WSW. Not quite a 90 degree turn, but abrupt all the same.

The first bird appeared at approximately 09.00hrs, and was picked up coming in off of the sea, at a fair height. Obviously a heavy Diver, scope views were able to confirm it as a Great Northern. I was somewhat surprised when the bird carried on with its S or even SE bearing, shunning the coast and heading inland, gaining height as it did so. I was quite excited by this. My pulse quickened even further when at 09.11hrs a group of four more divers appeared, higher than the first, on a similar bearing. These appeared to have been flying down the cliff line from the north, but when reaching the kink in the coast carried on inland, gaining height, veering off to the S. I was able to pick them up in the scope and also take a record shot of three of the birds, confirming them as, once again, Great Northern.

Now, what were they up to? There is a possibility that once past me, and out of my view, they swung west. But why gain height when hitting land and head in a purposeful, inland, direction? If you look at a map of Cornwall, and plot the Divers flight from Porth (if they continued on this line), it heads straight to the Fal Estuary. The distance between Porth and Falmouth is 17.8 miles (as the Great Northern Diver flies). That isn't a great distance for a bird that is likely to have flown all the way from Iceland to winter on our shores (and maybe a little further south). The peak arrival time of our wintering Great Northern Divers is during October and November. I'd love to think that I had witnessed these birds take a short cut, across country, to take up their winter residency along the south coast of Cornwall or Devon. Whatever they were doing, it made my day. 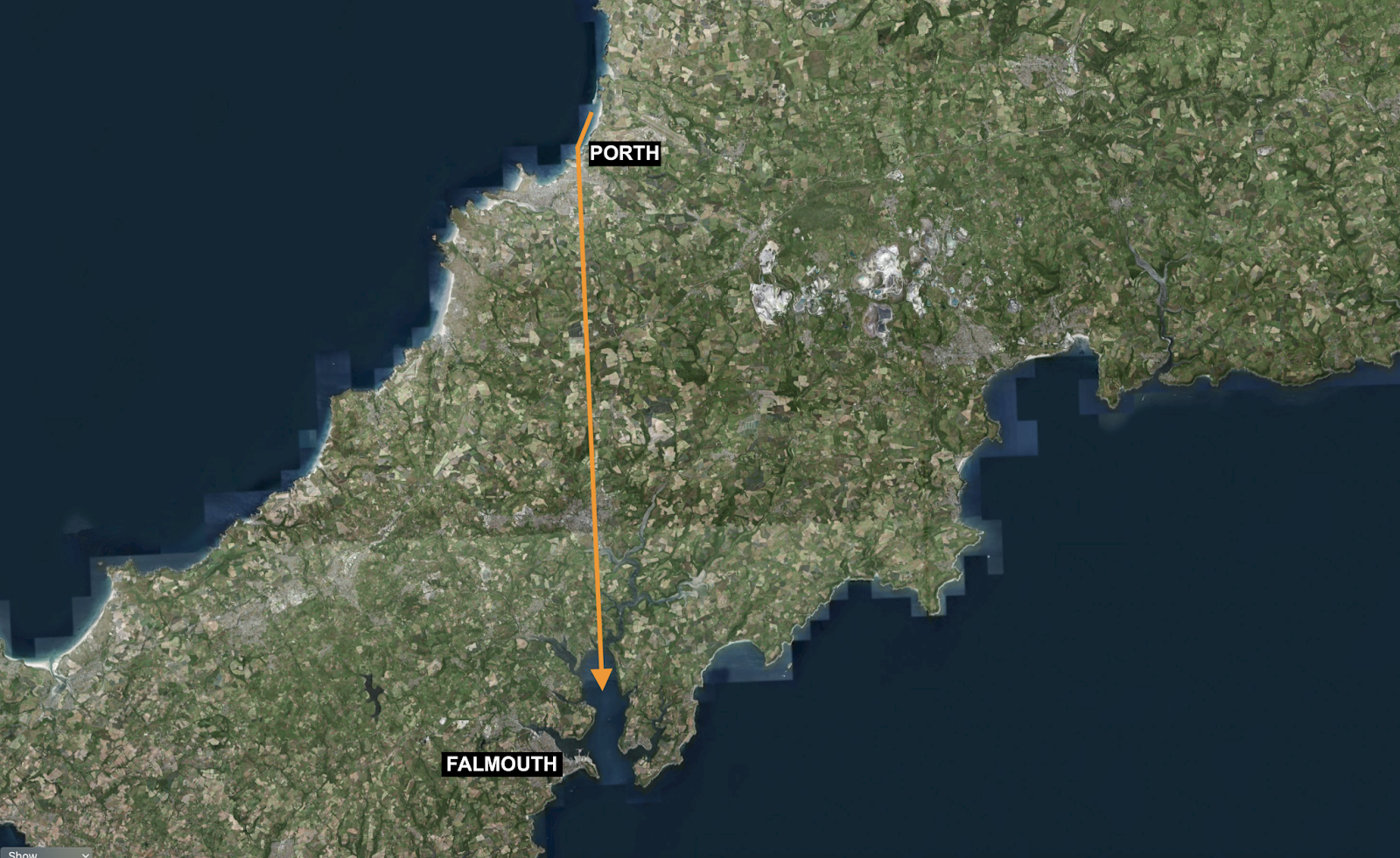 Gibster said…
I love this, Steve! There are a couple of Great Northern Divers in the bay here on Skye at the moment and though I've never seen one cut 'cross country', I've certainly seen low-flying Curlews, Wigeon, Sea Eagles and a Bonxie heading directly inland (east) from the shore here. In a straight line it's just 12km to the east coast of the Trotternish Peninsular, though the Trotternish Ridge and 2000ft tall Ben Edra would kill the line of sight at a low level. The Bonxie was hugging the hillside at about 15ft height, presumably it had taken the overland shortcut beforehand. To fly around the coastline would be best part of ten times that distance. Question is, how do they figure out these shortcuts in the first place? What senses aid them that we don't yet understand?
22 November 2021 at 23:03

Steve Gale said…
I found the whole experience fascinating Seth, and really intrigued me. It is possible that narrow areas of landmass (like Cornwall) see divers head across it quite frequently. Waders and wildfowl in particular take much longer short-cuts (Wash - Severn Estuary for example) and others beside. I hadn’t thought of divers as short-cutters.
23 November 2021 at 07:51

Unknown said…
Hi Steve
Interesting observation. Presumably at a height they are able to see the English Channel.
Was it good visibility? For smaller waterbirds I guess there are predator dangers but not a Great Northern Diver. Might be worth investigating if anyone else has seen the phenomena.

Unknown said…
Hi Steve
I've calculated that given good visibility and assuming no high obstacles in view
to see Falmouth at 17.8 miles the divers only need to climb to 62meters or about 190feet.

Similar I think to the cross-land passage of Pomarine Skuas. Years ago I was at Queensferry on the forth west of Edinburgh. A local birder told me the arctics would turn back at the bridge but the Poms kept going. Then a few years later a birder in Northern Ireland told me that they get Poms on easterly winds and the suspected a cross-land route. And now of course we have the regular passage up the Solway, and presumably on over land.

As various have said above. I think with decent visibility a bit of height allows birds to see a long way.
23 November 2021 at 13:13

Stewart said…
Yes I think you'll be right Steve. They arent shy of land crossings. Ive seen one here once lift up off the sea and fly west straight inland until out of sight. No idea why when it is already on the sea here, but there must have been some reason for it...
23 November 2021 at 14:33

Steve Gale said…
Bob, thanks for that calculation. It was a cloudy, calm day, with decent visibility.

Dipper, although I have seen other ‘water’ species come in off the sea before and head inland, divers doing so was a first for me.

Stewart, maybe it is a regular thing, but I’ve not heard many birders report divers head off inland (at least not groups).
23 November 2021 at 14:51

Skev said…
Here in Leics & Rutland we clearly can't see Divers etc flying off inland from the sea. However we have several large reservoirs here. GND in particular (much more than RTD & BTD) are annual with multiple birds at Rutland Water almost expected these days in the winter months. They can only get here one way; likely that the incidence of inland movements is high, the observation of it much less so. Perhaps more move at night.
23 November 2021 at 22:04

Steve Gale said…
Hi Skev, you sum it up in a nutshell - of course they move regularly overland, it is just the observation of it is not so frequently seen. Hope you are recovering well still.
23 November 2021 at 22:17