Last week, the Surrey Bird Club sightings section on the website announced that 100+ Bramblings had been seen along Clifton's Lane, just off the A25, between Reigate Heath and the North Downs scarp slope - it is an area that I know well and bird a few times each year. There was no need for me to weigh up the pros and cons of paying a visit - it is a place I love to wander and a species that I particularly enjoy watching.

Friday afternoon saw me saunter up the aforementioned lane, looking out for a 'field with crops' that the birds had been frequenting. The first that fitted that description, beyond the railway bridge, was a right old mixture of brassica, peas and arable 'weeds' (below). There were no birds within the field, but the trees that lined the western side were full of them, hundreds of finches perched on the bare tops. I was able to get a decent viewpoint and could count 400+, many of them Brambling! I could not fail to be aware that more birds were in the copses around them. I got underneath some of the trees that the birds were favouring, and could see a few hundred more - this was very interesting indeed. A good proportion of them moved further up the lane (which becomes a muddy footpath) so I followed. It was here that a set-aside field, resplendent with game cover strips, provided one of those spine-tingling moments that we are sometimes lucky to experience when birding, as a blizzard of birds burst from the vegetation and alighted in the adjacent trees, before once more falling back into the crop. Hundreds of Brambling and Chaffinches, a maelstrom of wing bars and white rumps. On one of the sorties up into the trees, I was mesmerised by at least 350 Brambling perched above me. The light might have been bad, but the orange breasts and white bellies and vents shone out like some tardy Christmas decorations left out on a festive tree beyond Twelfth Night. I reckoned on 550 Brambling, 450 Chaffinch and 125 Linnets as an absolute minimum. Gordon Hay visited the following day, seeing closer to 2000 mixed finches. I needed to go back and try to find out just how many birds were present, and it what species proportion. 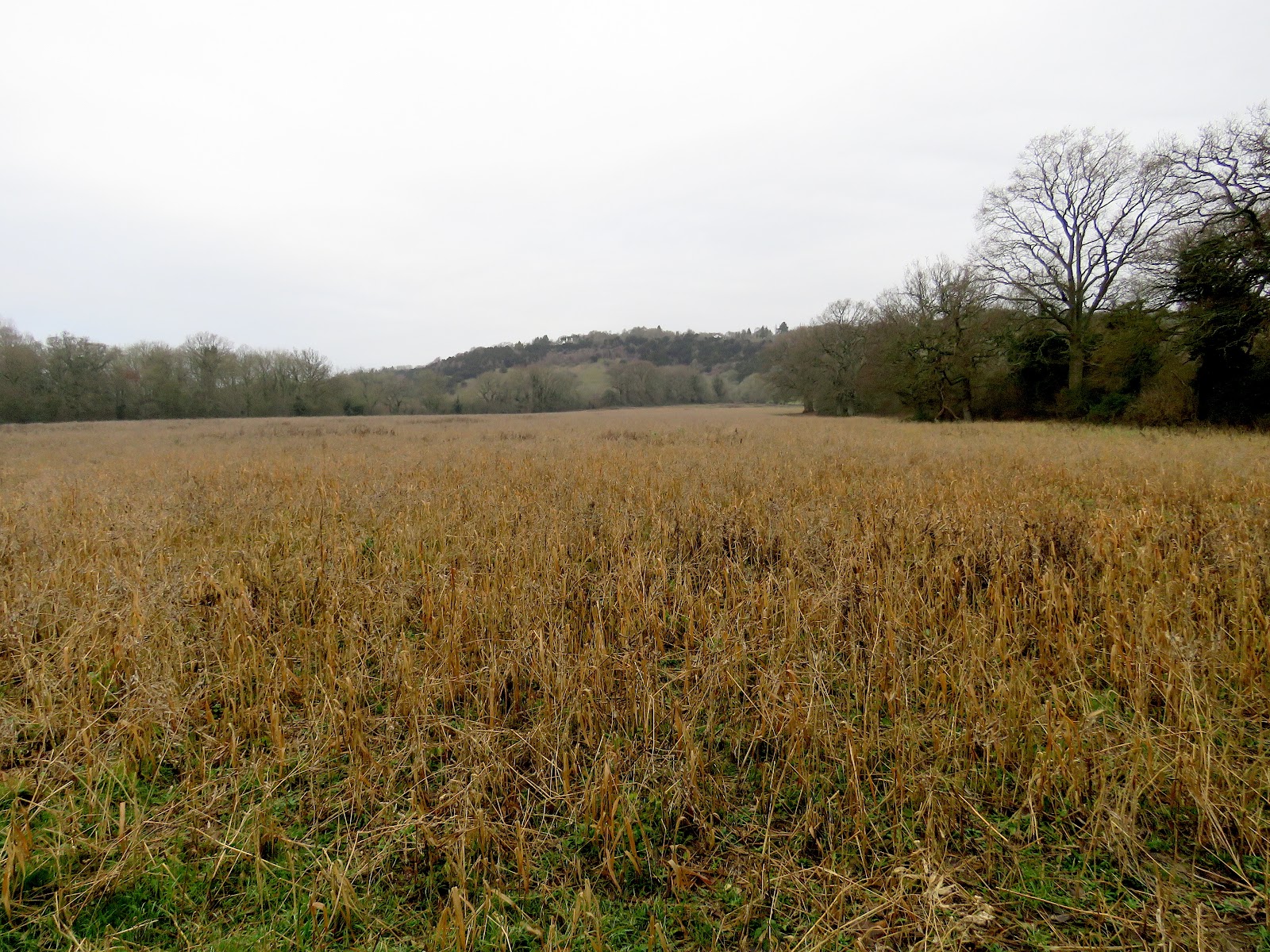 At first light this morning I was up on the scarp slope, looking down on the set-aside field. Small numbers of finches started to arrive from all points of the compass and settled down in the general area. After an hour I walked back up Clifton's Lane, but was disappointed to find few birds. Looking across the original field (pictured above) it became obvious that quite a few finches were feeding along and underneath a tree-line bordering some distant gardens, over towards Colley Lane. After a fruitless half-hour walking up and down this lane, I then went back and tucked myself in behind a tree along the edge of the original field, and waited to see what would happen - would the birds revert to their previous behaviour and come back towards Clifton's Lane? Oh yes they did...

It started with 400+ alighting on tree tops, then slowly making their way northwards along the canopy until launching out across the field. They were then followed by more, and more... and more. All casually done, unhurried and spaced out. A few 100+ flocks but mainly a dribble that went on for 20 minutes. I was able to make an accurate assessment of numbers (1,750 birds) and attempt a species breakdown (1,100 Brambling, 500 Chaffinch, 150 Linnet and a handful of Goldfinch). From time to time a clot of birds (up to 500) would break away and fall down into the field, hardly settling, making a few circular sorties just above the vegetation before once again alighting in the trees. 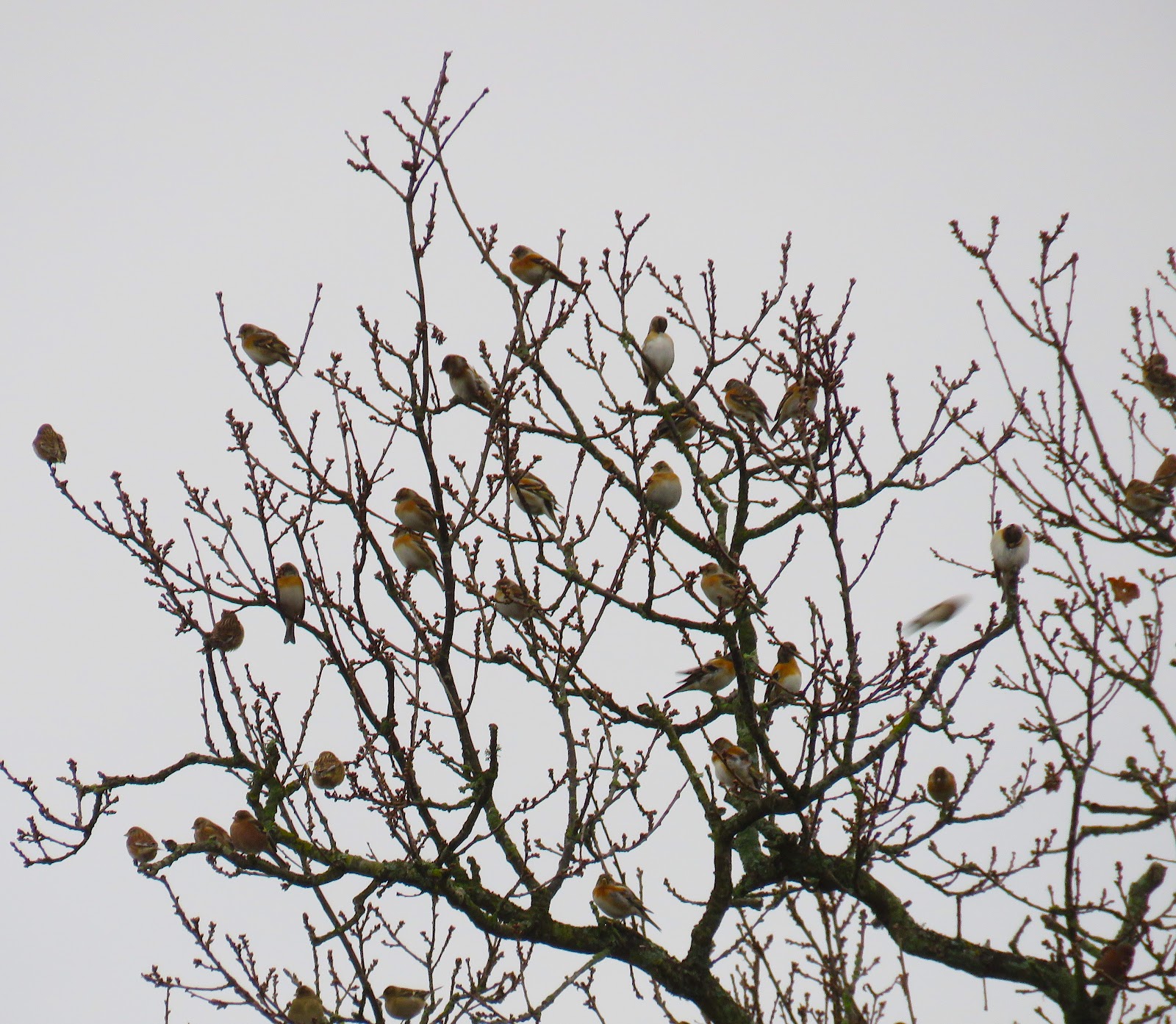 After checking some nearby farmland, I returned about 13.00hrs. All seemed quiet. Then, just as happened this morning, the birds started to make a slow, and considerately close, fly past. Out of the 1,500 counted, at least 750 were Chaffinches. Their increase gave a nice round estimate of 2,000+ finches being in the area. There were times when it was hard to believe that so many birds were present, with spells when hardly any were on show, and no calling heard. Then they appeared, not all 2,000 together, but in a loose arrangement that, from time to time, coalesced into an avian spectacle. With patience, they will appear, and perform. One for the memory bank. 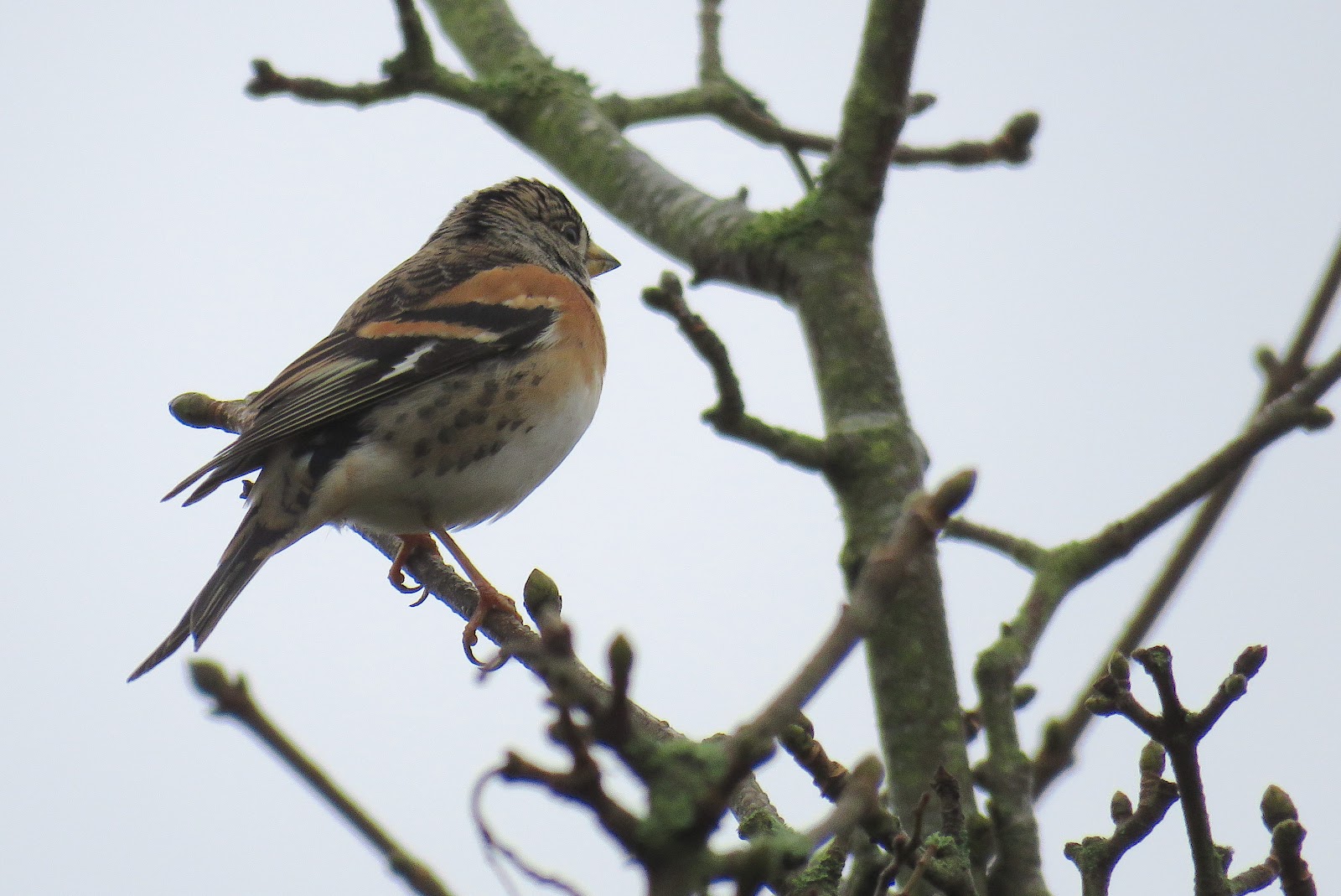 Zach Pannifer said…
Awesome stuff Steve. I am still yet to see such a big flock of any finches, so I might have to go and check this area out soon.
10 January 2022 at 21:36

Steve Gale said…
You will not be disappointed Zach. Pity that you were too late for the big Beddington finch and sparrow flocks of old!
10 January 2022 at 21:43

Tim Saunders said…
Thanks Steve - we enjoy your discoveries whether we shift ourselves or stay on our pcs / phones. It does seem like the clock has been turned back a bit this year, certainly for birds and flora.
14 January 2022 at 11:53