2012 and the string has started

January 07, 2012
There comes a time early in the year when the shiny newness of that year starts to become tarnished. The enthusiasm so abundant when you head out into the field, bouyed with the anticipation of great things to come, starts to whither. The belief that 'this is the year to beat all years' evapourates.

Yes folks, North Downs and beyond becomes a tad grumpy on the ludicrously early date of January 7th.

Today began quite well, as I arrived at Beddington Sewage Farm at first light to be greeted by roost-fleeing flocks of Jackdaws, some of them hundreds strong, at rooftop height. The tip and lake had already attracted several thousand gulls. Yesterday no less than three Iceland Gulls were present here (including a Kumlien's) so I thought that it wasn't asking much to be granted views of at least one of them - preferably the more exotic of them. For the first three hours of daylight, scouring the lake-loafing gulls had produced nothing.

I have a reputation at the sewage farm for dipping on birds when I leave the watchpoint to cover other areas of the farm. It is a daft thing to do, as observers are concentrated at the lake and many pairs of eyes make light work of what flies through. Some of the regulars never leave the spot for fear of dipping. In the past year my list of 'birds missed because I abandoned the watchpoint and went 'walkabout' includes Waxwing, Bearded Tit, White-fronted Goose and Bar-tailed Godwit. Today I can add Kumlien's Gull... 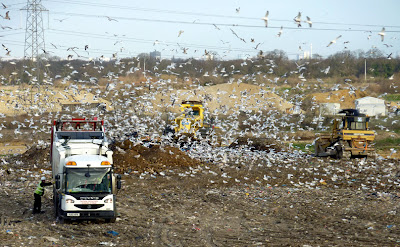 ﻿
Whilst wandering, I went up to the landfill site fence and took this picture of the gulls pestering the refuse vehicles. Now, I don't want to appear stringy, but I reckon that the 234th bird in from the left, partially hidden by the smudgy looking white thing that might be a Herring Gull (or even three Black-headed Gulls blended together) looks a good candidate for the Kumlien's. It was, after all, seen by a few other birders soon afterwards.
Is it too early in the year to start with the dodgy identifications?
Beddington Sewage Farm Kumlien's Gull

Rob said…
The big white one is a Dennis, I think.

Wishing you great things to come in 2012!

Stringing is all over the place these days. So many new halfwit birders who've found Bird Forum, think every bird is rare and probably also have a blog where they can shout from the rooftops and woe-be-tide anyone who casts doubt on their imaginative sightings.
7 January 2012 at 19:13

Gavin Haig said…
Nope, not too early Steve. Jan 1st is the traditional date to open the string account, usually before dawn...
7 January 2012 at 19:59

Remember this fable about the two Bulls.

The young bull spies some cows at the far end of their field and says to the old bull - Come on, lets run over there and grab ourselves a cow apiece...

Old bull responds with a knowing look and says - Tell you what, lets just walk and we'll get the lot....

Steve Gale said…
Rob: Best wishes to you too!

Steve: string has always been around, although it seems to be commoner now. Not many birders serve the apprenticeships that they used to 'back in the day' so do not gradually build up experiences. Thay might be why some of them snatch at identifications

Gavin: what night birds have you strung that early in the year? Calling Scops Owl? Roosting rare waterfowl?

Graham: in recent years I could combine several year lists and they would look paltry.

Bill: thanks for that. I was hoping a gull expert would put me right...