A gypsy in the garden 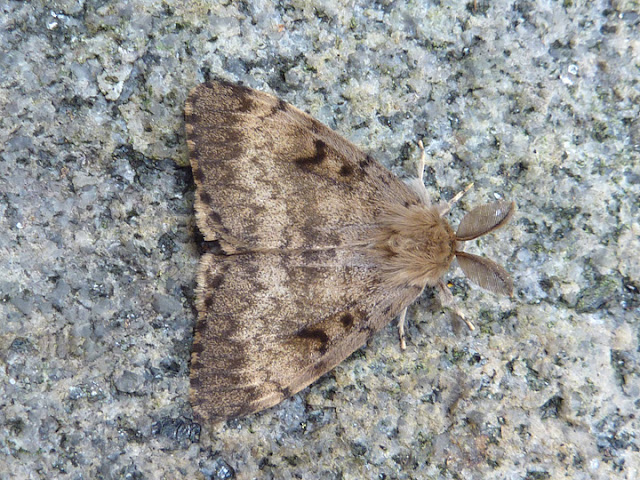 It was oppresively muggy last night, the temperature here in Banstead not dropping any lower than 18 degrees C. I woke from a fitful sleep at about 3AM and decided to get a drink of water and, while up, check the moth trap in the back garden. The MV is placed against a white wall and this wall was well populated by resting moths - mainly Willow Beauties, but also an individual that set my alarm bells ringing - where had I seen that before? It then registered that it was a male Gypsy Moth, a species I hadn't in fact seen anywhere, macro number 389 for the garden!

With the current weather conditions and plenty of migrant activity on the south and east coasts I would like to think that this is a primary migrant. However, there is a small population of this species in South London that DEFRA are trying to eradicate, so it could conceivably be a wanderer from there, although if I were a betting man I would bet against it. For all I know the men from the government have killed them off already.
at August 19, 2012

Brilliant. Disappointingly un-muggy and oppressive here and the garden traps were pants. I might have to start a 'moths I've seen on blogs but not in the flesh' list to keep up the interest ......

I'm being a bit greedy now Skev, but I want a Cydia amplana - they seem to be everywhere...