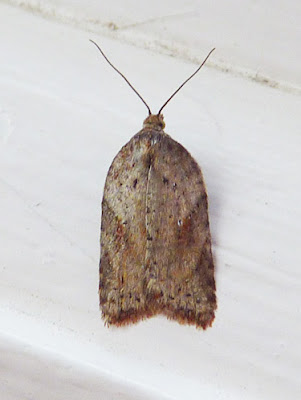 Anyone with an interest in moths will have noticed that the past couple of nights have been overcast, calm and mild - conditions that, even in the depths of winter, promise moths. Those trap-fulls during the summer may be a bit of a winter's dream, but I would still expect a few moths on such nights as these.

January 2nd provided a Light Brown Apple Moth and two tortrixes that were so plain that any attempt on my part to identify them was just a non-starter. Last night I trapped just the one, but it was a new species for me - Acleris schalleriana (left). This is a common enough micro which has so far eluded my detection (mainly due to my lax recording of non-macro moths). My efforts during 2012 to do a bit better in this department need to step up a gear this year.

As always, if any of the more knowledgable visitors to this blog disagree with any of my micro identification (or can suggest critical congeners that I may have overlooked), then do please let me know.

The mild weather continues, so the MV will stay out. I've yet to pick up a macro, and there are other traps in southern England that are already doing quite nicely.
at January 04, 2013