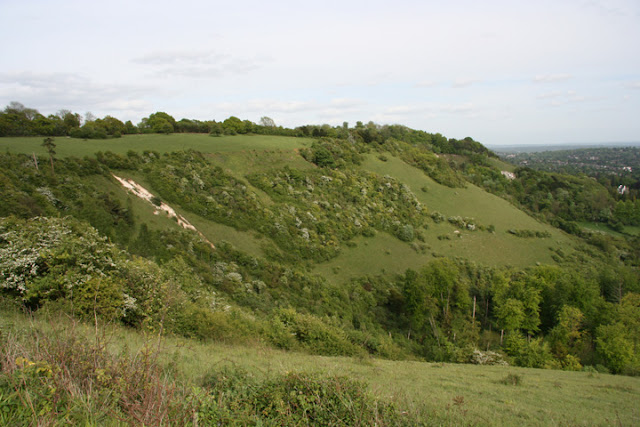 This is Colley Hill, west of Reigate and east of the Mole Gap. It's a south facing scarp of the North Downs and a place that I reckon should - should - be good for observing bird migration. My efforts so far to establish this site as such has so far resulted in a big fat blank.

My search for a local site that is a migration hot spot is ongoing and, to be quite frank, one of unfinished business. Apart from Colley Hill, I reckon that the mouth of the Mole Gap (at Dorking) and the scrub to the northern side of Epsom Downs are worthy of extended observation. All these, I am sure, would reap reward from concerted effort.

I do have one success, although most of this has been deflected to others. I first came across Canons Farm in 2002/3 and partially birded it in 2005-2008, this time of which was borne out of a certainty that the area had birding potential. My lone study did reveal a turnover of interesting birds (such as Woodlark, Goshawk, Golden Plover, Crossbill and a magnificent winter bird assemblage). It did take one young birding whirlwind to prove beyond doubt that this area was good - and he was enticed there by my modest findings. Therefore I'm convinced that these other places could be just as good.

So - what I need is redundancy, early retirement or a mass breakout of bunking off work to put my theories into practice... but I'm convinced that they would, over time, prove true. So, who out there wants to team up and try to put another northern Surrey site on the ornithological map?
at January 23, 2013

Good luck mate, get yourself a tam'o'shanter, and you could be the downs answer to DIMW!

Aye wouldnt we all....he's still my hero though:)