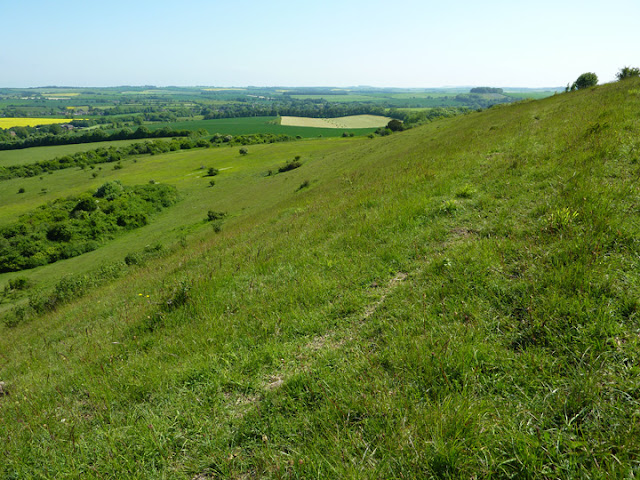 Yesterday was spent wandering over the chalk downland reserve of Martin Down in Hampshire. The sun shone, it was pleasantly warm and a stiff north-easterly kept me cool. It was altogether most agreeable!

I had been here once before (in 1981) in the company of Alastair Forsyth, after we had spent a day's birding in the New Forest. After a few beers in a nearby pub we slept in the reserve car park (me in his car, Alastair in his tent) and awoke to Barn Owl and Stone Curlew. 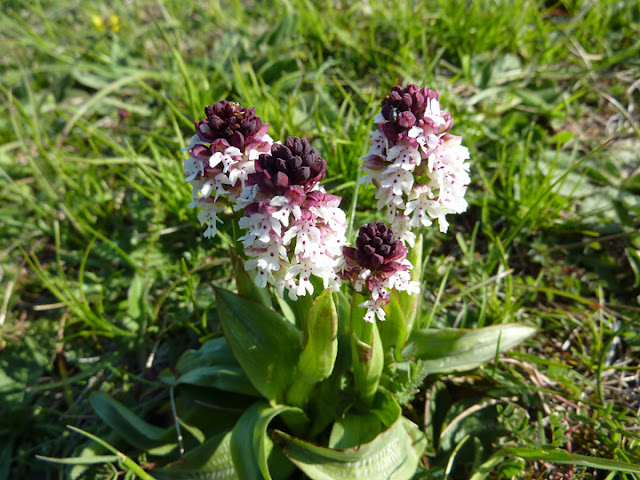 I began by parking at the car park on the A354 and walking the entire western length of the reserve along the Bokerley Dyke, a Romano-British defence ditch. This area appears to be as rich in plants and butterflies as anywhere else on the reserve, so if your time here has to be brief, concentrate here. Very soon I was finding Field Fleawort and Burnt Orchid (above). Apart from Horseshoe Vetch there was not a lot of the 'indicator' plant species of chalk downland out in flower. By now I would expect to see Bird's-foot Trefoil and Wild Mignonette all over the place - there was little of either. Orchid numbers were low and I only found two Butterfly Orchids (not yet fully out, so defying specific identification), four Green-winged Orchids and a handful of Common Spotted. 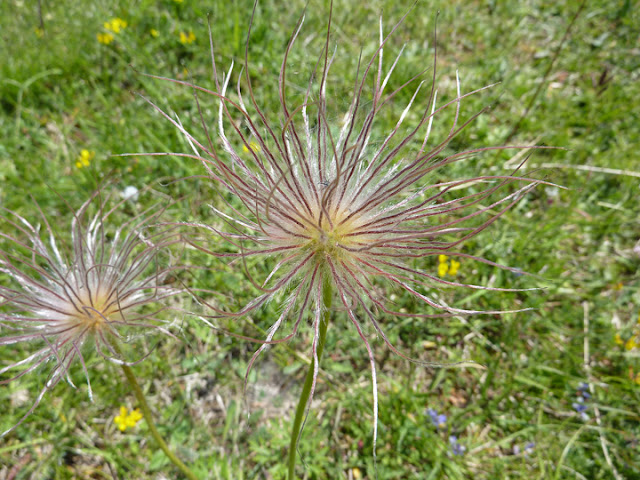 I was delighted to come across the seed-heads of Pasqueflower (above), here on the edge of its UK range. As gaudy and showy as the flowers are, I think these, along with Goat's-beard, have a far more interesting pappus.

As the day warmed up, the butterflies came out, but again in depressed numbers. Most numerous were Dingy Skippers and Small Heaths. Adonis Blue was easy to find with at least 10 keeping along the edges of the dyke. A single Marsh Fritillary defied being photographed. Other highlights included Small Blue, Grizzled Skipper and Green Hairstreak.


I explored most of this large reserve, comprising steep downland, farmland with plenty of hedgerows and small copses. The song of many Skylarks was a constant presence and it was an honour to be serenaded by purring Turtle Doves (this species demise is a modern tragedy). Although looking firmly at the ground and not birding, I did clock-up Raven, Hobby, Red Kite, Common Buzzard, Cuckoo and Lapwing. As I returned to the car as the afternoon wore on I came across an area of grassland that had been scrapped clear of vegetation to try and encourage Stone Curlews to breed. Echoes of 1981...

I have to end on a more sombre note. Invertebrate numbers were awful. On such a sunny and warm day I should have been surrounded by bees, wasps, flies, beetles, butterflies and moths. I wasn't. At times there wasn't a single one on show. This is downland in June on a good day - the flowering season might be delayed, but there were still plenty of flowers out to visit. Worrying.
Adonis Blue Burnt Orchid butterflies Martin Down plants

Steve Gale said…
We really must organise a late summer visit for you to see some of these 'southern' butterflies Stewart - Adonis, Chalkhill, Silver-spotted Skipper - all guaranteed!
9 June 2013 at 14:24

Steve Gale said…
I totally agree with you Gill. For such an open habitat it holds a wealth of wildlife. We are lucky in the south to have so much of it.
9 June 2013 at 18:19

laurence.d said…
Lets hope it IS just a bad year,butterfly numbers can recover amazingly quickly from low numbers of adults,its this years brood survival that will count.

Steve Gale said…
Hi Laurence, I hope you are right. It's not just the butterflies though, it's all the other inverts as well. Let's hope it is all just cyclical.
10 June 2013 at 11:04