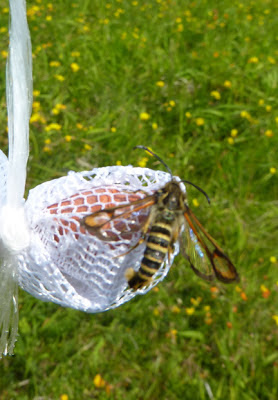 The very poor image to the left is nothing more than a celebration of the fact that my clearwing pheromones do actually work. After several failed attempts for various species I was beginning to wonder if I had a duff lot. You could blame my choice of habitat, or, more likely, the lateness of the season.

This weekend has been one of family commitments. On Friday, the weather forecast looked good for lepidoptera, but I knew that yesterday would be out of the question for any field work as a university visit to Southampton with my younger daughter was booked in.  As for today, a late morning start was on the cards to visit relatives at Shooter's Hill in south-east London. I sat in the garden this morning looking up at the perfect weather for clearwings (sunny, warm, light breeze) and then at the freezer where the pheromone lures wait. I checked the time - realised that I had an hour and a half spare - picked out the API lure (the pheromone with Six-belted Clearwing in mind) - and headed off to Chipstead Bottom, a place with plenty of this particular clearwings food plant, Bird's-foot trefoil. And, reputedly, it flies in the morning.

On arrival I suspended the lure (itself wrapped in a piece of net curtain) from a branch that was pushed into the ground. After seven minutes a single Six-belted Clearwing arrived and spent a couple of minutes flying around and settling on the lure. My attempts at photography were poor and I only succeeded in frightening the moth away. Another six minutes passed before a further moth arrived (a bit brighter than the first) and this stayed only fleetingly. I would have loved to have stayed longer, but I needed to be elsewhere. Job done!

Now, here's an opportunity. Shooter's Hill is only a short distance from Greenwich Park, which I happen to know has a healthy population of Yellow-legged Clearwing. I wonder if I can swing it?.
at July 07, 2013