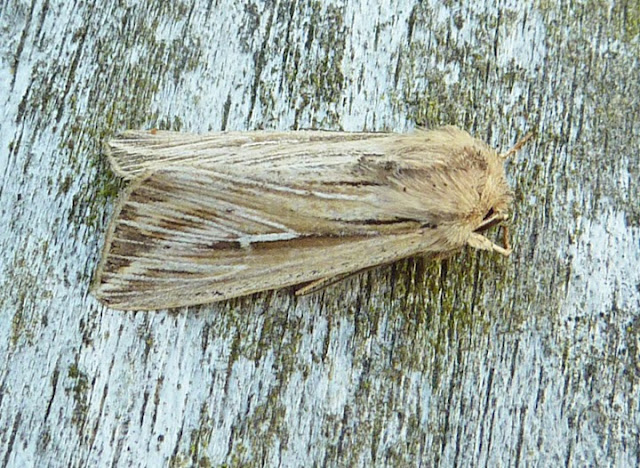 Where can you get a surfeit of food, drink, Tom Petty and The B52's? If you happen to spend the weekend with a certain resident of Littlestone in Kent, such rewards will be yours... but you will also have to put up with Ashes cricket coverage, a few jokes and much chat, but someone has got to put up with it and I bravely accepted the invitation to do so. Thanks Mark!

After admiring his beautifully tended and stocked garden I spoilt its ambience by putting out the MV trap. Despite Saturday night being breezy we recorded 35+ macro species, including Coast Dart and L-Album Wainscot (above).

During Saturday afternoon we dropped into Dungeness Bird Observatory where there was a gathering of the 'old-timers' from the 1950s, 60s and 70s (plus some newbies who have only been going to the shingle for thirty years). And what did the assembled ornithological minds talk about? Moult in gulls? Pipit identification? The demise of the Turtle Dove?. No, the subjects ranged from hip and knee replacement, blood pressure readings, cholesterol levels, bladder control, insulin dependency and falling libido. For once in my life I felt young and healthy! Someone pointed out that, when people get to a certain age and are asked how old they are, they will respond with "I'm sixty two next birthday", rather than actually give their current age. Young children also do this. Draw your own conclusions. Joking apart, it was marvelous to catch up with old friends or meet for the first time old legends. This generation were truly the birding pioneers who set the template that we all follow to this very day.

There was a great surprise for me when I returned home this afternoon, as a male Chalkhill Blue was feeding on the lavender in the back garden. I watched it for a couple of minutes before going to get my camera. You know what happened as I haven't posted a picture - it had buggered off when I returned.
at July 21, 2013