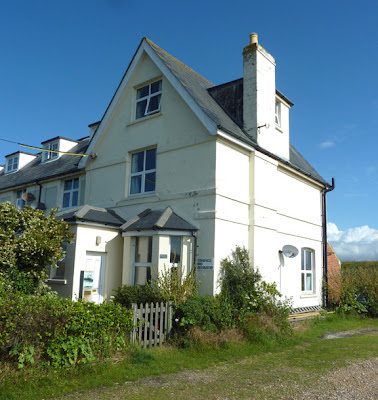 A long stay at Dungeness Bird Observatory (above) straddled these two months. For years, when a full-time working man, I longed after spending an entire autumn at DBO. Now that my employment is of a much looser arrangement, the time was ripe to ‘live the dream’. A whole autumn was a bit excessive, so I settled on a four week stay. November is an underrated month and is often overshadowed by its neighbour, October - but the former can be just as exciting and there is something about the dying autumn that has its very own vibe - so I was keen to spend at least the opening fortnight.

Although primarily a birding trip, there is much else to see at Dungeness. My stay did not coincide with any appreciable insect migration, and, apart from a handful of Red Admirals and Clouded Yellows, it was quiet. However, what was on show and grabbed a lot of attention was the late and profuse flowering of many plants. It wasn’t just a case of the odd bloom either. Species such as Sea Campion was rampant, carpeting areas of the shingle with white flower, bejewelled with the blue of Sheep’s-bit. Wherever you looked there was colour. On November 1st, with so much still out, I started to keep a list of those species still at it, and by the time I left the shingle (on November 14th) had recorded 136 species! Among the haul were two new species for the DBO recording area, Slender Speedwell and Marrow. There were times when I spent more effort looking for flowers than birds, and this added an unexpected additional dimension to my late autumn.

The birds were kind. The first 10 days were liberally sprinkled with goodies, such as Rough-legged Buzzard, Great Grey Shrike, Barred Warbler, Dusky Warbler and Yellow-browed Warbler. Over the whole four weeks a good back up cast was apparent: Sooty Shearwater, Great White Egret (9), Pomarine Skua, Long-eared Owl, Short-eared Owl (5), Woodlark (3), Dartford Warbler (3) and a flock of Crossbill. There were very late Tree Pipit and Common Whitethroat. Very early Smew. Numbers of migrants were not high, few arrivals were witnessed (although Black Redstarts put on a show on a couple of dates) and visible migration was modest and dominated by Goldfinches.

But joy came from unexpected places. A corvid roost at the Open Pits was an evening spectacle. A mixed Golden Plover and Lapwing flock numbered 5,000 and could not be ignored as they commuted between the RSPB reserve and Scotney. I dipped my toe in the muddy waters of ‘gulling’ and came up with a few Caspian. An intimate few minutes was spent with a Blackcap as it readied itself for a sea-crossing, restless among the detritus by the fishing boats. A leucistic Bittern was briefly seen in flight over the Hooker’s reed bed. As ever, a wonderful cast of characters made the stay full of friendship and laughs.

You could be forgiven for thinking that I didn’t do too much during the first two weeks of October and the last two of November. Time was spent locally, mostly at Canons Farm and Langley Vale Farm, but what with an upcoming trip to Dungeness (and then a post-shingle slump), expectations were not high and that conviction was ultimately not challenged.
Dungeness Dungeness Bird Observatory

Steve Gale said…
Thanks Derek, I took a look. I reckon that I underestimate flock counts. And I do like counting things!
11 December 2015 at 12:09